V For Violence – The Book of V 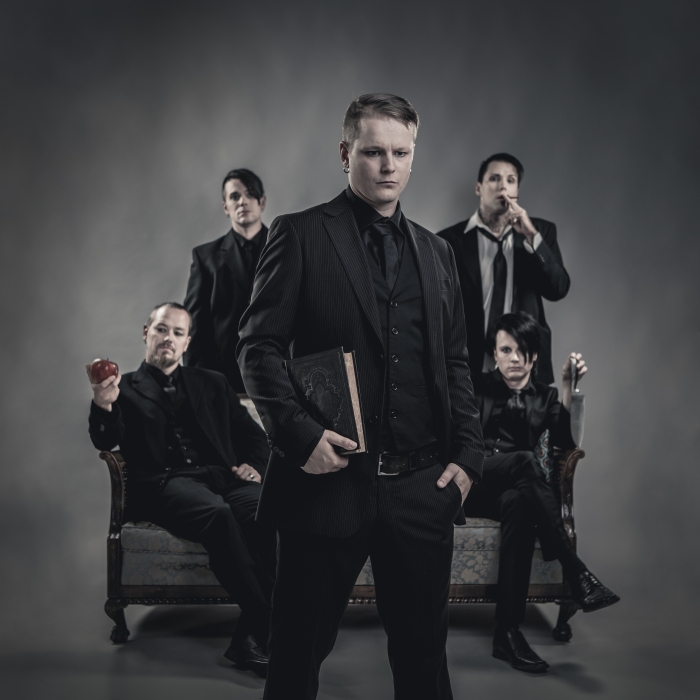 Finnish metallers V For Violence first made an attention nudging statement with up their debut album The Cult Of V in 2009, now after a fair time in the making they unleash its successor The Book of V. Vocalist Jarkko Lähderanta said of the band’s new offering, ”The Book Of V took years to get its shape and sound. We wanted to take the next step in songwriting and paid more attention on details.” It is an intent finding success as the eleven tracks contagion frisks ears and sparks the imagination, and though it easily lures references to other protagonists in the industrial/alternative metal scene and styles around it, the album is simply one rousing and thoroughly enjoyable ferocious stomp.

Formed in 2007 by Lähderanta, drummer Miikki Kunttu, and guitarist Janne Salo, V For Violence was soon luring ears with their first demo in 2008. Its track/video Boy Called Fucker was a swift spark in the band being eagerly devoured by fans and media too, helping lead to their signing with Osasto-A Records soon after for the release of the 2-track single Constant Of Death in the summer of 2009. It was a strong teaser to their impending debut album The Cult Of V released in the November of that same year. The full-length was a well-received proposal pushing the band towards stronger spotlights backed by a live presence which by this point had already seen V For Violence support Hardcore Superstar and in turn going on to the sharing of stages with the likes of Die So Fluid, Cold Cold Ground, Amorphis, Hypocrisy, Underoath, and Architects at shows and festivals. Now with bassist Jani Rahkonen and guitarist Riku Vuorio alongside Lähderanta, Salo, and Kunttu, V For Violence have the long awaited The Book of V poised and ready to stir up the metal scene.

And that it pretty much does even if its originality is locked in the arms of open familiarity to a few heavyweights. Like a fusion of Fear Factory and Marilyn Manson in league with Dope and Powerman 5000, the album and opening track, The Halted Saint explode on the senses with anthemic ferocity. For some you suspect that recognisable air might not work as well as for others, but V For Violence bring their own raw and aggressive twist on things too ensuring that each track has something fresh and extra to say and certainly grip a demanding appetite and imagination by. The band’s new single clouds ears with thick industrial smog but swiftly sends sinewy tendrils of guitar and scything rhythms through it as the climate begins to clear on a corrosive and quickly addictive stalking. Those previously mentioned references straight away work on thoughts as too Society 1 in regard to the caustic and impassioned, bordering on sexual, intensity driving the encounter. Grooves and hooks just spark whilst the strong vocals of Lähderanta roar with expression and incitement for an outstanding start to the album’s fury. 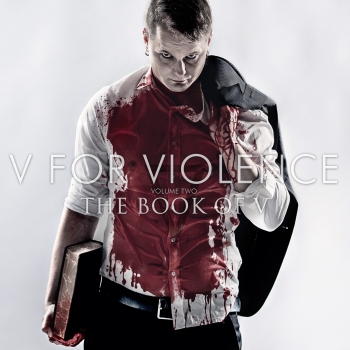 The potent beginning continues with the predatory prowl of The Downfall Pt. I: To Feel Alive. Initially it smoulders within imposing walls with mellow melodies and vocal coaxing but is soon building a volatile atmosphere and intimidating lining of textures, though still dipping into its elegant reflective heart throughout. Once more Manson is an obvious comparison to a song which at times has you drooling and in other moments simply fascinated by its adventurous nature and spicing.

Never Enough uncages the darkest bestial bass riffs and salacious grooves next, splintering them with vocal bellows and psyche gripping hooks to get very greedy over whilst Like It Like That and I Need You spew inescapable virulence in their individual characters. As most songs, choruses conjured are like infection dosed traps, impossible not to be fully involved in whilst around them creative snarls and in the latter of this trio, sinisterly dramatic nuances toy with the imagination. It is fair to say that a few songs share a closely seeded template but many, as here, create from that something strikingly inventive and captivating.

Band and album continues to hit the spot as tracks like the carnivorous A Place To Fill with its electronic festivity and guitar led twists, and the wonderful sonic groan and intimate melodies of God On Trial just ignite the senses. The second of these two is another major pinnacle in the album, every minute a cauldron of emotion and flirtatiously venomous enterprise equipped with unpredictability before it has to make way for Sodomedia which rivals it with its own hellacious and irritable industrial grooving. Once more limbs and thick involvement in the tempest is unavoidable, the breath taken too in the exhausting pleasure consuming the senses

The following Not A Word with its more hard rock seeded swagger lacks the spark and triggers of its predecessors yet again has a keenly persuasive impact on ears and satisfaction whilst What The Fuck! throws its attitude out with zeal, rhythmic and vocal relish fuelling the Five Finger Death Punch/ American Head Charge spiced confrontation.

The Book of V closes with the sweltering croon of The Downfall Pt. II: Amourageddon, its initial acoustic and emotive smoulder again as in Part 1, rising to dense intensity and melancholic ire whilst this time embracing classical and symphonic hues alongside an evocative industrial climate. A relative slow burner compared to other tracks within the album, it constantly evolves and reveals new treats to bring the release to a fine conclusion.

Fair to say we greedily devoured The Book of V and continue to, each track a tasty slice of invigorating fire and hostility. If any of those previously mentioned comparisons do not work for you than possibly V For Violence will struggle to persuade too but for the rest, this is one easy to recommend incitement.

The Book of V is available now via Inverse Records.