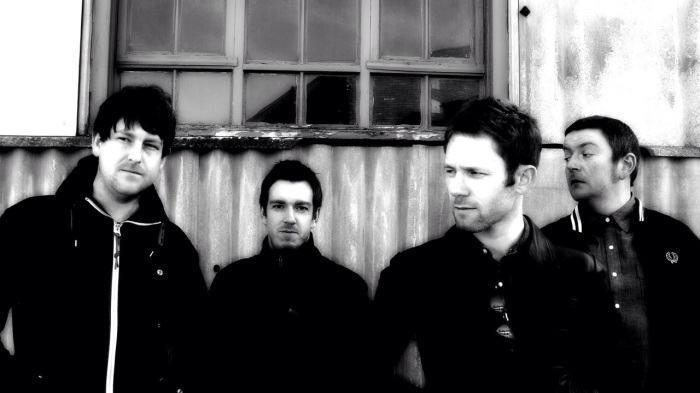 UK rockers MountainJam first got in touch with their double A-sided debut single around a month ago, the release just one moment in a busy time since the band emerged in March of this year. Since then the Hinckley based band has released another track, those three subsequently making up part of a self-titled EP released just a matter of days ago. All songs have introduced to ears a band with experience in their blood, craft in their hands, and passion in their hearts, and also some rather juicy songs.

The seeds of MountainJam pretty much began when vocalist/rhythm guitarist Dean Dovey met lead guitarist Andy Varden and bassist Nick Roberts as part of Midlands rock band The Silent Union in late 2013. Early 2015 the trio left that band, linked up with drummer Pez, a long-time friend of Varden and Roberts, and stepped forward as MountainJam. In no time a clutch of demos were written and recorded, with live shows just as rapid a move with their first being at The Soundhouse in Leicester. July saw the Jealous Of Me/Lust single unveiled to eager responses with third track The Lord of My Hours revealed soon after to more positive responses. As August closes its eyes, the band have now released their first EP made up of those three songs and two more quietly but firmly imposing incitements.

Musically the band finds hues in the inspirations of bands such as The Who, The Doors, Cream, Small Faces, The Charlatans, and Stone Roses to colour and inflame a sound which has a potent air of nostalgia but equally a real freshness and vitality to its energy and invention. Lust is a perfect example, its romps with ears and appetite with a blend of sixties and nineties guitar rock yet creates a presence which if not quite unique is recognisably individual. Its early caresses of guitar are soon veined by a spicy melodic acidity cast by Varden, this in turn leading to the addition of crisp rhythms and the mellow but fiery tones of Dovey. The stroll of the track is controlled and at times reserved but the sultry lacing of melodies are bewitching and the middle section when its chorus is as inescapable a hook as you could wish, magnetism.

Jealous Of Me has an even stronger feel of sixties/seventies rock, its first breath and spread of riffs carrying hints of bands like Small Faces and occasionally Bad Company. Continuing to swing more rigorous rhythmic hips and flirtatious riffs and grooves, the track has body and appetite fully involved in no time. Again it has a familiarity to it which only works in its favour and a tenacity which just rouses the energies of the listener and a want for more.

The Lord of My Hours is cut from the same feisty cloth, a healthily energetic encounter infusing even richer bluesy spices into its winding grooves, dancing melodies, and engaging vocals. Rhythmically the song is a festival, Pez never quite uncaging a full-on stomp of beats and percussion but providing an addictive shuffle which the thick bass lures of Roberts court with relish and enterprise. The track is irresistible to feet and appetite, rich enjoyment which is found again in the emotively and resourcefully lively Maybe Next Time. One of the other two songs making up the EP, it has a grip which is more of a nineties guitar escapade but again comes thick with essences and textures bred in earlier decades to grab the imagination and further keen involvement.

MountainJam also show they are adept at serenading the senses with the sultry shimmer that is Shadows of your Mind. The guitars glow with melodic, almost surf rock like charm whilst Dovey provides a similarly enticing croon to the gentle canter of a song, whilst the additional keys adding the cream to the flavoursome treat. The influences of psych rock come through vibrantly across the song and though, as the last one mentioned, it fails to quite match up to the success of the other three songs for personal tastes, it leaves a warm glow and oozing satisfaction in its place.

Looking at songs in the order we came across them instead of the track order on the EP, they all unite to provide a very pleasing potential loaded introduction to MountainJam. They are a band hard not to see luring greater spotlights and success upon them as they evolve and simply gets more time and experience under their young belts as a band.

The MountainJam EP is available now at the band’s Bandcamp profile.