Seeding their own devilish riots in old school punk bred both sides of the Atlantic, Pennsylvanian rockers Scanner unleash their third album to keep the aggressive roar of nostalgic and organic punk rock snarling. There is plenty more essences to the thirteen tracks making up Splat, variety as keen as the attitude fuelling the release, but ultimately album and band is raw rock ‘n’ roll in heart and temptation.

Scanner was formed in 1979 by vocalist/bassist Joe Brady and guitarist/vocalist Junnie Fortney, the band name inspired by the David Cronenberg film Scanners after Brady read about it in a monster magazine. Pretty soon the band was stirring up attention and a loyal following throughout the Central Pennsylvania, Maryland, and Washington D.C. areas. Their sound embraces inspirations from 50’s rock and roll, 60’s hard rock and surf, and 70’s glam and punk, honing it into the band’s own horror/ punk rock, surf and garage punk exploits. 2012 saw the current line-up come together with the addition of drummer/vocalist Troy Alwine, with a year later the trio releasing debut album One Foot In The Grave, And More Pissed Than Ever. It was an acclaimed introduction to the band for a great many and confirmation of the qualities Scanner fans had been enthusing about for the previous pair of decades. Last year was marked by the release of Exploding Heads in Harrisburg – Live Recordings From 1982, a live album of old material as well as the Monsters Axes & Choppers EP from Brady’s other project, horror rockers Losers After Midnight.

With the Brady conceived and produced 45 band strong critically acclaimed benefit compilation album Assault & BATtery, which raised funds for Bat World Sanctuary, also on the CV for 2014, Scanner now set sights on the broadest attention yet with Splat, and as soon as opener Fist in the Air has ears gripped and emotions elevated the thought is that punk fans of all ages and eras need this encounter in their lives. The track quickly ensures the listener is following its title, its opening throaty bassline the lure into familiar yet refreshing punk riffs and sonic spicery. Attitude is ablaze as the plain but inviting tones of Brady incite lyrically and in expression, his bait an easy involvement within the more calm but forceful blend of crisp rhythms and raw riffs. 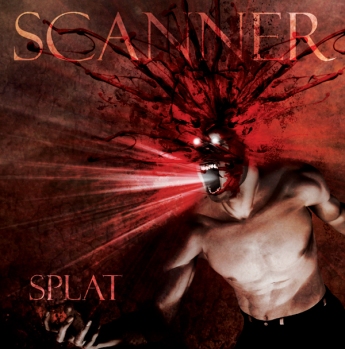 The strong start is soon overshadowed by Just Like Bela, the band’s horror punk invention lining the predatory gait and design of the song. There is a healthy whiff of Misfits/Wednesday 13 to the encounter but its own character shines through, especially with the inventive mix of vocals and hard rock enterprise which frees itself. As it eclipsed its predecessor, so the track is outdone by the outstanding Living Life to the Emptiest. The third track has the edge and air of Dead Kennedys to its belligerent and anthemic confrontation, entwining it with great slithers of melodic acidity from Fortney’s guitar and punching it through with the raunchy bass and whipping beats of Brady and Alwine respectively.

A rapaciously commanding cover of The Angels’ Straight Jacket comes next, the song given a no frills make-over and emerging with a feel of The Saints to its richly satisfying punk ‘n’ roll, before Biker provides its own seventies inspired enticement. The song takes ears and thoughts right back into the breaking storm of punk rock, its DIY feel a bracing two minutes of raw endeavour and tenacity.

Letter to the Government spills seventies glam and southern dirt rock revelry in its political attack within a bluesy entanglement of sound and enterprise whilst Running Riot sees Scanner take on the Cock Sparrer’s street punk classic to captivating success before haunting the psyche with Ghost Song. All three tracks have ears and emotions fully enlisted but it is the last of the trio which seduces the imagination and passions most. Its surf/psychobilly climate has echoes of The Meteors and Tiger Army to it but, as with all songs, variety is a vocal part, here punk and seventies garage rock bring extra juicy hues.

The Turbonegro meets Jello Biafra smelling Queen of the Stage has the body bouncing around next whilst a broad smile and further burst of pleasure is sparked by the band’s reworking of Bowie’s Suffragette City. The song has everything which you will have enjoyed in the original but roughed up and twisted around a bit, resulting in a great version to rival any other you may have come across.

Mischief and humour is as much a healthy asset as the flavours and invention of the Scanner sound and all give a fun time in Yeah We Suck, a round-up of ‘advice’ they and most bands will have gained at one time or another. That urge to have a ball continues in the album’s title track, an infectious brawl of virulence which is for the most instrumental but does have a lyrical bounty consisting of just its title being repeated with increasing relish. It, as most before it, has a claim for best song within Splat but the favourite spot gets grasped at the last moment by closing song Kaw-Liga. A country music song written by Hank Williams and Fred Rose, and covered by the likes of Johnny and the Hurricanes, Del Shannon, Roy Orbison, and The Residents over the years, Scanner turn it into a dark rock ‘n’ roll predator. Riffs and rhythms almost stalk the senses as the outstanding blaze of vocals ebb and flow across its sinister surf spiced landscape. It is only half the adventure though, the band breaking out into cow punk devilry too, switching between both provocative contagions throughout for one riveting and thrilling romp.

The US hailing Scanner might be an unknown secret right now but they hopefully and should not be for much longer as Splat trespasses on increasing numbers of ears for an increasing awareness. Go get some is our suggestion.

Splat is out now.