With the release of third album In the 876, Richie Campbell shows exactly why he is revered in his homeland of Portugal and becoming one of the most greedily devoured propositions in global reggae. Also infusing rich essences of soul and Latin flirtation into an array of individually distinctive songs, Campbell and album has the body bouncing and ears smiling.

Already drenched in acclaim and rabid attention which has seen the album hit the top of the Portuguese iTunes Charts within 2 hours of its European release in May, In The 876 now gets its UK unveiling with anticipated similar reactions going its way. Recorded between Kingston and Lisbon, and with a title referring to the telephone area code of Jamaica, In The 876 features numerous guests and is the next potent step in the seemingly unstoppable rise of Campbell and his creative stature. The Lisbon hailing singer/songwriter began concentrating on a solo career from 2010 having played in bands over the previous six years. Debut album My Path came out as a free download and subsequently amassed over 250,000 downloads which in turn led to Campbell playing a sold-out show at Lisbon’s Campo Pequeno Bullring. Second album Focused was just as well-received and successful, gaining a nomination in the Portuguese Golden Globes of 2013 and seeing its lead track, That’s How We Roll, awarded Song of the Year at the National Radio Awards.

Now is the turn of In The 876 to arouse thicker spotlights and awareness, in the UK and around the globe, and it gets off to a mighty bang, after its intro like title track, with I Feel Amazing. One of the singles from the album which has already earned potent radio play, the song is pure reggae flirtation. Its rhythms swagger with infectious beats aligned to bass spawned hips whilst guitars and vocals swing with virulent contagion and melodic seducing. From the off, the warmth of sunny skies around optimism rich emotions swim through ears and into the psyche, the whole song quickly an irresistible incitement to dance and smile. Though three and a half minutes long it is seemingly over in a flash, leaving exhausted but over flowing enjoyment behind to be whipped up again a by another single from the album in Best Friend. 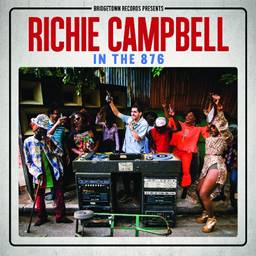 The second song has a mellower gait but is no less insistently catchy and melodically glowing, vocally and musically. Again keys and guitar incite a vibrant canter which has the body swaying incessantly whilst, as in its predecessor, a familiar but refreshing character only adds to its seriously persuasive climate. Vocally Campbell allows his naturally harmonic tones to entangle a more expected reggae seeded delivery resulting in something, as the music, instantly friendly and recognisable yet individual in character to most others.

The impressive start continues with Feels Like which features the wonderful gruff growl of Agent Sasco (also known as Assassin). The song is sublime temptation, its flow and melodies smooth over a canvas just rippling with character and diversity. There is a touch of New Town Kings and UB40 to the encounter and an instinctive romance between ska keys and ears. It is glorious and as it has body dancing and voice crooning, the lead thought is that this surely is a done deal as the next single.

The broader flavouring of the magnetic 25 to Life comes next, its emotive shuffle employing richer rock textures to a soul/reggae blending whilst Man Don’t Cry slips into a smouldering embrace graced with sultry backing vocals around another infectious rhythmic collusion of bass and beats. At times across the album Richie Campbell casts a sound which has familiar seeds in a musically hard to pin down landscape, and here that quality is at its most captivating best, with the song vocally and musically almost kaleidoscopic.

That’s Not Mine sees Jesse Royal guesting in its intimate yet wide social statement which has ears as absorbed by its lyrical jaunt as its aural jabbing and melodic tantalising. Thoughts of The Skints emerge as the song shows, like so many, glimpses and clearer twists of invention and imagination in all aspects before leaving full enjoyment in its wake which Get Over You uses to take ears and limbs into its own flirtatious dance. With the siren-esque beauty of Toian’s voice joining the scintillating escapade, the track boils like the surface of an aural heat wave, its relentless shimmer sizzling and pulsating surface unstoppable.

Both Give It All Away and Knock Me Out provide reasons for the imagination and body to rejoice, though neither can spark the same lusty responses as the tracks before them with personal tastes. The first is one of those songs which have the listener unconsciously lost in movement whilst its successor, which includes the guest appearance of Sara Tavares, is an embrace of soul and Latin elegance. Each fully engages but as suggested lack the same spark as the earlier adventures, something to a lesser extent which applies to the tenaciously lively and colourful Rise From We Fall and its reggae/rock pop samba.

In The 876 is concluded by firstly the excellent Standing Firm, a more formula reggae romp but given plenty of the Campbell Latin spice and vocal soul to fascinate and excite before Better than Today brings it all to a soulful close with provocative keys, emotive vocals and harmonies, and a melancholic jazz lined air. In many ways the song does not quite fit the rest of the album, or shouldn’t but it only provides a powerful end whilst revealing more of the impressive depth within Campbell’s writing and invention.

Exciting us most in its first half but only offering a thickly enjoyable time from start to finish, In The 876 shows exactly why the reggae world is excited over Richie Campbell. It is the UK’s time to explore and get involved with his riveting sound and songs now, and no doubt to get excited too.

In The 876 is released in the UK on August 28th via Chet Records.