If I Die Today – Cursed

There is a torment in the heart of the new album from Italian post-hardcore band If I Die Today, and a tempestuous air which lives up to any ideas inspired by the name Cursed. There is also an invasive and at times punishing darkness and emotional trespass coursing through the veins of the encounter but equally an imagination loaded, gripping enterprise which ensures it easily stands out against any other similarly sculpted and bred offerings. Cursed is destined not to be for everyone, and will frighten many off with its searing intensity and emotion  but there is no escaping that it announces If I Die Today as one of the more fascinating incitements in the post and hardcore scene.

If I Die Today emerged in Mondovì in 2007 and by the early months of the following year had released their self-titled debut album through Wynona Records. The release enabled the quintet to tour their homeland and share stages with numerous bands, that success reinforced by the You Are Alone EP in 2009, again unveiled to strong and positive reactions. It was the same with second album Liars the following year, its potent presence luring greater attention and acclaim cross Europe, the band following it with shows across Italy, Hungary, France, and the UK as well as playing alongside artists such as Sum 41, Offspring, No Use For A Name, Simple Plan, Face To Face, Taking Back Sunday at Bologna’s Independent Days Festival. The band’s workload and reputation continued to grow as 2012 saw the release of the Postcards From The Abyss EP and If I Die Today playing with bands like Every Time I Die, Good Riddance, and H2O as well as going on a tour taking in Russia, Ukraine, Germany, and venues back home. Since then more venues and countries have been scorched by the band’s sound, before and after the recording of Cursed last year, which with its worldwide release through Sliptrick Records sets a new chapter in the rise of If I Die Today. 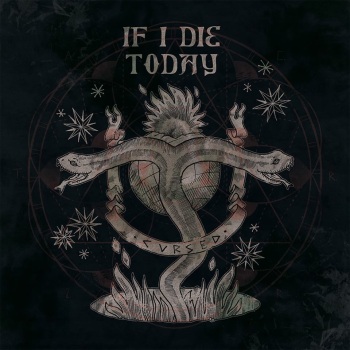 It’s opening handful of seconds are an inviting temptation but in no time Jesus becomes a searing sonic wind blowing over thickly jabbing rhythms and coming loaded with spicy hook lined enterprise from the guitars. Vocalist Marco Fresia roars just as swiftly and intensely in the tempest whilst the caustic breath and heart of the track is perfectly tempered by the magnetic lure of the throaty bassline from Morgan Ferrua and the controlled rhythmic dance cast by drummer Davide Gallo. There is no escape from the sheer energy and emotional turmoil of the song though or its flesh scarring sound with its virulent onslaught as gripping as it is intimidating.

In the sheer wind tunnel like delivery of the song there are essences of bands like Kabul Golf Club, KEN mode, and Statues in its creative adventure and tenacity, a potent mix continuing in Adams which is another instant arousal of attention and appetite with thumping bold beats and bracing vocals. Settling down a touch once established, though still a bruising confrontation, the guitars of Antonio Aresu and Michele Testa spin a web of raw aggression and intricate sonic seducing whilst the bass creates another deliciously alluring and individual line of bait. As its predecessor, the song is an epidemic of punishing and invigorating incitement, pure abrasive adventure to get your teeth into and drool over before it fluidly flows into Lucifer and its own exhausting tempest of scarring emotion and increasingly volatile and creative ferocity.

Through Patrick and Elisabeth, band and album continues to wither flesh and create emotional tension but again with plenty of fresh twists and adventure to their canvases. The first of the enthralling pair comes in a hostility lit slow shuffle with numerous expulsions of energy and vocal angst but also tendrils of flirtatious grooves and addiction breeding rhythms. There is no compromising with an If I Die Today proposal and no chance of being subjected to anything mundane or predictable as shown by this and its successor. Elisabeth maybe offers less uniqueness within the album than other tracks but it too is ripe with seriously enticing slithers and caresses of sonic ingenuity and melodic seducing, all resulting in less than two minutes of exciting violation.

Faustus borders on barbarous with its bestial weight of sound and energy but counters it with a tapestry of punkish hooks and twisted sonic imagination that simply whips the passions into a maelstrom of lust whilst The Ancient Mariner prowls the psyche and taunts ears with its fusion of noise rock and punk in stormy hardcore antagonism. Both tracks are glorious, adding their full thrilling and inventive weight to the unrelenting persuasion of the album.

An even fiercer punk venom courses through Vincent, the song openly revealing the inspirations of the band with its Every Time I Die meets Converge like onslaught. There is plenty more in the depths and brutish body of the song of course, lots to get greedy over before the album’s title track gives Cursed a whole new climate to explore. The band is tagged as post-hardcore but the closer is the one song which perfectly fits that billing, the rest a wonderful bedlam of styles and flavours. With a blackened and frosty air to its invasive ambience over hauntingly cold scenery, the track is an inhospitable drift through a dark and emotionally tortuous landscape compellingly bringing the album to a highly provocative and startling end.

Instantly gripping, Cursed only gets more powerful, persuasive, and emotionally penetrating with very listen. It certainly lingers and leaves scars in its wake too, but only to please and make demanding reasons to go back into its merciless majesty. If I Die Today is one of the truly exciting bands in the post and neat hardcore scene, Cursed shows exactly why.

Cursed is out now through Sliptrick Records.