Murder FM is another band which over recent times has been the subject of enthusiastic talk, their live presence, EPs, and singles sparking increasing awareness on both sides of the Atlantic. Now the band is poised to release their debut album and show all what the fuss is all about. Happily Never After is a rousing proposition, a collection of skilfully crafted and creatively eventful songs that just seem to lure attention back time and time again. It is hard to say that the release constantly set a fire going in the passions or is going to send a major tremor through the metal/rock scene, but there is no escaping that Happily Never After leaves ripe enjoyment whilst making a potent springboard for future and bolder Murder FM adventures ahead.

Hailing from Dallas, the band has persistently enticed ears with their tenacious fusing of varied rock essences and industrial bred metal. Early singles alerted a great and increasing many to their presence, lures reinforced by a reputation gaining live presence and a host of impressive videos, all luring in fan and media appetites alike. Over time the band has supported and shared stages with the likes of Rob Zombie, Deftones, Five Finger Death Punch, Black Veil Brides, Korn, Sick Puppies, Lacuna Coil, Pop Evil and many more across the US and into Europe. More recently the quartet of Norman Matthew (vocals, guitar, programming), J6 (bass, backing vocals), Matt X3r0 (guitar, backing vocals), and Jason West (drums) signed with Famous Records Global for the world-wide uncaging of Happily Never After, easily the strongest step yet in the band’s continuing ascent. 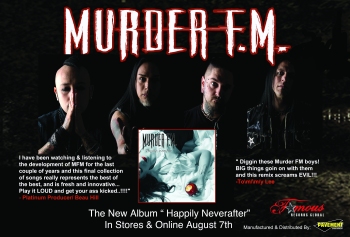 The album opens with Legion, a track which is in no hurry to own ears but instantly springs a web of engaging rhythms and electro bait crowded with enticing vocal roars. It is a restrained yet compelling lure which is soon stirring up a nest of fuzzy riffs and electronic sizzling as vocals prowl and in turn launch the anthemic heart of the track. In no time the song has an air of Korn meets Dope to it but equally has a scent of artists like Marilyn Manson and Society 1 whilst creating what is not exactly unique but certainly an organic character of its own. It is a magnetic and blistering start to the album, a masterful trap which has ears and appetite on board ready for what is to follow.

We The Evil is the immediate proposition, it similarly brewing up an industrial seeded tempest of sound rife with sinew swung beats and grouchy riffs from bass and guitar. Vocally too, there is nothing but attitude as well as great diversity as the band, led by Matthew, all add their individual and eager tones. Even stronger Manson like colouring wraps the track as it stirs up the blood and imagination, powerfully backing up its predecessor without major surprises but plenty of tasty endeavours.

The bruising weight and carnivorous riffery of Last Breath captures ears next, the gnawing of guitar on senses swift infection which only increases as the band imaginatively slips into mellower melodic scenery. With vocals matching the slightly calmer waters, it is a tantalising twist which becomes part of a great revolving surge across the rest of the track through both textured extremes; its success emulated by the punk/alternative metal hued Machine Gun Kisses which again has a Korn-esque feel to its rapacious enterprise and contagious swing.

Four tracks in and Happily Never After is on a thick roll of adventure and persuasion, and as if it ‘knows’ full persuasion is in hand, from this point begins exploring far more boldly varied and unique pastures. Firstly Burn steps forward with a Deftones meets Cold like offering, to be followed by the grungier metal soaked Slaves, both increasing in sheer magnetism over time. The industrial nature of early songs is now a more distant whisper, as Murder FM shows more resourcefulness and imagination in songwriting and sound, it is still not game changing but brings a fresh unpredictability and spice to ears and release.

We get slithers of Black Veil Brides and My Chemical Romance in the classic/modern heavy rock shaped Lethal Lovers next, essences which just seem to work if adding open familiarity to proceedings, whilst Like Glass offers an electronic coaxing and evocative keys initially, before creating its own emotional and musical drama honed from the same kind of template as its predecessor. Neither track matches up to the songs before them but it would be unfair to say they left satisfaction and a want to hear more barren.

With Happily Neverafter and Rainy Day Parade, Murder FM again please without finding the key to stronger reactions, and for personal tastes Happily Never After plays like a release of two halves, the first a storming and irresistible anthem of sound and insatiable energy and the second though arguably the more creative theatre of invention and adventure on the album, after Slaves lacking the kick and incendiary elements to incite the same instincts and thus passions.

Completed by a corrosive remix of We The Evil by Tommy Lee, Happily Never After is nevertheless nothing but enjoyment from start to finish and easy to recommend all taking a good listen to at the very least. We can only think Murder FM will get bigger and bolder with every passing release as the potential in this first album is realised with fresh imagination and originality. A happy thought indeed.

Happily Never After is available from August 7th via Famous Records Global with worldwide distribution by Pavement Entertainment.