British alternative/hard rockers Patriot Rebel provide raw and rousing rock ‘n’ roll as virulent as it is ravenously aggressive. They proved it with their outstanding Two Worlds EP in 2013 and do so again with new single Propaganda. The song is a raw and explosive confrontation, an anthem to get fully involved in straight away but emerging even stronger and more impressive with every listen.

Though formed around 2007, it was arguably when the current line-up of vocalist Paul Smith, guitarists Danny Marsh and Dave Gadd, bassist Will Kirk, and drummer Aaron Grainger came together that the Nottingham hailing Patriot Rebel found the truly potent spark to their sound and in awakening eager attention. Inspired by the likes of Stone Temple Pilots, Alter Bridge, Black Stone Cherry, and Velvet Revolver, the quintet created a musical proposal which was soon invigorating ears and appetites, shows with bands such as Tesseract, Jettblack, Skarlett Riot, Cornerstone, Earthtone9, Spirytus and Violet over the years the live proof and Two Worlds the potent studio evidence. The Matt Elliss (Black Spiders, Terrorvision, Skarlett Riot) produced EP certainly drew acclaim and keen focus from old and new fans as well as the media upon its uncaging, which the band’s live presence has only driven on and now Propaganda can only kick into greater reaction again. 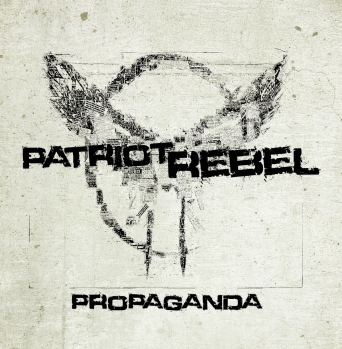 The single is taken from that earlier EP but manages to hold a fresh breath and character now standing alone as the band’s new protagonist. It is also a teaser of sorts for things to come, Patriot Rebel most likely in the studio, again with Ellis, as you read this. Sometimes tracks show a new light upon their depths and presence when taken away from an album or EP, and fair to say Propaganda, for whatever reason, manages to do the same as it roars from its opening second through to its last. From an initial sonic lure of a second of two, thumping rhythms prowl and riffs stalk the senses; their intimidation crouched over by the distinctive tones of Smith. The predatory start of the song and his croon subsequently triggers the embedded contagious might and stride of the encounter, grooves and melodies entangling in an irresistible tempting still graced by the formidable and throaty nature of bass and drums.

The song is a blaze of anthemic rock ‘n’ roll, luring the listener with its verse and leads into the irresistible chorus where full involvement from band and listener is a given. There are no truly major surprises within the song, the band’s influences open spices, yet it has a resourcefulness and enterprise which leaves expectations empty and enjoyment full to bursting.

Patriot Rebel continues to impress and though Propaganda is taken from their previous release it only thrills and ensures anticipation for the band’s next exploit will be greedy. Completed by a great acoustic version of Propaganda too, and accompanied by one equally enjoyable video, this is one single for new and old fans to spend a riotous summer with.

Propaganda is available from 3rd August.