Home › Music › This City Limits – Too Scared To Swim

This City Limits – Too Scared To Swim 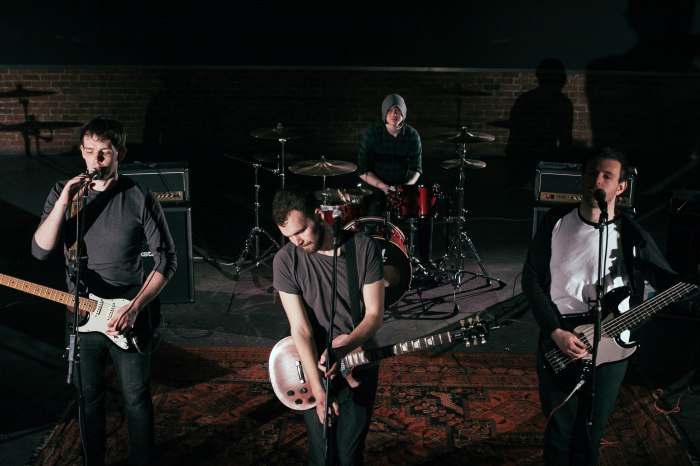 It is quite rewarding when a song does not initially make a big impact but leaves something behind, a lingering and persistent nudge saying ‘hold up, you might be missing out on something here’. So it was with Too Scared To Swim, the single from UK melodic punks This City Limits. It was certainly an enjoyable first meeting or two, but something continued to nag from it, elements repeating in the mind when away from its presence to lure attention back. It still does not compete as one of our very favourite songs uncaged this summer, but it ensures, whilst constantly pleasing ears, that the band’s upcoming second EP will be under close scrutiny.

Formed last year, the Leeds hailing quartet of brothers Will (vocals, guitar) and George Turner (guitar), Rob Burns (bass) and Josh Peters (drums) quickly made a potent statement with their debut EP Brittle Brass & Broken Bone. It easily lured the appetite of a growing number of fans with its potency, backed by the single Amputate which in turn stirred up greater media attention across national press and radio. Now it is the turn of James Hill produced Too Scared To Swim, as mentioned ahead of a new EP later this year, to rouse up national awareness with the support of a summer of shows and festival spots.

Vocals and guitars instantly descend on ears as the song opens up, both cast with emotion and open craft. Bass and drums are quickly there too, stirring up air and appetite with their feistier endeavour and attitudes as the melodic acidity and lure of the song blossoms a provocative and potent proposal. There are few big surprises in the song yet its contentment in switching its intensity and attack around is enjoyable and seamless. It has all the hallmarks of accomplished songwriting and skilled interpretation, two traits increasingly open in This City Limits.

Exploring a creative avenue reminding of bands such as Mallory Knox and We Are The Ocean at times, Too Scared To Swim suggests that This City Limits is still on the journey to find a standout sound distinct to them but they have found a presence and creativity which is not that far away. Maybe the new EP will unleash that next step, but if it is as likeable as Too Scared To Swim there will be few complaints anyway.

Too Scared To Swim is available from July 27th with accompanying video.