Fusing a great blend of nineties rock and pop punk into a modern alternative rock invention, Italian quartet Celeb Car Crash have a sound which feels simultaneously fresh and familiar. It is a mix which makes their latest EP, ¡Mucha Lucha! an adventurous but equally, an instinctively enticing proposition. Bringing three varied and fiercely magnetic slices of melodic rock ‘n’ roll to bear on ears and appetite, the release alone suggests that Celeb Car Crash are pushing towards major attention.

Consisting of vocalist/guitarist Nicola Briganti, drummer Michelangelo Naldini, guitarist Carlo Alberto Morini, and bassist Simone Benati, Celeb Car Crash emerged at the end of 2012 and quickly set about recording their first encounter. Ambush! was unveiled in the April of 2013, backed by the video /single Dead Poets Society. Gaining strong attention from fans and media alike, the album was supported by an extensive tour across Italy, Switzerland, France, and the UK and shows supporting bands such as Gotthard and Coheed and Cambria, all reinforcing the emergence of record and band. After another well-received single the previous year, 2014 saw the band again concentrate on tours and shows, ending with Celeb Car Crash winning the Red Bull Tourbus contest against 1700 other entrants, resulting in the band playing three shows as support to Lacuna Coil and the chance to record a new single. That was to be Because I’m Sad, the opening song and lead to the ¡Mucha Lucha! EP. 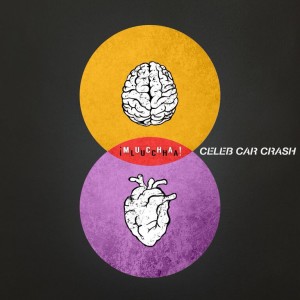 Backed by two unreleased tracks on the EP, the Olly Riva and Mario Rice produced Because I’m Sad gets things off to a gripping start. From its opening coaxing of acoustic guitar and the swiftly magnetic voice of Briganti, the song has ears in the palm of its hands, especially as the gentle opening soon sparks a feistier burst of rhythms and riffs. Quickly blooming greater colour and richer tempting through spicy hooks and anthemic enterprise, it continues to evolve, breaking into a tenacious canter reminding of bands like Everclear and Jimmy Eat World. It is a recognisable essence though which only adds to the potency and arousing drama of the song, and indeed its virulent infectiousness.

The following Next Summer has a more hard rock endeavour to its character but also a rhythm and blues spicing which has thoughts of Graham Parker hinting as it continues to explore its wiry walls and throaty canvas. Sharing the same boisterous energy as its predecessor and ripe with melodic flames and catchy hooks, the song shows another hue to the songwriting and sound of Celeb Car Crash, a raw and dirtier toning bred from more fresh and varied sources of rock ‘n roll gripping the imagination.

The EP is completed by ¡Adiós Talossa! (tututu), a sultry seductive affair from the off with warm emotive coaxing cast from the trumpet of Damiele Ravaiolli. Growing and blossoming with every passing minute, the bewitching track grows into a grungy pop punk affair around a compelling rhythmic stomp. Whispers of Green Day, Nirvana, The Mighty Mighty Bosstones, and again Graham Parker all seem to collude as a thicker aural colour continues to enrich a captivating encounter spawned from the band’s own invigorating ideation.

The opener and closer definitely steal the show upon ¡Mucha Lucha! but the thoroughly enjoyable Next Summer also shows that Celeb Car Crash have real variety and depth to their music and writing. A little late to the party, the EP is actually our introduction to the band but one which has sparked a keen appetite to see where they go next. An intrigue we will surely not be alone in.

¡Mucha Lucha! is available now via Sliptrick Records through most digital stores.