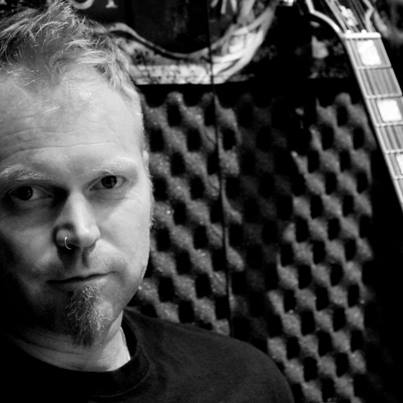 The first listen of Ruins, the new album from Austrian project Rusty Pacemaker, definitely caught ears and thoughts by surprise but laid the seeds to an increasing understanding and appetite for the artist and release’s particular uniqueness. It has grown with time into a compelling and fascinating proposition, one with aspects which still challenge slightly the success of the release, but an encounter which never lacks the ability to intrigue and thickly satisfy.

The band is the solo project of the Lanzenkirchen hailing Rusty Hessel, a musician who began making his own music in 2003. Heavily influenced by Quorthon of Bathory, Rusty enlisted drummer Franz Löchinger to play on his first album Blackness and White Light which was released in the October of 2010 on his own Solanum Records, a union which is repeated on the new album. Within a few months of its release, Rusty was writing new tracks for its successor and with preproduction finished in 2012, the Markus Stock mixed and mastered Ruins began emerging; its recording completed last year and release coming a few short weeks back. It is an encounter which commands attention and sparks the imagination, and even with a ‘flaw ‘or two, only leaves a contented appetite and certain captivation in its wake.

Ruin’s title track is the first engagement on ears and thoughts, opening with a tantalising melodic caress of guitar. It is melancholic yet vibrant and already from that stroking of strings, a gothic air kisses the senses. That whisper only increases as sounds and invention develop, and indeed once the striking vocals of Rusty join the tempting. His delivery is as distinctive and individual as the sounds cradling his monotone stance but also more of a challenge as they conflict organically and purposefully with the dark beauty of the music. At times across the album his voice simply flows with the tide of the emotion and tone of the music but in others, as here, wrong-foot and test song and listener alike. It has to be said though when working well or even not quite agreeing with personal tastes, his vocal presence, as the album’s, is a riveting texture and incitement. The song itself continues to evolve and explore fresh strains of gothic and dark metal, its atmosphere stark and intimately provocative simultaneously.

The following Made Of Lies is a more rugged and furious blaze of metal, rhythms and riffs a swiftly enticing confrontation breeding even greater endeavour and persuasion as it embraces sonic and vocal enterprise. Though predominantly a metal and heavy rock seeded offering, the track reveals a great eighties and nineties gothic/post punk nature to its shifting character, bands like Leitmotiv and Type O Negative coming to mind. The rousing encounter departs to be replaced by the opening lapping waves of Ocean of Life, a song growing into an evocative and poetically harmonious croon within dark and predacious shadows. It also features the siren-esque vocal charm of Lady K, her alluring presence perfect company to the more dour but resonance wrapped tones of Rusty. Musically as in the previous songs, the Austrian creates an enthralling landscape of ideas and flavours skilfully woven into passages which only lure the firmest attention.

The steely air and textures of The Game come next, its imposing death seeded tones the lead into an infectious shuffle within a fiery web of classic and melodic metal. The song feistily simmers in intensity and attitude, often unveiling a raw snarl to disrupt and complement the more restrained but piercing sonic tenacity entangling ears. Vocals ebb and flow in potency and note, but their element of discord so often only aligns to a similarly striking flirtation in sound.

Both Night Angel and Candlemass push the album to another level, the first a sorrowful piano and melodic seducing which perfectly suits the slow and plain dynamic style of Rusty’s vocals whilst again welcoming the bewitching voice of Lady K. Her appearance so lights air and song that it is easy to wish she was a more regularly hue to the album, it being no coincidence that many of the pinnacles within Ruins involve her presence. The folkish hue and serene elegance of the song’s sound is as mesmeric, potency emulated in its successor for different reasons. The excellent track is a haunting and imposing proposal, its darkly clouded sky and doomy breath invading cavernous like depths whilst colluding with sinister shadows. Yet half way in, a bright light expels XTC like revelry, a wispy charm sparking a fresh turn and endeavour to the tempestuous landscape of the song.

The swift acoustic enticing of Forever reveals the strengths and weaknesses of Ruins in its one minute plus before Matter Over Mind unveils its own creative bellow of imagination and inventive sound. Again thoughts are nudged by bands of the past, March Violets and Fields of the Nephilim whispering in ears as the song takes the listener on its own diverse and absorbing journey, but equally, as across the whole of the album, there is plenty more original ideation and sound going on.

Knowing is another where Rusty’s voice takes attention away from the gentle stroll of music, yet there is no thought of tearing away from his almost mischievous presence, which is good as the song is soon breeding muscle and drama with hungry snarling riffs and quaint melodies. Fair to say it is a song taking time to persuade, winning out by the time Pillow of Silence comes forward to complete the album. It also opens with a mellower air but is persistently brewing up a raw volatile climate which never actually explodes to consume song and senses but ensures even in its closing kiss of beauty, the track has a dark and menacing edge to it.

It is probably fair to say that Ruins will split opinions, mainly when it comes to the vocals. Acclimatising to their peculiar ‘oddity’ is worth the attention though as many songs use them as bold textures to the undoubtedly skilled atmospheres and sounds woven into the album. It is a magnetic and charismatic release making another potent step in the emergence of Rusty Pacemaker. Just one request to the man though, please use Lady K more, and if we dare suggest as the lead as there feels a potential show stopper with her tones leading Rusty’s striking songwriting and sounds.

Ruins is out now via Solanum Records