NG26 – Until My Heart Stops

In the hunt for some prime rock n’ roll which is maybe a touch low on major surprises but has all the attributes and invention, not forgetting rousing tenacity, to start a voracious stomp in a dance hall of wallflowers, then say hello to UK rockers NG26 and their new album Until My Heart Stops. Loaded with ten hard/alternative rock tracks soaked with metal aggression, the encounter is one accomplished and rigorously solid slab of heavy rock unafraid to flirt with melodic adventure or a nest of squirming grooves. Whether Until My Heart Stops will be the encounter to knock your socks off we cannot not predict but for an increasingly great and lingering time it is guaranteed to hit the spot.

The beginning of NG26 seems to vary, some reports saying it was the late nineties and other claiming around 2005 or so. Whatever the actual date, the Derbyshire quartet has risen from igniting the local rock/metal scene to sparking national awareness, primarily to their potent live presence and the release of the album Open Your Mind in 2011/12. Critically acclaimed by fans and media alike, the encounter spawned a trio of successful singles and just as eagerly devoured videos for each. More singles followed with praise and attention, as also the Devil’s Kiss EP of 2013, its tracks making a strong teaser for what now excites ears via Until My Heart Stops.

NG26 consists of two sets of brothers, Chris and Jon Topley, on vocals and drums respectively, alongside bassist Rob and sibling guitarist Rich Shaw, who also plays in Cradle Of Filth and the excellent Emperor Chung. It is a line-up soaked in experience which certainly explains the open tightness of songs and sounds fuelling the album, and is in rich evidence straight away as Never Enough sets things off in thumping style. A fanfare like flame of guitar is the first rich lure, quickly backed by plenty more in the shape of rousing riffs and scything beats. The snarling vocal tones of Chris, backed nicely by those of Rob, only add to the anthemic appeal brewing in ears, melodies and dirty harmonies adding their rich part to the infectious mix in matching potency. With a solo from Rich provides additional icing on the riot, the song simply sparks attention and a swiftly eager appetite. 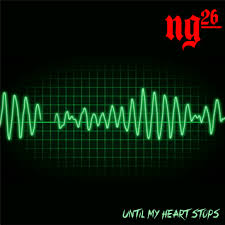 A blues scent spices the opening guitar enterprise of Daylight Breaks, but quickly expectations are left empty handed as the song slips into a mellow and reflective passage of vocals and enticing melodies, subsequently flaring up again to thrilling effect before going through the same magnetic cycle. The track does not quite have the same bite and rabid feel of the first in the end and in turn lacks finding the same success with personal tastes, yet it is a lingering and thoroughly enjoyable stroll setting up Save It For Me. The song unveils its own mix of alternative and hard rock which from a slightly underwhelming start, breeds a web of riveting grooves and agitated rhythms you would sell your granny for. The song epitomises the whole album in the way that whether individual tastes might not spark with particular moments of songs and release, something is always there on the horizon to stir up the passions again.

Barely Breathe sparkles with technical and sonic resourcefulness next, its body somewhere between Alter Bridge and maybe Periphery, and constantly keeping ears and imagination on their toes before being outshone by Afterlife and its bordering on psychotic jungle of carnivorous rhythms and ravenous riffs, all bound in spicily caustic sonic vines. The track is a major highlight on the release, its rabid ferocity and imagination channelled through the irresistible skilled and hungry craft of all four members of the band.

A more restrained air covers the following Cease Fire, though it cannot defuse the gripping rapacity of drums and bass or the impassioned energy fuelled the satisfaction filling encounter. Again shocks are few but adventure and enjoyment thick, especially with the vocal twist late. The same can be said of Out Of My Life straight after, another track bursting with the impressive individual skills and potent songwriting on offer, though it too has to give sway to one more peak in the album. Little Indiscretions is the most rugged and cantankerous track on Until My Heart Stops, a blistering mix of groove metal and melodic rock ‘n’ roll especially expelling its most addictive strains of persuasion when it is belligerently growling.

As the album draws to a close, the excellent You Sold Me Lies provides an intensive and dramatic tempest of emotion and compelling endeavour whilst in ending things, Song For Mozaz offers a captivating ballad aligning the expressive tones of Chris to the piano and stringed beauty provided by guest musician Ryan Noon. It is a fine end to the highly enjoyable album, a finish which also shows the strength of the singer’s vocals which at other times do not get, for these ears, the most understanding production on the album, occasionally Chris’ delivery struggling against the swamping strength of the sounds around him. It is a smallish issue for the main and certainly disappears with his impressive presence in the last two songs.

Overall Until My Heart Stops is a highly enjoyable release which might not get the pulse racing as much as it might but definitely gets the appetite wanting plenty more, a success many dream of.

Until My Heart Stops is available now via Holier Than Thou Records @ http://holierthanthourecords.bandcamp.com/album/until-my-heart-stops