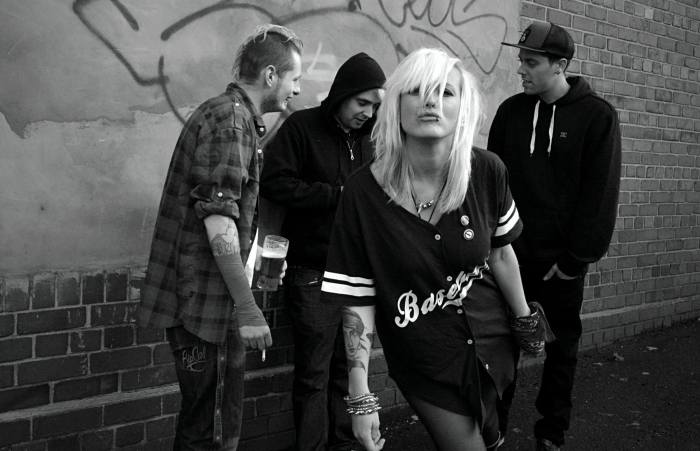 Building on a reputation earned from their first release and a live presence which has venues aggressively rocking, UK punks Brassick have released their self-titled debut album and fair to say whatever acclaim already garnered should be outshone by all offered this anthemic snarl. Raw and uncompromising yet loaded with a hardcore roar and fierce inescapable hooks to drool over, the release is poised to put the Birmingham quartet of the broadest punk maps.

Formed in 2012, Brassick quickly sparked local attention and support with their fusion of punk, ska, and metal essences. That presence soon gripped wider recognition through the band’s unrelenting live presence which has seen them play with the likes of GBH, Cock Sparrer, UK Subs, and Subhumans amongst many, and the release of the Broke And Restless EP in 2013. Last year saw the foursome continue to ignite the UK live scene, venues and festivals coming under their fiery growl and culminating in a highly successful spot at Rebellion alongside bands such as NOFX, Street Dogs, Stiff Little Fingers, Killing Joke, and The Duel. Already charging through Britain and Europe again this year with festivals and another Rebellion appearance on the schedule, Brassick have made 2015 their biggest year yet with the release of their rousing album.

Produced by bassist Jake Cunningham and guitarist Peter Macbeth, the album opens with Hollow Cries and sirens infusing cold portentous air. Punchy rhythms splinter the scenery next, all embroiled in a sonic mist before the song strides clear with anthemic riffs and rhythms sparked further by the instantly gripping vocals of Nicola Hardy. There is a great essence of attitude and snarl to her tones to match and incite the sounds around her, a pulsating bassline and inflammatory guitar enterprise colluding with the healthy swipes of drummer Jay Jay Khaos open evidence in two riveting and highly persuasive opening minutes.

The punchy exploits of Same Sound bound in next, riffs and beats a feisty lure reinforced by the vocal defiance of Hardy. The metallic edge and texture of the track reminds of US punk metallers Mongrel, whilst the scything expulsions breaking up the song midway are the trigger to adventurous twists before the assault returns to its initial confrontation and sets ears up perfectly for the outstanding tempting of Media Faces. Like early The Duel with a Ruts like reggae predation, the track prowls and roars, forcibly stirring up appetite and imagination through the magnetic guitar craft of Macbeth and the irritable infection of sound and vocals.

Fall Because They’re Blind backs up the potent start to the album though it does not have that extra spark to match its predecessors. Nevertheless with Cunningham’s alluring bass enterprise and an old school punk leaning around Hardy’s ever inciting delivery, the track hits the spot before Drown takes over to stalk the senses. Bass and riffs are a deviously intimidating nudge whilst the beats of Khaos refuse to hold back on their provocation but it is the inventive atmospheric twists and varied vocal persuasion that gives the track an extra impressing potency.

The lyrical and emotional charge of the band pulls no punches on political and social commentary, and breeds a strong and impacting landscape in Sirens where authority wails and anarchic ambience wash over ears as bass and guitar spin their evocative and dramatic web around Hardy’s spoken and accusing narrative. It is a powerful proposal which stands alone or works as the turbulent lead in to the brawling antagonism of Free For All and its UK Subs/Angelic Upstarts like old school growl. The song in turn allows no breath to be taken as it seeds the beginnings of the outstanding Cynical Ties and another stock of gripping irritancy, sharp hooks, and anthemic defiance. There is a great street punk dirtiness to the album and especially accentuates the power and addictiveness of this track and in turn its successor Let Us Go. There is a touch of The Objex to the heart and fire of the second of the two but equally a seventies breeding and modern fury come together to ensure another stirring up on the body and passions.

The grouchy tone and belligerence of Leeches nags and grumbles next, its angry belly bound in more of the unpredictable and striking imagination shaping songwriting and sound which to be honest the band does not use quite enough across the album. When they do it turns great songs into venomous enslavements as here, richly emphasizing the potential coursing through the whole of the album.

The fun and enjoyment comes to a close with the mighty Vagabond Smile. Instantly its rhythmic shuffle traps ears, the song is in control, tightening its grip and lure as vocals across the band come together in a middle finger raised defiance complete with virulent grooves, sharp hooks, and incendiary attitude. It is a riotous end to an invigorating and refreshing album. Brassick use their inspirations and the seeds of punk rock to create their own, not majorly unique, but seriously enjoyable rock ‘n’ roll. Already anticipation of bigger and bolder things from the band is ripe and right now thick pleasure full thanks to their first album.

Brassick is available now @ http://www.brassick.bigcartel.com/ and through STP Records @ http://www.stprecords.co.uk/page4.htm with CD version out September 18th.