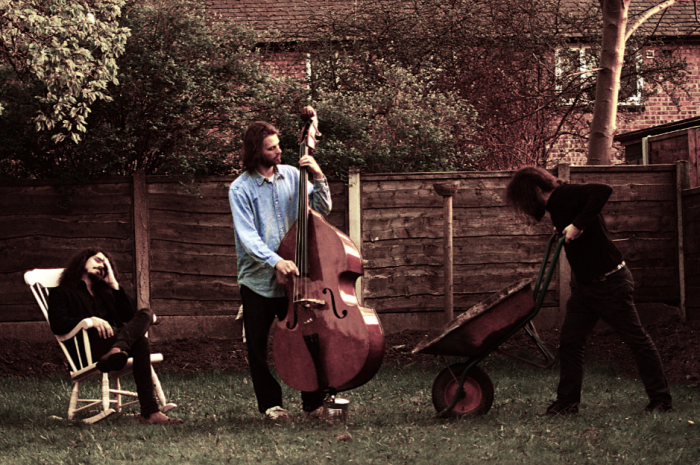 Listening to The Great Escape EP, thoughts wondered whether if Edgar Allan Poe was around today creating dark literary masterpieces, would he be listening to and most likely involving the music of UK based Old House Playground somewhere. Four tracks of dark rock ‘n’ roll bred with provocative blues climates and gothic imagination, all “with roots in the songwriting culture of traditional Greek folk music”; the band’s new seriously compelling EP suggests quite possibly yes as it thrills with its ripe bewitching drama and imposing atmospheres.

It was in 2009 that Old House Playground moved from Athens to Manchester to, in the words of their bio, “experiment with new musical paths and forms of expression.” Vocalist/guitarist Tryfon Lazos, drummer Andreas Venetantes, and bassist Conor Loughran were soon weaving inspirations from the likes of Tom Waits, Django Reinhardt, Nick Cave and Greek artists Psarantonis, and Marcos Vamvakaris into their own unique vision of an alternative rock/blues sound. The departure of Loughran before its recording saw debut album God Damn That Gold the creation of the remaining duo overseen by producer/musician Chris Evans. Its 2013 release via Evening Economies/Fat Bob Records was keenly received and praised, as too a UK tour in support of its unveiling. The band also ignited the attention of Vini Reilly through the band linking up with Sugar House production, leading to a subsequent collaboration seeing Old House Playground and Durutti Column together for the latter’s first Manchester performance for five years and Lazos singing onstage alongside Reilly that night. With bassist Jago Furnas enlisted last September, Old House Playground now release the magnificent tempting of The Great Escape, an encounter to inspire the imagination and feed a greedy appetite for dark treats.

Opener Polite Fiction immediately has ears and attention sparked with its initial psychobilly coated groove, and gripped with the quickly joining blend of vocals and spicy guitar enterprise. The tones of Lazos are a rich enticing and attention grabber, even as the song becomes a perpetual awakening of new sounds and textures sparking ears with embraces of fiery sax and brooding basslines amongst many things. An unbridled captivation with a predatory stride, the song blossoms into a sultry, jazz kissed seduction of Bernaccia and Tom Waits like essences courting the warped swagger of Eighties B-Line Train Disaster and the raw croon of Nick Cave. It is a delicious web of temptation, ears and thoughts embroiled in the swinging lures and smouldering drama cast by the openly inventive and descriptive craft of the band.

The exhilarating start is followed by Stardance, a similarly potent slavery of blues intoxication and rhythmic devilry bound in tangy grooves and vocal enterprise. Like its predecessor, the song has a flirtatious devilry to its sauntering gait and swinging energy, and like the first track provides an irresistible tapestry of darkly cultured hues entangled in delta bred blues persuasion. It is the devil’s music for sure and even more ridiculously addictive when exploring off kilter twists of sonic and melodic ingenuity aligned to the perpetual noir lit jazziness fuelling its inventive breath.

A western twang creeps in with the inviting caress of guitar bringing All Day Today into view next, the song’s country-esque acoustic folk charm enhanced further by the ever potent and alluring vocals of Lazos. Reminding in some ways of Swedish band Billy Momo and in others of Milton Star, the song is three minutes of dark seduction sparking ears and thoughts further before making way for the EP’s closing title track. Sweltering with sultry melodies and heated sonic mystique, the song is pure aural alchemy conjuring a majestic tapestry of wiry chords and acidic grooves within a suggestive landscape as intimate as it is evocatively expansive.

The track is a brilliant end to a seriously thrilling release. Old House Playground may have been in the shadows for many before the release of The Great Escape EP but it is easy to suggest the only dark hues around them will be those they seed, blossom, and embrace their music with from hereon in.

The Great Escape EP is available via Horus Music from 22th June @ http://oldhouseplayground.bandcamp.com/album/the-great-escape, digitally and as Limited Edition 10″ vinyl with 2 bonus tracks!