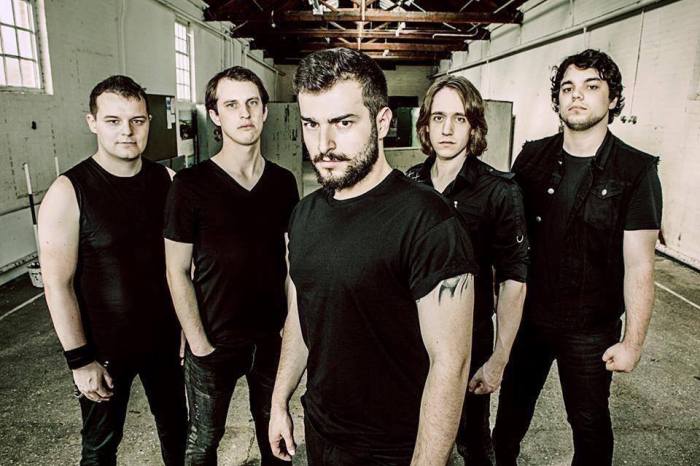 UK metallers Dendera whipped up plenty of eager attention and acclaim with their debut album The Killing Floor two years ago and now with its successor Pillars Of Creation poised to ignite ears and appetites with its own unique character, it is easy to expect the Portsmouth band doing the same again with greater success. Embracing a fresh roar of modern rock and invention with their heavy/classic metal breeding in their new offering, Dendera has honed a more distinct sound to themselves, not one to reinvent genres but undoubtedly one to really set the band apart from the tide of likeminded bands.

Since releasing their first encounter, the We Must Fight EP in 2011, it is fair to say the band has had the attention of fans and media alike, a ready to praise spotlight elevated by the release of The Killing Floor in 2013. Live too the band has earned a potent reputation and stature, touring and sharing stages with the likes of Saxon, UFO, Fozzy, Skindred, Firewind, Alestorm, Unearth, The Sword, Orange Goblin, Grand Magus, Ill Nino, POD, Soulfly, Kobra and the Lotus and….well the list goes on. Now the quintet of vocalist Ashley Edison, guitarists Stephen Main and Tony Fuller (the latter having left the band after the album’s recording to be replaced by David Stanton), bassist Bradley Edison, and drummer Andy Finch return with a seriously mighty slab of metal and with ease the band’s finest moment yet. 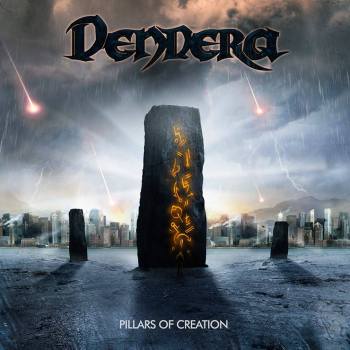 Pillars Of Creation opens with Claim Our Throne and quickly has intrigue and imagination awake with the track’s opening melodic suggestiveness. Its entrance sets the scene, casting a rich and welcoming landscape yet one with an initial melancholic air which as its depths and scenery builds and expands, evolves into a more intimidating presence. Eventually riffs and rhythms build imposing walls whilst hooks and grooves colour the increasingly compelling emergence of the track with inescapable temptation. In full stride the song roars with the impressive vocals of Edison leading the way as guitars and bass lay down magnetic bait through riffs and enterprise. The old school essences of bands like Iron Maiden and Saxon, which heavily coloured the band’s first album, are still clear hues in song and album but more spices now in a bolder and more creatively individual proposal from Dendera. It is not ground-breaking stuff as mentioned but the band has cultured something rich in variety and resourceful in exploration, and as shown by the starter and reinforced by subsequent songs, created a sound which will send fans into bliss whilst offering plenty for those who maybe do not have an appetite for a classic form of metal to have eager interest in.

The impressive start is matched by Bloodlust, the song straight away living up to its name and exploding with a far more raw and predatory presence than that of the previous song. Thrash spiced riffs are rampaging through ears from its first breath, they and rhythms whipped up by the confrontational vocals. It is a tenacious and grouchy encounter which mellows out for its melodically fiery chorus, but is soon back stirring up air and blood with the same insatiable surges of intensity and sound which it first erupted with. Its blend of contrasts is a fluid and alluring invitation, a persuasion emulated again in the stormy nature of In High Tide. A cantankerous tempest of rock ‘n’ roll, the track aligns sonic croons with bestial snarls and rugged hostility, their fluid passage making for a fascinating and increasingly anthemic incitement on ears and emotions.

Already across three songs, Dendera has infused elements from groove and melodic thrash to varied heavy rock, an involvement never diminishing just evolving and changing across every song starting with the stalking of senses that is Disillusioned. Another song reeking attitude and carrying an almost primal swagger, it prowls ears with an intimidating air driven by the ever impressive and masterful rhythmic webs of Finch. Groove wise there is a definite Pantera edge and swing to the track’s core lure, one in many ways copied in the excellent vocal persuasion of Edison and potently backed by the band’s roars and the guitar endeavours of Main and Fuller, especially with a seriously tasty and incendiary solo.

The Daylight Ending is a sweat and spit encounter, rhythms and the delicious bass bait of Bradley Edison a barbarous proposal matched by riffs whilst guitars and vocals carry an aggressive

nature to their provocative and inventive craft. The song is a gallop for the main, a relentless foraging of body and imagination leaving an even hungrier appetite which The Chosen One feeds with its dark and heavy trespass of the senses. The song does not quite grip as other tracks, missing an indefinable spark to ignite personal tastes but there is no denying or not enjoying its invention and adventure, especially it’s contagious and at times brutal gait.

The explosive sonic flames and melodic passion fuelling Unholy sparks a lick of lips within a few explosive moments next, riffs and grooves almost swarming over the senses and into the passions as bass and vocals virtually prowl with their own inescapable persuasion. The beats of Finch are a bully but a welcome protagonist as again he sculpts an addictive frame and engine room for a song.

Pillars Of Creation is brought to a close by Edge Of Tomorrow, a fire of aggression and passion within a sonically tempestuous soundscape. It fiercely pleases on first touch but, as the album, just impresses and draws keener lustful reactions with every listen. The release is a must for all classic and heavy metal fans but such the new adventure and variety the band has woven into their songwriting and sound, there is much for all metallers including, us among them, those without an instinctive taste for old school roars. In fact it very likely will, as here, emerge as a favourite of the year for fans and newcomers alike.

Pillars Of Creation is available via Metalbox Recordings from June 22nd @ http://www.denderauk.bigcartel.com/