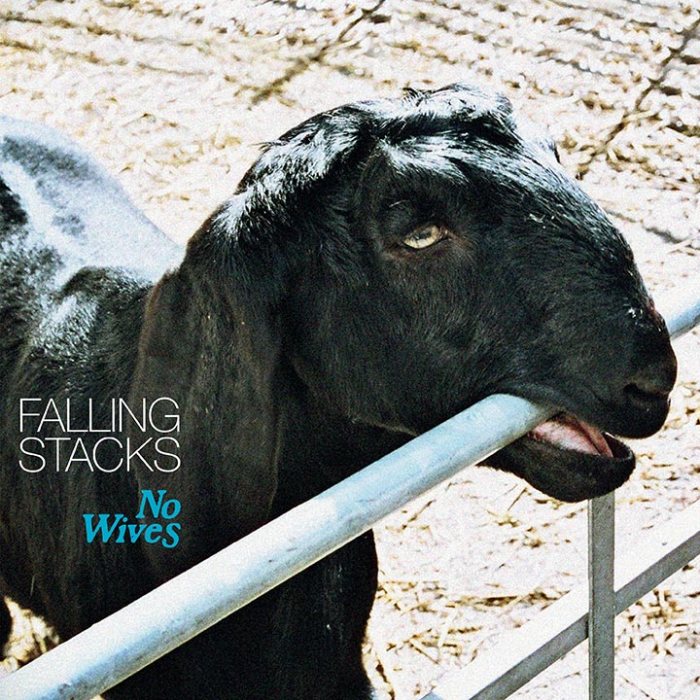 No Wives is one of those album’s you can imagine being described as anything from a glorious disorderly revelry to a cacophonous irritant, but for those with an appetite for psychotic rhythms, abrasing discord, and virulent noise it is easy to suggest that the Falling Stacks’ debut album is going to be one of the highlights of the sonic year. Like a highly agitated union between early Wire and eighties post punks The Diagram Brothers infused with healthy, or maybe unhealthy, essences of bands like The Fall and Fugazi, sound and album provide a raw and lingering magnetism. For sure No Wives is a proposition some may hate but be impossible to ignore but for those with experimentation in their genes, it is a mouth-watering dissonance to get fully involved in.

The UK trio formed in 2011, emerging in Bristol with an appetite for the likes of Sonic Youth, Fugazi, Pavement, and The Wedding Present. Falling Stacks’ music suggests there are many other likes and influences involved in the band’s own invention, whether intentionally or not, and it all makes for web like songs which catch ears and attention with a babel of sound and imagination. As the band soon revealed in a trio of EPs after their first steps, all sonic squalls and rhythmic trespasses, along with vocal incursions, come veined by an understated but potent order. In previous and enjoyable encounters it was swamped by the free hand given to riots of sound but with No Wives, the band has seized such structures and worked outwards resulting in their finest provocation yet.

The album opens with the quickly spicy and rowdy Pool Party, a sonic welcome the lead into a volatile shuffle of jabbing beats and throaty basslines courted by bracing vocals amidst a tangy guitar clamour. Once hitting its full and irregular stride, a contagion soaks ears and attention, the lure of disorder subsequently providing two minutes plus of inescapable virulence. It is a riveting start continued by the just as eagerly inventive sonic chatter of Dust Motes. Hooks and rhythms barely stand still long enough to cast a shadow within the song, the guitars dancing with almost autistic tendencies over rolling beats and a bassline which moves from moody to carnivorous and back again on a whim. The vocals across the release are a more straight forward proposition yet they too lyrically and in delivery are mischievously unpredictable and a thick hook here especially.

Sections And Sub-Sections restrains some of that turbulent energy next, an opening saunter of bass resonance posing as a riff and caustically delivered vocals the spark to similarly reserved but jabbing rhythms within guitar varied jangles. Overall the song does lack the spark of its predecessors but there are moments in its imagination which are almost sinful in their rousing invention and inimitable tempting.

Both No Stops and Los Ticos get ears and emotions over excited, the first with its persistently evolving landscape of time disruptions and seductive discord, Swell Maps coming to mind at times, whilst the second is a prowl with a devilish glint in its eye. It strolls with a deliciously compelling bassline and a mesh of guitar intrigue around gripping rhythmic bait which as every element, has a distrustful feel to its roll. The song is made up of confrontations sharing a tantalising collusion and fair to say the song is probably the only schism that is in truth the perfect union of discontent.

A darker more predacious place is explored on A Fly Would Slide, the track a hug of sonic tension and imposing ambience but coloured with further clashes of melodic and vocal discordance. Its intensity ebbs and flows as energies and emotions revolve with restraint and roars, but whilst the track takes longer to trip the switches than those before it, full persuasion is inevitable over time.

Seven Cuts is a far quicker success on ears and emotions, its caustic tapestry of snarling bass, punchy beats, and kaleidoscope of guitar endeavour, a swift fondling and thrilling of the imagination before its successor Silverware uncages a similar but individual psyche twisting dance on the senses. Rhythms and hooks have as many grasping teeth as a zip as the song shows itself to be a temptation of invigorating disunity aligning in one jungle of infectiously deranged harmony before taking its leave. It is replaced by the tinny beat loaded opening of Double Scull. Magnetism does not do the track’s start justice or the subsequent slim lead into the inevitable busily disharmonic heart of what is another slow but fiercely successful persuasion.

Closing with the physically and emotionally turbulent New Dog, the song like the shadow to the previous track in many ways, No Wives is an enthralling and exciting incitement for ears and thoughts. At times it does not go far enough with its adventure and clangor of sound, an exploration for the future, and some songs just miss the final ingredient of those providing the major peaks of the release, but Falling Stacks has given noise and rock one thoroughly fulfilling stirring.

No Wives is available from June 8th via Battle Worldwide Recordings through http://battleworldwiderecordings.com/battle/album/battle023/