Tension & Resolution is the devilish encounter introducing UK alternative rockers Masamune to their broadest audience yet, five tracks which just get under the skin in an attention grabbing debut on first hearing to become even more dramatically compelling over time. The release also shows there is still plenty of scope for the band to evolve and build even more virulent persuasions, and that alone just breeds healthy anticipation.

Hailing from Sunderland, Masamune began in the autumn of 2009 when guitarist Steven Kane, bassist James Wallace, and drummer Jack Johnson came together musically for the first time. Crossing each other’s path via the internet, the band’s founders were soon creating their own songs and performing across the North East of England before in 2012, the trio decided to push things to another level and recruited vocalist Neil Anthony in the year’s closing weeks to complete the line-up. The years have seen the band play alongside the likes of Fearless Vampire Killers, Fort Hope, and Ashestoangels as well as taking part in a Channel 4 television show with comedian Al Murray as their roadie. Musically they have drawn references to the likes of Muse, Red Hot Chili Peppers, and Queens of The Stone Age, all understandable suggestions especially the first of the three, but as the EP’s first song shows there is much more fresh body and flavouring to the Masamune sound. 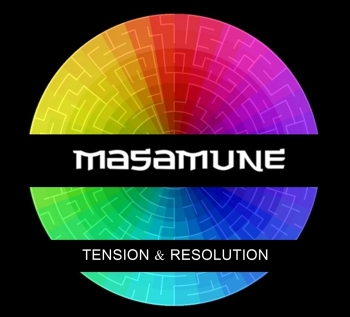 Tension & Resolution opens with The Bloodlines and a tangy guitar melody. Its lure is soon backed by a rolling persuasion of drums and in turn an instantly captivating bass groove amidst richer guitar enterprise. Things relax for the entrance of Anthony, his expressive tones courted by a dark bassline and crispy beats whilst a flirtatious almost smiling tease of guitar contrasts the darker emotion of the moment. It is a beguiling passage slowly increasing in drama and intensity and eventually erupting in a feistier blaze of riffs aligned to potent harmonies from Anthony and Wallace. More tantalising temptations, like hooks and grooves from across the band, continue to play with the imagination and feed a growing appetite as the song provides a strong start to the release.

The following Silhouettes opens with just as rich bait as its predecessor began with; a single seduction of guitar cast in a familiar yet indefinable suggestiveness the lead into an increasingly busy and fuzzy web of enterprise. That Muse essence is an open breeze across the song, colouring nicely the original and flowing ideation of Masamune. It is another offering which ebbs and flows in energy, though it provides a livelier and more infectious bounty for ears and thoughts to eagerly embrace. The catchy beats of Johnson are deceptively anthemic and matched by the alluring bass coaxing sculpted by Wallace whilst around both, the guitar of Kane and the increasingly impressing vocals of Anthony sparkle and entice.

Run & Hide saunters in next on a thick bassline and a welcoming shuffle of beats before opening up into a harmony loaded stroll of melodic rock with evocative expression around an infectious swing. Steely bursts of riffs add to the captivation, as do the spidery strands of guitar endeavour, it all aligning for another gripping and enjoyable persuasion before making way for the melancholic charm of The Song About Ghosts. Though it carries imposing shadows in its body there is also plenty of radiance through melodies and harmonies, an inventive rhythmic tempting, and in the chorus a Brit pop hue to twist things up. The track maybe does not quite match up to the last couple of songs yet it too is an unpredictable and resourcefully engaging encounter which persistently draws ears back.

The EP is concluded by House Of Mirrors, a highly enjoyable finish with its snarling riffs and magnetic sonic tenacity. Once again rich inescapable hooks snare ears and the imagination whilst the ever enslaving basslines of Wallace add their addictive qualities to the mix. The song is enthralling and an invigorating close to a fine first encounter with Masamune.

Though some songs within Tension & Resolution just fall short of finding the spark to elevate them to even higher stature, the band seemingly holding back at times rather than taking a step into the creative ‘unknown’, there is no denying that the EP is one seriously satisfying debut and that the future of Masamune is looking very exciting.

The Tension & Resolution EP is available now through all stores and via http://masamune.bigcartel.com/product/masamune-tension-resolution-ep