Home › Music › Album › Abrahma – Reflections In The Bowels Of A Bird

Abrahma – Reflections In The Bowels Of A Bird 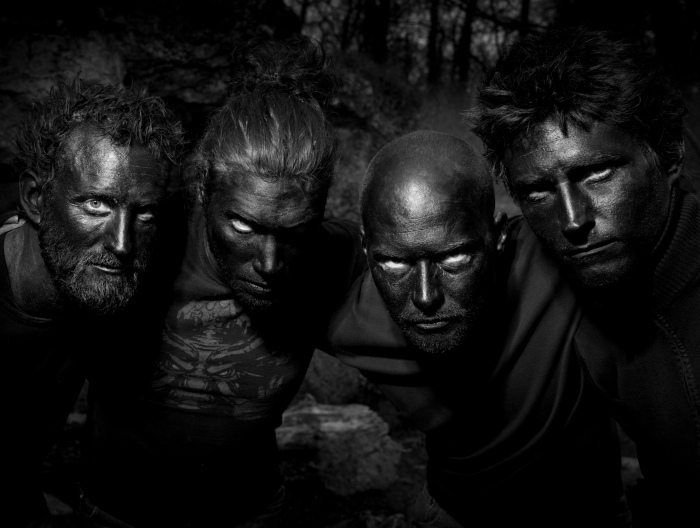 It is not a rare event to immerse in a release of expansive and spellbinding imagination, to be taken out of the real world into a creative adventure for an hour or so. It is less often though that you get simply lost within a proposition of such complex and unrelenting ideation that you feel trapped, caught in a claustrophobic tsunami of creative consumption where only the brief gaps between songs offers a hint of escape. Not that you will want to break free from the fascinating and suffocating glory of Reflections In The Bowels Of A Bird, the new album from French rockers Abrahma. It is an irresistible and exhausting emprise of perpetually evolving sound and dramatic atmospheres, an experience as sombre as it is bewitching and as creatively ravenous as it is emotionally disorientating.

There is no real surprise that the album is so intensively and imaginatively imposing, its predecessor Through the Dusty Paths of Our Lives when released in 2012, a similar maelstrom of sound and invention, as described elsewhere as a “heavy odyssey peppered with Hindu mysticism and voodoo convolutions”. The new album has taken that canvas to new and even more expansive and hypnotic realms; every track an individual journey uniting for one colossal and wonderfully unpredictable landscape of senses examining, thought provoking heavy rock.

Released as its predecessor via North American label Small Stone Records, Reflections In The Bowels Of A Bird makes a low-key entrance as Fountains Of Vengeance comes into view on a wave of sonic noise and intrigue, eventually stepping from its presence with thick beats and equally tense riffs and grooves. A grungy air also lines their invitation as the sombrely delivered tones of vocalist Sebastien Bismuth bring a colder subdued presence to the already mesmeric encounter. His and the guitar of Nicolas Heller increasingly entangle and merge to cast a raw and magnetic web of sound, hooks potent and melodies fiery as the song creates a tapestry of Stone Temple Pilots like tempting with invasive post rock ambiences and psyche bred exploration. The song roars and seductively sways across its ever twisting adventure, keys from again Bismuth inventively caressing the darker prowling hues of bass and the predatory beats cast by Benjamin Colin.

The following An Offspring To The Wolves is immediately a darker imposing character, the bass of Guillaume Colin resonating with menace and toxic enticement as a doomy air colludes with stoner-esque sonic expression. There is an underlying swing to the lumbering infection surrounding the captivating and varied vocal delivery of Bismuth, part of a slow smothering of the senses sparking with flames of sound and emotion across the consuming prowl of the senses. As all tracks upon the album, it is impossible to fully explain all of the textures, emotions, and dark almost meditative radiance oozing from the cauldron of sound and invention at work, but easy to say it is thoroughly absorbing.

Omens Pt. 1 comes next, its sultry climate and sweltering melodic intrigue lying somewhere between psychedelic and occult rock, its exotic lure almost shamanic on ears and thoughts. That of course is only part of the picture, rhythms at times a rapacious confrontation whilst melodies and vocals spill an evocative croon within the explosive causticity embracing ears. It is bewildering and fascinating simultaneously, needing as all tracks plenty of partaking of its proposal to come close to exploring its world. The same of course applies to equally dramatic and engrossing Weary Statues, the track a tapestry of carnivorous intensity, volatile textures, and emotion fuelled drama. It is all, with much more, woven into another transfixing and physically stifling tempest sculpted with creative ingenuity, bold unpredictability, and mouth-watering craft.

Next is the spellbinding Omens Pt. 2, a peaceful reflection of surf rock seeded beauty shimmering with melodic elegance and a haunted breath which becomes more unsettled and agitated with every passing tangy caress and melancholic sigh, Another switching of calm and ruffled intensity eventually leads to a bedlamic finale set ablaze by the slightly psychotic flames of sax from album guest Vincent Dupuy. It is inescapable bait, enslaving attention and emotions before making way for the mystical, tempestuous flight of Kapal Kriya, the track another brooding mix of varied heavy rock sounds in one diversely layered, intimately spatial adventure.

The raging diversity and expectations ruining enterprise continues to thrill through firstly the ferocious rock ‘n’ roll stomp of Square The Circle, its charge on ears as probably assumed by now, never dawdling in one style, torrent of sound, or urgency of delivery for long. Its outstanding incitement is followed by the emotional and increasingly physical turbulence of the excellent Omens Pt. 3 which then moves aside for the equally enthralling A Shepherd’s Grief, which features guitar solos from Monster Magnet guitarist Ed Mundell. It is a squalling seduction, employing vast arrays of challenging spices and emotions in its expansive soundscape, and yes it is creatively sorcerous.

The album closes with the mournful beauty and blistering fire of Conium, a devouring sonic embrace bringing a thrilling release to a dramatic conclusion. The Abrahma /Thomas Bellier produced Reflections in the Bowels of a Bird is a virulent listen which can be as uncomfortable as it is pure seduction, but with constant attention grows from an impressive encounter into something very special.

Reflections In The Bowels Of A Bird is available on CD and digitally via Small Stone Records @ https://smallstone.bandcamp.com/album/reflections-in-the-bowels-of-a-bird