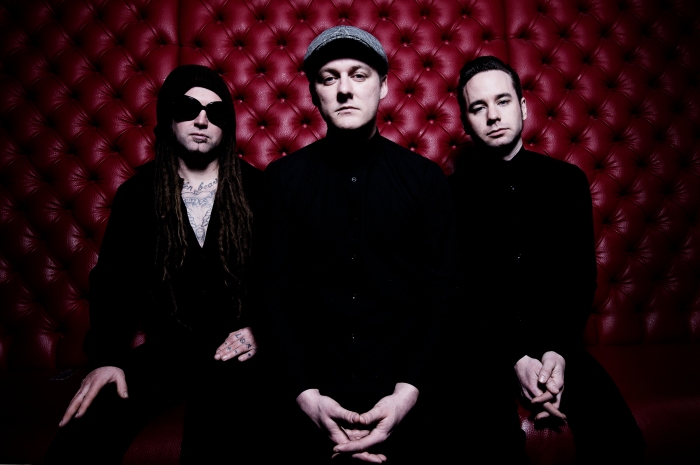 There has always been a fire in the belly of the Graveyard Johnnys’ sound, as well as a constant entwining of varied strands of rock ‘n’ roll, but the band has tapped into their richest vein of belligerent contagion yet for new album Dead Transmission. The release is a glorious incitement of punk and rockabilly, though as ever the Welsh band infuses plenty of additional rock bred spices in provocations impossible to pin down but very easy to greedily devour. If you had to make a comparison it would have to be The Living End, though Graveyard Johnnys, as evidenced by their new offering, create something a little dirtier and more unpredictable.

Formed in 2008, the Chepstow hailing Graveyard Johnnys has earned a massive reputation for their fiery and frantic live performances, an aspect also echoed as close as it is possible to ever achieve in the studio within Dead Transmission. It is fair to say though that starting with their debut EP Streetblocks and City Lights, the band’s releases have persistently been a voracious slab of energy, as epitomised by first album Songs From Better Days in 2011. These only emulated as mentioned a live presence which has stirred up audiences Europe wide over the years, persistently luring new and loyal appetites to their sound. Graveyard Johnnys has shared stages with the likes of Turbonegro and Hayseed Dixie, toured with bands such as Mad Sin, The Peacocks, and Nekromantix, and left crowds exhausted with their own headlining shows, all earning greater acclaim and increasing a potent reputation. Now the threesome of vocalist/upright bassist Joe Grogan, drummer Thomas E Lord, and guitarist Callum Houston, arguably the first really stable line-up within the band and its most potent, are poised to open a new storm of attention with Dead Transmission, a release which will not take no for an answer.

Album opener is The Poison, a song entering on the regimented stomp of marching feet, equally eager beats, and subsequently a rich lure of flavoursome enticement which is as much melodic rock as it is classic rock ‘n’ roll seeded. Settling into a landscape of catchy energy and invention, a blues air lays over melodies and dust coated vocals whilst hard rock revelry creeps into the hook lined swing of the encounter. Straight away the band has expectations perfectly defeated, the song bounding through ears like a mix of Turbonegro, The Hives, and The Black Keys yet not. It is a tasty appetiser for things to come, but quickly outshone by the following For Tonight, and indeed the rest of the increasingly virulent album.

The second track spills a delicious hook straight away, one swiftly joined by the excellent voice of Grogan and a potent rapping of drum skin by Lord. The singer’s bass is also quickly stirring up ears and appetite, its pungent bait a dark temptation within the swinging enterprise of Houston’s fingers and strings. A great mix of restrained and keenly strolling energy, it has an essence of The Peacocks to it though again it is easy to suggest other styles and artists as references to something quite distinct to Graveyard Johnnys.

The album’s title track is next, static caressing ears before majestic and instantly rousing rhythms and riffs ignite body and imagination. Scythes of guitar and an open spillage of attitude soon join the punk bred incitement too, its snare drum rim clicking and thumping beats irresistible and matched in slavery by the constant adventure of inescapable hooks and brawling energy. Again the band keeps things too lively for expectations, its passage another mix of feverish fury and predatory reserve, and simply sensational.

One major highlight passes the passions over to another in the feisty shape of Because Of You, an old school rockabilly stomp with modern tenacity and attitude. It is the kind of song that if Gene Vincent was stomping around in his young leathers now he would be unleashing. It is one minute and a half of pure and spicy rock ‘n’ roll; a description applying to the punk seeded One Day Or Forever and its individual march upon ears and emotions just as easily. Its rhythmic stroll has feet shifting and head bobbing whilst its alluring Bad Religion meets Flogging Molly like melodies and tempting has ears gripped.

A similar punk fired persuasion colours the next up Ready To Roll, riffs and rhythms instantaneous seduction reinforced by a tenacious enterprise of guitar which at times flirts with a seventies spicing a la Mud/Showaddywaddy, though blink and you miss it as like so many, the song is a busy cauldron of flavours and temptation which has attention solely in its grasp, much like the following pair of I Won’t Wait and Compromise. The first of the two merges raw punk and vintage rock ‘n’ roll resourcefulness for its decades fusing, passions firing riot. It snarls relentlessly, and expels a dirt encrusted breath of predation, but with the throbbing string slaps of Grogan, the hypnotic bait of Lord, and the ear entangling prowess of Houston, the song was never going to be anything other than an epidemic of infectiousness. Its successor swaggers in with its own appetite binding lures as well as the potently confrontational lyrical craft which flows across the whole release as impressively as the sounds. The Living End is an unavoidable comparison to the outstanding song but again the British three create something as unique from as it is similar to any references.

Fair to say by the end of the song the body is weak from the energy given to the insatiable romps within Dead Transmission, and seemingly sensing this Graveyard Johnnys offer Mothers next, a calm acoustic rock ballad with a country rock breath. It is an engaging and increasingly magnetic croon but admittedly before its increasingly lively end, feet and appetite greedily wanted to let loose again which they do with the closing Little Witch. A smog of sonic aggravation and rhythmic intimidation, the punk/ hard rock explosion is the perfect book end to the start of the album, a fiery and tempestuous maelstrom of fiercely flavoured rock ‘n’ roll with a flirtation of melodies and keys to keep things even more fascinating.

It is a blistering end to a thrilling proposition, Graveyard Johnnys at a new peak with songs which tap into every instinctive want of any rock ‘n’ roll fan, a broad genre which just does not get much better than this.