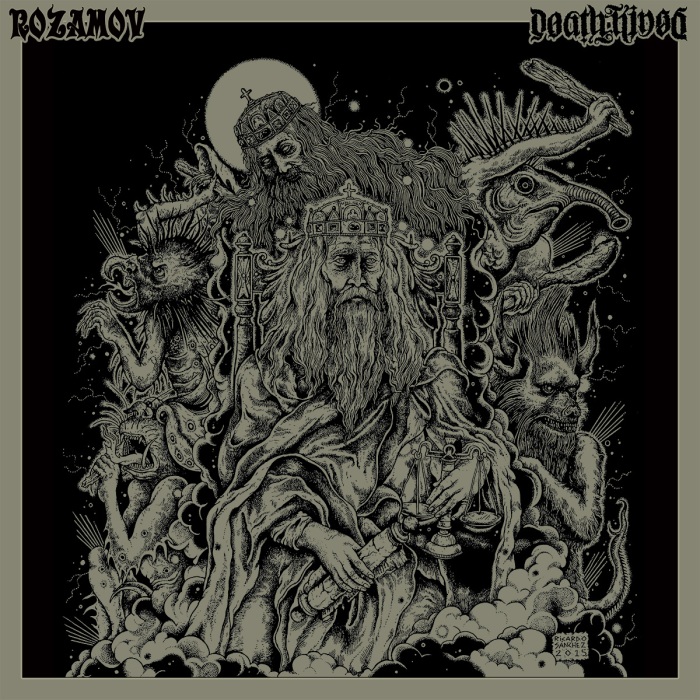 On May 16th and 17th US bands Rozamov and Deathkings respectively will be playing The Observatory in Santa Ana as part of the three day Psycho California fest which starts on the 15th. The third year of the event will again see over fifty bands from around the world bringing a wealth of genres from doom and sludge to post rock, hardcore to black metal. To mark their participation Deathkings and Rozamov have united to unleash a split 7” via Midnite Collective, bearing a new and exclusive track from each. It adds up to around fifteen minutes of sludge bred enjoyment with the imaginative contagion to seduce and primal ferocity to savage.

The first track is from LA hailing Deathkings, a quartet fusing sludge and doom with experimental voracity. The band consists of guitarist Daryl Hernandez and bassist/vocalist Nicolas Rocha, a pair who had already played together in a previous band before forming Deathkings, as well as drummer Sean Spindler and guitarist Mark Lüntzel, who joined the band after the release of the band’s three-track EP Destroyer. The quartet is currently getting to grips with the creation of their second release, tentatively titled All That Is Beautiful, and with their contribution to this endeavour in the mighty shape of Solomon, it is destined to be a highly anticipate encounter.

Solomon opens on a hypnotic and instantly enthralling stroll of resonating, deeply impacting rhythms skirted by equally predatory strands of guitar and one delicious bass tone. It is a gripping anthemic baiting over which the gruff growling of Rocha grumbles and roars. A fresh gear is then subsequently found, the track prowling with greater relish and urgency whilst dispensing thick and incendiary sludgy enterprise on the way to becoming an evolving cauldron of sinister monotone vocals, melodic toxicity, and doom soaked intensity. It proceeds to haunt the psyche and voraciously devour the senses, never remaining in one strain of confrontation for long but continuously igniting the imagination with its darkly immersive landscape. The track is inescapably compelling, an unrelenting mouth-watering incitement quickly matched by its companion on the release.

Rozamov springs from Boston and infuse their sludge invention with a more hardcore bred ferociousness as well as, like Deathkings, potent atmospheric persuasions. The trio of

guitarist/vocalist Matthew Iocavelli, bassist/vocalist Tom Cornio, and drummer William Hendrix, have frequently drawn references to the likes of Neurosis, Yob and Grief through their sound, live presence, and a pair of previous EP’s. Now in the depths of writing their first album, the Massachusetts band offer Ghost Divine to the split’s fury of sound, and from a sonic mist swiftly turns into a maelstrom like intensive examination of the senses fuelled by a bracing turbulence. Vocals quickly vent with a hardcore fury, a raging emulated by the caustic tempest of sound consuming ears simultaneously. At times an unbridled hurricane and in others a lumbering beast of doom lined discontent straddled by acidic flames of guitar rapacity, the track is a bewitching and fearsome rancor but unafraid to reveal unpredictable and engrossing flights of imagination, even if in brief and fleeting moments within its ravenous assault.

Both tracks leaves senses bruised, ears hungrier, and anticipation for their next releases sparked, as well as wishing we were there at both their upcoming performances.