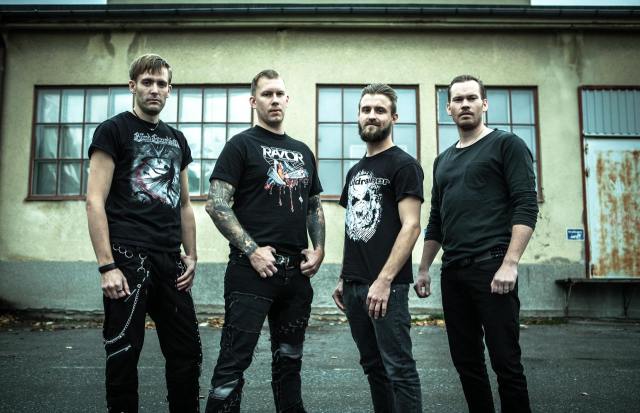 Preludes & Nocturnes is an album which manages to impress, excite, and disappoint in one go, though admittedly the latter is a mere fraction of the enjoyment had from the Carnal Agony release. There are just times though where it feels like it missed the opportunity to make an even greater impact on ears and subsequently the metal scene, evaded the chance to pungently push this highly accomplished band towards the brighter spotlights which admittedly it still might awaken.

Hailing from Umeå in Sweden, Carnal Agony began in 2011 and swiftly began luring attention for their diversely flavoured style of metal around lyrical themes inspired by the classic literature from the likes of HP Lovecraft, John Milton, and Edgar Allan Poe. Musically the band, on the evidence of their latest album, weaves in everything from heavy and classic to power and melodic metal to a thrash seeded sound, revealing inspirations from artists such as Iron Maiden, earlier Metallica, In Flames, Mercyful Fate, and Testament along the way. Early demos sparked interest whilst the band’s live presence has brought them attention and acclaim, especially through a tour with Six Feet Under last year. Carnal Agony has been called the latest sensation in the Scandinavian metal scene, a big claim not majorly contradicted by their debut album.

Produced by Ronny Milianowicz (ex-Sinergy, Dionysus, and Saint Deamon) and featuring former Helloween/Masterplan drummer Uli Kusch (also Gamma Ray, Holy Moses), the album gets off to a rousing start through War Prayer. Straight away heavy duty riffs and matching rhythms stand toe to toe with ears, setting down a sturdy thrash bred stride. Unpredictability shows itself to be a ripe essence within Preludes & Nocturnes and within just a few moments the first song has expectations wrong footed by slipping into a calmer melodic passage. This enticing invention is quickly surrounded by brewing essences of epic metal and stronger drama clad textures which in turn lead into another muscular onslaught. The gruff raw vocals of David Johagen join the mix now, his rugged, raw tones admittedly taking a little time to acclimatise to against the flowing tide of sound but an increasingly strong ingredient through subsequent listens of the release. Folkish elements tease alongside classic and power metal elements, already the band’s sound defying any precise tagging. The song continues to stampede and potently relax across its engaging length, a tasty appetite raising start to the encounter provided.

The opening vocal lure of next up The Frozen Throne is excellent, mass clean vocals like a band of brothers crooning air and ears and an element not used enough as the voices are spot on. A guttural roar from Johagen brings the air born invitation down to earth, his warlike call the spark for a web of sonic enterprise from guitarists Mathias Wallin and Pär-Olof Persson, buffeted by the thumping skills of Kusch. Hooks and melodies colour the chest thumping proposition too as again a clutch of different flavours align impressively in the track which by its end you will surely be raising a fist and vocal chords with.

Rebel’s Lament is a less forceful proposition next, though still a muscular persuasion. Inventive endeavour from the guitars bound the rally of beats and riffs whilst the dark tones of bass from Roger Andersson add rich shadows which nicely temper the skilled craft flaming from the fingers of Wallin and Persson, especially in a bewitching solo. The track though does not match up to its predecessors but still has ears engrossed and satisfaction bubbling as does the next up Rebellion. A power ballad of sorts, Johagen reveals more of his slightly cleaner and stronger qualities, and if I am being honest it is when he lets those free that he and songs find a new quality. To be fair, it is personal taste more than anything but nudged by the fact that when he does ‘sing’ he often ignites already gripping songs further. The track grows in weight, intensity, and anthemic energy so that by its close you feel like you are astride a stallion going into battle.

As good as those two songs are Carnal Agony overshadows immediately after. It is a beast of a song, a stalking intimidation of stabbing riffs and scarring beats from its first breath and a carnivorous charge of sound and energy from there on. But that is only part of the confrontation, the guitars sparking within the core rampage with slithers and spears of sonic imagination and melodic toxicity, it all ridden by the commanding ‘follow me into battle’ tones of Johagen. The track is outstanding but too damn short at barely over two minutes.

Next up is the heavy/classic metal spiced Night of the Werewolf, a track with gothic overtones. This is one of those moments where personally an opportunity was lost, the earlier mentioned clean vocals feeling like they would have been a better fit whilst musically apart from a fiercely enticing bassline, the band feels like they kept a check on the imagination which had already lit up earlier songs.

Fire Walk with Me has ears and emotions feeling feisty again next, its fluid travel through a landscape of stormy energy and reflective melodies fascinating whilst once more guitars and bass reveals striking exploits bursting with magnetism and individual skill. Backed by voice and drum swipes, the track leaves a breathless listener in its wake, ready for Sleep Waker to please with its spicy heavy metal enterprise and Crystal Lake to turn into a head nodding enthusiast with its contagious and sinister imagination. The first of the two is another which, like the album, is a blend of full captivation and less successful elements or choices, but does get stronger and more enthralling with every listen. Its successor is a glorious stomp of horror bred devilry, everything from hooks to grooves, riffs to rhythms, an emotion inflaming festival of aggression and temptation.

The opening grisly bassline of Secrets Within the Shrine next sets the tone and scene of the triumph to come. Its thick bait is swiftly joined and enhanced by prowling riffs and venom swing grooves whilst beats are more predatory than vicious at this point. There is no escaping a Metallica whiff to the song but equally a scent of Misfits and the grouchy air of Mastodon helps bring alluring flavour of the song, whilst the constantly evolving ingenuity of the guitars takes it all to another level.

The track is excellent leaving Together We’re Lost the task with closing up the album, which it does in potent style. Familiar yet fresh, the track is an infectious and highly enjoyable end and another song which finds Johagen running the range of his delivery and yes he needs to ‘sing’ more because that is where he excels.

Definitely Preludes & Nocturnes is a release to take time with because it just grows with every recruitment of its bold and flavoursome adventure. Bottom-line is that it is a strong and enjoyable introduction to Carnal Agony who carry the promise of even greater exploits ahead.