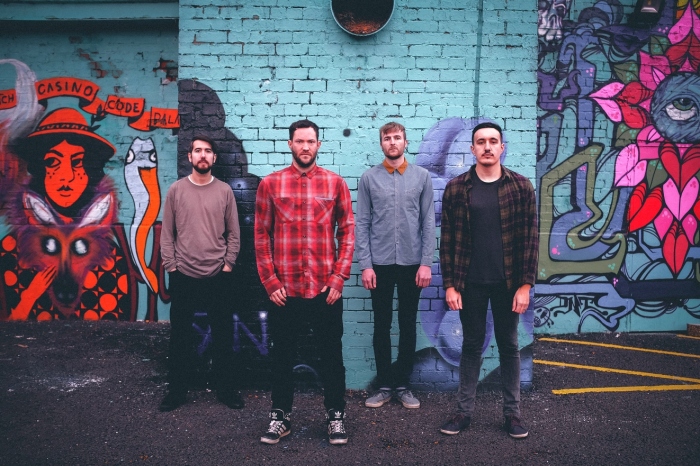 Coventry post-hardcore crew ‘Conduit’ are set to break with their ear-shattering debut album ‘Life On Repeat’, which is out through all stores on Monday 1st June.

Born in the West Midlands in 2009, Conduit are comprised of Dave Boyle working on bass & guitar, Ian Harris dishing out the riffs, Steve Hodge providing rhythm guitar and Dave Roberts hammering at the drums. Far from possessing the typical CVs you’d associate with many of today’s up-and-coming melodic hardcorers, two of the band members helped create a floor that appeared in a James Bond film, another volunteered for work in Bosnia and Herzegovina, and their lead singer used to spend his days working in a giant freezer. There is certainly something oft-kilter about Conduit, and it makes the ascending quartet even more intriguing.

The four-piece have a strong bond and friendship, and this solidarity seeps from their music. The Midlanders have a clear philosophy and have grafted diligently for the past seven years on shaping their sound and spreading their manifesto. With influences ranging from Underoath, Haste The Day and Rise Against, Conduit have fashioned a brand of post-hardcore that will batter its way through your skull, tug at your heartstrings, and genuinely make you think. The foursome maintain an earnest approach to song-writing united with meaningful lyrical content, rhythmic refrains, and thoughtful arrangements.

The band have also clocked up the mileage on the road and after a successful run of shows throughout the UK supporting everyone from War Of Ages, As Cities Burn, Listener, Continents, Heights, Oh Sleeper, Hacktivist, Through Solace, Max Raptor and Fathoms, to name a few, the foursome squirreled away, bracing themselves for a lengthy stint in the recording studio. They soon began work on their debut album, ‘Life On Repeat’, and emerged from the studio in 2015 with an absolute gem of a record.

‘Life On Repeat’ showcases the band at their best, casting a brilliant light on their shrewd ability to fuse and unify genres, despatching intoxicating songs that contort and wrap themselves around your ears. Opener ‘Eyes Wide Shut’ blows the roof off with its hi-octane vigour and full frontal assault, while ‘The Road’ displays the combo’s deft knack for delivering a contagious hook that will bed down with you for a spell. Their forthcoming single, ‘Others’, again highlights the quartet’s guile and astute use of dynamics to dramatic effect. Their previous single ‘Outstretched Arms’ further cements the unit’s unbridled quality as the track draws you in with its powerful hook and explosive rhythms, leaving you craving for more.