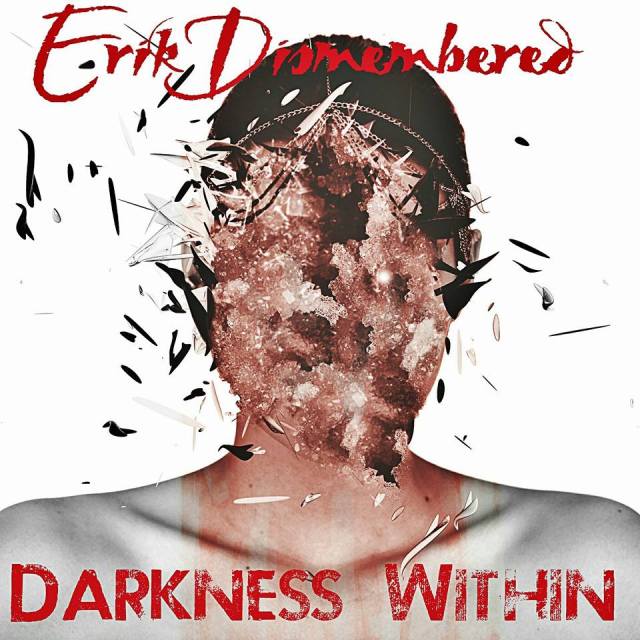 artwork made by Robert Mallinson,

As much as music should entertain and excite, it should also challenge. Whether it is physically or emotionally, the most thrilling and impacting encounters have been those which leave lingering imprints on thoughts and feelings whilst taking the listener to places they probably do not want to go. One such incitement is the Darkness Within EP from Erik Dismembered, an exploration of inner demons and external provocations breeding the merciless depths of its title. It is also a masterful weave of sound and imagination, a testing some will embrace, others fearfully flee, but all will be left locked in thought and self-awareness.

Erik Dismembered is the solo project of Arizona musician Erik Martin, better known to date as part of death metal duo Critical Dismemberment and the extreme-metal/industrial pairing of Skin Drone. His own project is a unique exploration compared to those bands though there is the same hunger to push and challenge not only the listener but his own creative limits. Erik Dismembered pulls on a vast array of flavours and textures, some familiar as in his other bands, but predominantly they are unexpected essences and styles woven one startling creative experiment.

Lyrically and emotionally each track within Darkness Within plays like stark slithers of insight into a bigger darker picture; themes such as addiction, love, hate, anxiety, and depression combining to create not exactly psychotic but certainly turbulent protagonist(s) explored by the release. How personal to Erik the premise and experiences within tracks are only he can tell but there is an intimacy which is shared by creator and recipient that hits hard, openly, and truthfully.

The EP opens with A Deal with the Devil, a track also featuring Critical Dismemberment band mate Chase Fincher. A guttural roar opens things up, swiftly accompanied by a gentle electro beckoning. The returning raw vocals keeps that initial edge and intimidation blazing as guitars add their sonic tempting to an increasingly tempestuous ambience. Industrial and metal essences entangle within the growing magnetic landscape whilst electronic flirtation bubbles vivaciously across their dark web. There is an agitation to it all also, the lighter and shadowed elements showing an emotional unease which especially coats the lyrical persuasion and erupts forcibly in the outstanding Anxiety.

A melodic electronic shimmer make the initial coaxing, it’s haunted breath the invitation to incessant beats and the whispered anxiousness of Martin to engage the imagination. Scything strokes of guitar aligned to heavier vocal tones erupt soon after, pungent beats adding more sinew to their potency before keys burst into a blaze of harsh electro/industrial tempting with a feel of God Destruction and Bestias De Asalto to it. As Martin shuffles thoughts and options in the lyrical incitement, the earlier dark calm returns before again it all build to an unstoppable emotional crescendo and raw physical expulsion. The feeling of entrapment within feelings and external/internal pressure is superbly exposed by the song, almost leaving the listener also struggling to breathe through solicitude in its wake.

Diamond Eyes floats in next, acoustic guitar accompanying a vocal caress to mesmerise ears before evocative strings and piano seduce with their orchestral elegance. The vocal romance has its own shadows; an undefined dark hue which lies enthrallingly within the poetic charm of the song, keeping thoughts intrigued and busy before the EP’s title track takes over and immediately lays down a colder, starker scenario. Black depths expel their fears in voice and sound, grasping at shards of piano spawned light, clinging to it with hope but swallowed by the festering shadows clawing at psyche and emotions. There is no escaping the power and intensity of words and tone, and again you wonder if only those with intimate experience can achieve this potency in their music.

Most tracks stop with abruptness, their space instantly taken over by its successor and where that feeling of songs being glimpses, parts of a larger almost unstable picture emerges. Darkness Within is an example its sudden end quickly the unrelated start of Desecration of a Corpse, itself a caustic roar of industrial and corrosive magnetism. Melodies float as sonic ferocity sizzles and tempestuous vocals spread raw angst across a discordant electronic shuffle. It is transfixing, a mesmeric and uncomfortable consumption of ears and thoughts in sound and words which only leaves a fierce appetite for more.

The EP closes with the haunting Weary Hearts, a tender emotional kiss on the senses which in some ways is the most disturbing song on the release such its immersive strength and ghostly reflections. It makes for a riveting end to an outstanding encounter, a release which takes on an exploration which is unafraid to bare its darkest corners and soiled emotions, but are you brave enough to join it is the question?

The Darkness Within EP is available now as a free download @ http://bluntfacerecords.com/erik-dismembered-music