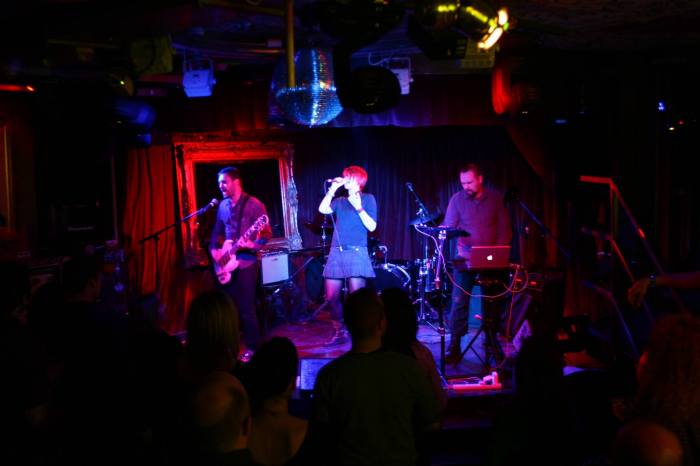 Bringing fresh aggressive incitement to the dance-floor along with the virulent contagion of sound they are renowned for, alternative-electro trio Plastique unveil new single Quake. It comes after a quiet period for the band, a time which saw them take time away to reassess their direction and next step. Vocalist Anelise Kunz spoke about that period and the new single recently, saying “After two albums we kind of wanted to add something new to our sound, but we started pressuring ourselves for new song ideas…and because of that nothing was really happening, the new single [‘Quake’] came out as a sign of hope…there was no pressure, the vocal jam just happened, and soon we were all involved in getting this one ready to go!”

It is fair to say if only with one song to assess it by so far, that it was a reflection and exploration spawning potent results. Kunz, guitarist Fabio Couto, and DJ/producer Gabriel Ralls have returned with a feistier and more voracious attitude in sound and intent. Coming together as Plastique, Brazilians Kunz and Fabio Couto with British bred Ralls quickly gripped keen attention with their self-titled debut album late 2011. It was a release backing up their growing stature on London’s alternative scene, a presence pushed and ignited further by its successor #SocialScar two years later. Now after that time away, the threesome are back with a more industrial rock fuelled incitement, one sure to spark frantic activity on the dance-floor again but this time with darker predatory inclinations.

From its first creative mechanism of sonic and rhythmic provocation, Quake displays a psyche challenging imagination and turbulence to it. Beats thump with resonating toxicity whilst guitars blaze with their own raw aggravation, yet there is that expected virulent catchiness and techno energy which sends addiction spawning urges through ears and body. The vocals of Kunz bring their own challenging posture to the song, her tones and delivery reminding a lot of Lesley Woods of eighties post punks Au Pairs, and indeed there are elements of that genre within the increasingly magnetic encounter. Equally essences of PJ Harvey and Cauldronated come to mind as the song continues to cantankerously ripple and contagiously seduce the senses.

If Quake is the sign of things to come, the wait since the last album was well worth the frustration for fans and band alike. It also suggests that Plastique’s next full-length will be their finest most intoxicating offering yet, something you can apply right now to their single.