All To Ruin – Among Us

Back in 2013, Welsh melodic metallers All To Ruin made their introduction with the Parables EP, a striking collection of songs whose only real issue was a sound which lay comfortably within that of the crowd. The suggestion and potential though was that the band would evolve into something much more distinct in time. Now the Port Talbot band return with its successor Among Us with the first question in anticipation of its release being had All To Ruin found that unique identity. Certainly in adventure, craft, and maturity, the band’s sound has openly leapt on, but in originality it is a bit of yes and no. A familiarity to bands such as Funeral For A Friend, Protest The Hero, and at times August Burns persists but it is now coloured with a freshness and creative tenacity which makes the band’s sound linger and take on a more individual character. All To Ruin is still searching for that real originality it is fair to say but as you get caught up in their powerful anthemic choruses and the fiery passion of vocals and sound, that moment in time belongs solely to them.

Formed in 2011 and with a demo under their belts by the end of that first year, All To Ruin swiftly lured attention from fans and media alike. It was Parables which lit an even stronger awareness and following, backed as potently by live performances which has taken the band to play over the past four years with the likes of The Gallows, Young Guns, Deaf Havana, This Is Hell, Lower Than Atlantis, The Blackout, Funeral For A Friend, Heart Of A Coward, Heights, Exit Ten, Textures, Continents, Sylosis, The Chariot, Revoker, The Casino Brawl…well the list goes on and on. Entering the studio, as with their last EP, with Martyn ‘Ginge’ Ford and Matt Bond (Slipknot, Trivium and Bullet For My Valentine), All To Ruin reveal a bigger, bolder, and more flavoursome sound in Among Us with, as earned by the earlier release, similar if not greater responses expected in return. 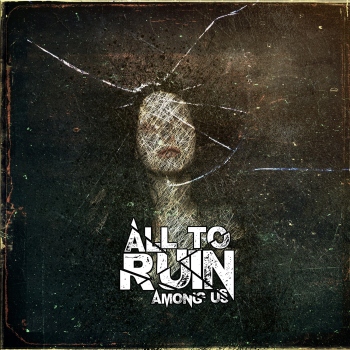 The EP opens with Take The Reins and instantly encases ears in spicy grooves, hungry riffs, and punchy rhythms. Vocalist Aaron Roberts just as quickly brings his impressive voice to the affair whilst the guitar of Rhodri Williams provides a spiral of sonic enterprise and temptation. That new strength in songwriting and sound needs little prompting to show itself, as too a bolder imagination as the song slips into a gentle melodic embrace of voice and guitar. The thick swipes and rolls of drummer Tom Richardson keep an aggression bubbling though, eventually becoming the spark for a return of the opening impassioned roar of the encounter.

It is heavily enticing start to Among Us taken up another level by its title track straight after. Jabbing beats and a dark throaty bassline from Dan George provide the initial bait, their intimidation swiftly wrapped in the sonic tendrils of guitar. It all evens out as a warmer but no less imposing weave of increasingly gripping melodic adventure unites with the tempestuous and intensive rhythmic side of the proposition. There is also a drama to the song, emotionally and physically, which reveals more of the inventive and mature edge to the band’s creativity. An orchestral seducing in the background of the song helps that theatre arise as it flirts throughout, and once given its clarity, simply captivates in the finale of the excellent song.

Certainly there are plenty of recognisable elements on the two songs so far, but in reality that kind of applies to most releases these days, and as mentioned when songs like Among Us and the following Disconnect bellow with passion and imagination, it is predominantly a flavouring which only adds to the enjoyment. The third song brings a similar canvas to the previous track, an emotive orchestral colouring immersing the imagination as rhythms plunder the senses and vocals unleash the heart of the proposal. Aggressive and reflective simultaneously, the track spins another intriguing web of sparkling endeavour soaked in familiarity though it reveals itself to be even stronger in enterprise and emotion.

Aggression fuels History next, the best song on the EP driven by a creative snarl and provocative energy spawned by carnivorous riffs and uncompromising rhythms. Rather than being tempered this is complimented by the blistering sonic exploits cast by the guitars and the inventive twists further stirring up an already explosive song. On the last EP there was one song which stood out and pushed the envelope on the release and on Among Us it is History.

The EP comes to an end through Beneath The Steel Sky, a blaze of melodic rock which like a friend wraps enjoyably around ears and feeds the appetite. As shown here, technically the band has grown impressively as they have in songwriting and sound, but it is the imagination which lines every song which most stands out even if uniqueness is taking longer to come through. As with Parables though, Among Us suggests it is looming and closer still, but again the reality is that as songs consume ears and imagination only thorough enjoyment is the outcome.

The Among Us EP is available from April 27th via http://www.alltoruin.bigcartel.com/ and through all stores.