Though not a new band, Entropy O.A.C. will be making their introduction to most outside of their local fan base with new EP, Dark Clouds and Clarity. A rather flavoursome and enjoyable proposition it is too; not one tearing up the melodic rock/metal scene but certainly one bristling with potential and great ideas brought with a craft and maturity developed by seasoned veterans of the heavy music scene. Consisting of three tracks, the release is a constant spark in ears and imagination. It most likely will not have anyone roaring from the rooftops but for an entrance into a much broader global spotlight by the band, Dark Clouds and Clarity is a strong and captivating persuasion.

Formerly just called Entropy, the Spooner in Wisconsin hailing quartet self-released their debut album Smiles For Stab Wounds around 2004-05. It was well-received by fans and critics alike but followed by a period of line-up instability before the band returned in 2011 with the What Nightmares Are Made Of EP. Its success and potency led the band to a developmental record deal with Pavement Entertainment and now the release of Dark Clouds and Clarity. In many ways the last three years or so has been a fresh start for Entropy OAC, one which you get the sense from their new release and words offered that the foursome of original band members Ben Poulin (vocals) and Josh Aalto (bass) with Austin Wagner (guitar) and Brandon Hall (drums) are going to make the most of. 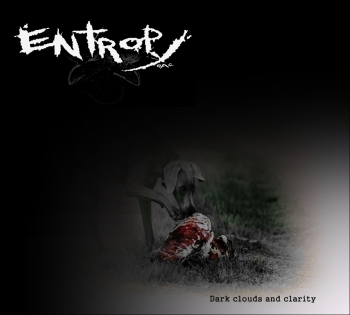 The Ryan Guanzon produced Dark Clouds and Clarity opens up with Failure to Thrive, and instantly builds an imposing wall of intimidating rhythms, equally predatory riffs, and a part spoken vocal delivery from Poulin which reeks of discontent. It is a strong and compelling start with a feel of Stone Sour to it and continues to entice and grip until the song erupts into a belligerent stride punctured by the sinew swung beats of Hall. Guitar and bass create their own raw causticity and menace as Poulin merges melodic and snarling tones in his delivery to fine effect. The track does not explode and rampage as you think it would once hitting its stride, as it suggests it might and personally we wanted it to, but there is no denying it loses none of the hold it gained by its potent start. Grooves and hooks spark throughout the mix of melodic metal and emotion fuelled rock ‘n’ roll, again to pleasing success and temptation even if originality is less potent. The willingness of the band to mix soft and harsh elements, light and dark textures is a plus too, and the fluidity they achieve it with.

It is a great start to the EP soon overshadowed by the excellent Endless Fire. The song almost sidles up to ears, though heavy bass resonance and drums thumps means it swiftly gains eager attention, as do the spiralling strains of guitar and again strong vocals. Melodies and scythes of sonic invention are like flames against the earthier canvas, licking the more aggressive essences of the song whilst helping breed a contagious air. Simultaneously roaring and crooning, the track is a thrilling example of the band’s talent and potential, and easily inspiring an appetite for their sound.

Realm of Grey completes the EP’s offerings, a track straight away leaning into the band’s metal voracity whilst bringing a raw edge and attitude to their melodic endeavour. Again Stone Sour comes to mind, which is no bad thing, whilst invention wise the track is maybe the least dynamic and adventurous compared its predecessors but has plenty to engage ears and thoughts with. Subsequently increasing its persuasion with the addition of small twists within a greater voracious intensity to the song, it makes a highly satisfying end to the release.

There are only things to enjoy about Dark Clouds and Clarity and plenty of promise to get excited over, and right now with their highly satisfying release, Entropy O.A.C has announced themselves to wider awareness in solid and potent style.

Dark Clouds and Clarity is out now via Pavement Entertainment at most online stores.