The energy around the arrival of and anticipation for Infinite Variety, the second album from Scottish band The Cathode Ray, ensured that intrigue and enthusiasm of a great many was high going into the release. It is fair to say that the proposition not only lives up to hopes and expectations placed upon it but leaves them lightweight against its kaleidoscope of fun, sound, and adventure. What was not predicted here was the nostalgic impact it had on ears and thoughts, as well as memory, for our first time with the band. Musically it weaves in essences from the seventies and eighties into an invigorating modern tenacity but it was finding out the background to the members which inspired us to first trawl through cases of vinyl on a nostalgia trip to relive old favourites ashamedly neglected over time.

Formed in 2006, The Cathode Ray was initially a song-writing collaboration between Jeremy Thoms and ex-Josef K frontman and solo artist Paul Haig, a band and solo project straight away dug out for a reprise in the ears. A couple of well-received singles followed before Haig left the project in 2009. Taking it over Thom enlisted guitarist Steve Fraser once of Edinburgh post punk band the Scars, another enslaving proposition for our passions way back, and alongside him drummer David Mack and bassist Neil Baldwin to complete a new line-up, the latter bringing another search through boxes to relive the glories of the disgracefully under-rated Bluebells and post-punk group TV21. Once that was out of the system it was full-steam ahead with Infinite Variety, an album swiftly living up and more to anything its creators may have helped craft before.

The album’s landscape uses various decades of sound as its palette, twisting and shaping them into unique and colourful proposals with a lyrical exploration to match. Said to loosely be a concept album, Infinite Variety visually and aurally references the natural world whilst looking at emotions involved with the human condition. The songs are kind of bundled into three areas; ‘fear, paranoia, lust and betrayal’ spicing the first few songs before looks at ‘transformation, honesty and realisation’ and subsequently love in various light and dark forms flavour the tracks. Like in a kaleidoscope though, it all seems to disarrange and evolve with every twist of a track to provide an on-going and increasingly fascinating adventure. 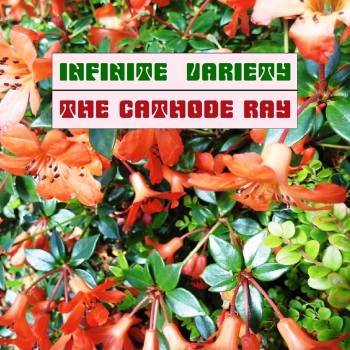 That diversity to songs is one of many potent aspects to the album and it all starts with the outstanding Backed Up. A simple rub of guitar and accompanying cowbell prods make first contact, soon joined by crisp beats and an expanding coaxing of melodic enticing. The expressive tones of Thoms join the widening incitement next, his entrance awakening bolder enterprise in the guitars, whilst riffs and hooks come with a great post-punk spicing. The reserved but lively melodic invention provides a sultry colouring which the dark bass tones wonderfully temper whilst vocally Thom drives it all with a voice which is like a mix of Pete Shelley and Ste McCabe to offer another rich texture within the potent album starter.

It is a strong beginning straight away eclipsed by the outstanding Resist, one of the most addictive slices of warped pop you will come across this year. Its hooks instantly get under the skin and into the psyche, swiftly followed by the vocals and the thick bass bait. The song’s infectiousness is simply virulent bringing a whiff of The Revillos to its power pop stomp, a passing scent not as strong as the Buzzcocks like catchiness which oozes from the following Nowhere At All. Again it is merely a spicing though, this time to a captivating stroll of imaginative percussion, imposing rhythms, and addictive enterprise, all soaked in inescapable contagion.

Don’t Waste Your Words strides in next to bring an addictive lure of hip swinging rock ‘n’ roll. Feet and ears are an early submission, whilst the capture of the imagination is barely a drum stick swing away in the riveting temptation of the song. It is not alone in offering hooks and a presence which are indelible in thoughts and emotions even after the album’s departure, but it is probably the most intoxicating though matched straight away by the excellent Buck The Trend, a song with a healthy breath of Tom Verlaine and Television to it. Keys and guitar spin a gorgeous eighties web for the rhythmic and vocal prowess of the song to pull this way and that, a combination sculpting another major highlight in the album. There are times across Infinite Variety, like here, where thoughts wonder if the band may have missed the boat with their sound in the fact that The Cathode Ray would have surely been a big inspirational player in the eighties. Every time that suggestion raises its head though band and album almost in anticipation provides evidence to differ, like No Holds Barred which comes next, proving that they are definitely a perfect fit for the now. The song is a slower but similarly infectious offering with a held in check energy which still has body and emotions swaying feistily with its low key and thoroughly addictive swagger. Once more riffs and melodies combine to create a fresh twist and distinct romp of sound and invention in the album.

The brilliant Eureka Moment! is simply a montage of eighties goodness crafted into a transfixing and exotic jungle of imagination fuelled rhythms, Scars like sonic sweeps, and Bluebells bred melodies. It feels like a song dipping into its creators past exploits and those of others whilst equally drawing on new ingenuity. The John Foxx led version of Ultravox comes to mind as does The Creatures as the track seduces and incites but again they are just particular hues in an new enthralling and thrilling aural conjuring by the band.

This Force Of Nature brings its flowing melodic breeze next, female vocals seducing alongside the tones of Thoms, whilst Torn Apart explores an immersive and haunting cavern of sonic reflection which in many ways has seeds to the likes of House of Love and My Bloody Valentine. The absorbing and mesmeric encounter, as so many songs, keeps the album turning over in imagination and invention, as well as variety, before making way for the post punk croon of The Eyes Are The Window To The Soul. With a bassline which recalls early Cure and an Orange Juice like jangle to its chords, the song is bewitching and engagingly dramatic like a modern day Associates.

The album is closed by the elegant reflection of Saving Grace, a semi-acoustic ballad which simply whisks ears and thoughts off into hope soaked clouds under a smouldering exotic sun of melodic temptation. The song is spellbinding but also only telling half the story at this point. Around mid-way the calm is suddenly infused with ominous rhythms and sinister keys, nothing over imposing but certainly a brewing provocation which is soon ripe with surf rock tendrils of guitar and a tempestuous air. As if warning that good times still offer a stormy adventure, the track is irresistible manna for ears and imagination with seven minutes of sonic alchemy.

Infinite Variety is quite breath-taking, leaving thoughts basking and appetite hungry for much more. There have been many releases and bands recently creating real triumphs of nostalgia and new invention, but The Cathode Ray tops the lot.

Infinite Variety is available through Stereogram Recordings now on CD and download via http://www.stereogramrecordings.co.uk/audio/infinite-variety-the-cathode-ray-cddl/