Dirt Box Disco – Only in it For the Money

You always know what you are going to get with a Dirt Box Disco album yet they still push their sound and invention on each and every time to never sound stale or repetitive. With their new release though the UK punk ‘n’ rollers, who have been stomping and a hollering since 2009, have really pushed the creative boat out and come up with a collection of their most diverse and adventurous songs yet. Only in it For the Money is by far the pinnacle of their rampage so far and that is without losing any of the insatiably mischievous and dirty devilry which has equally gone to make Dirt Box Disco one of the most greedily devoured and roared about rock ‘n’ roll bands in Britain.

Whether it is because principal songwriter Spunk Volcano has pushed his boundaries with his solo project or it is just an organic progression, the new album is a web of diverse punk flavours retaining the key Dirt Box Disco sound. Previous album Bloonz impressed and thrilled but in hindsight it was not a big step on from its predecessor Peoplemadeofpaper. The question was had the band come to the end of its potential? Only in it For the Money is a swift kick in the nuts of such blasphemy and potentially the bridge between national capture and a global spotlight.

Band and album strike with voracious force in opener Guest list, a track which hits with the welcome DBD signature character but equally stirs up a new nest of creative hornets. Its initial touch is a stinging coaxing which in a breath turns into a turbulent stomp of anthemic vocals and compelling riffs. Sculpted on the confrontation every ticketed show must come up against, the track is pure virulence and if you are not leaping around and yelling within the first minute we suggest you call the paramedics as you might be on your death bed. Quite simply punk rock, indeed rock ‘n’ roll does not get any better.

The Art Of Conversation follows and presses ears with a broader rock sound before rigorously crooning vocally and antagonistically, at the same time breeding swiping rhythms and raw riffery. Contagion is always a given with the band’s songs and again here it is an irresistible persuasion amidst the coarser raging of sound. There is a great Buzzcocks bred hook within the tempest too, just a slither of tang but an intoxicating hue in the imposing slab of punk ‘n’ roll. 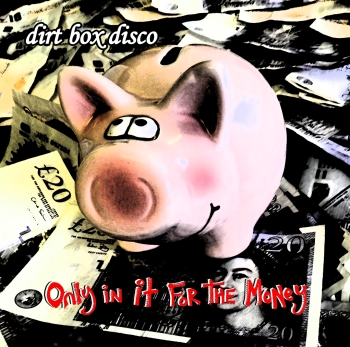 Like the music, lyrically the band get to the point, no bushes worked around to make an impact and if it takes a uncultured approach to get the impact needed so be it, and so it is with Fat Twats And Scumbags. From an Oliver like plea, the song is a prowling and bitter dagger drawn predation on the state of society and political agendas bred from old school punk and furious metallic provocation. The track is an animal and already three songs in revealing that earlier mentioned variety in the character and heart of the album.

Something In My Eye revels in a raucous pop punk canvas next. Riffs and beats are a tenacious abrasing to which the great vocal mix across the band led by WEAB.I.AM brings tasty infectiousness. It is the blaze of classic rock seeded guitar from Danny Fingers which steals the show, though only just from the rest of the essences making up one addictive encounter; a contagion just as potent in the similarly lighter brewed rocker I Dont Wanna Know Your Name. Galloping through ears with pure energy and melodic enterprise, the song is one of those sing-a-long moments impossible to resist physically and vocally, but then that applies to all their songs, certainly upon Only in it For the Money.

The following Crushed is a more expected DBD offering but again it has a fresh nature in its presence. The driving enticing bassline provided by Deadbeatz Chris takes hold from the first seconds, tightening its grip as the swinging thumps of Maff Fazzo cage and batter the senses. With the guitars of Spunk Volcano and Danny creating a flavoursome web of sonic endeavour, the track swiftly enlists the imagination and emotions though it is soon overshadowed by the outstanding Dirtbox Disco. A ferocious trespass of punk attitude and raging, this is a song we have been waiting for, the band name always lending itself to a song at some point and finally arriving as a predator fuelled by ravaging energy and compelling creative antics.

If You Want A Sexy Bird Join A Fuckin Band opens with a melancholic croon wrapped in Green Day like softness, its protagonist self-pitying over the lack of success with the ladies. The band is soon riling up against him though; it is quite simple if you want to score join a fuckin’ band. Surely not that easy but nevertheless the song continues to toy with a poppier punk sound battered with a hardcore old school punk fury, the result a thrilling union and collision with the senses.

There is a touch of Flogging Molly to parts of the excellent Please Dont Walk Away next, a thumping charge of a song with again a refreshing mix of rock hues in its surging fist pumping incitement, whilst Realy Fast Car is as much power pop as it is dirty rock ‘n’ roll. Think The Radio Stars meets Eddie and The Hot Rods then infested with the Dirt Box Disco DNA and you have one exhilarating onslaught.

We explore more seventies seeded power pop next with Cry Myself To Sleep, this time doused in the tantalising scent of The Damned. It is another offering where limbs and throat are submissive and eager to join in within barely a flood of seconds, but as suggested that applies everywhere as proven by the lively melodic croon of Day After Tomorrow. The bass seduces and vocals provoke a ready to play response immediately whilst the crisp beats and enticing riffs only add to an inescapable enticing simply oozing from the song.

We get pure DBD with Ladyboyz, lyrics as base and hilarious as you could wish and hooks as flirtatious and addictive as those at the centre of attention in the song, or so we are told. We have always wondered how personal, intimate to the band certainly the failed romance lined songs are, and even more so after this…a tale for another interview maybe? The track itself will linger and fester in the psyche once heard, especially its prime hook and that salacious chorus.

Only in it For the Money comes to an end through All Day Long, arguably the least adventurous and explosive track on the release yet another leaving ears doused in happiness and the album on a potent high. As suggested Dirt Box Disco have unleashed their finest moment yet, one which is a leap forward in every aspect from their previous impressive outings. They have set them self a new lofty marker for future releases to be compared to but this feels like a new dawning for the band, so easy to expect that they will simply take it in their creative stride.

Only in it For the Money is released April 19th 2015 on STP Records. For details check out http://www.stprecords.co.uk and https://dirtboxdisco.bigcartel.com

MAY 03 – The Dog House, Nottingham

MAY 09 – The Boathouse, CAMBRIDGE

MAY 29 – Liquid Rooms, Edinburgh (with The Buzzcocks)