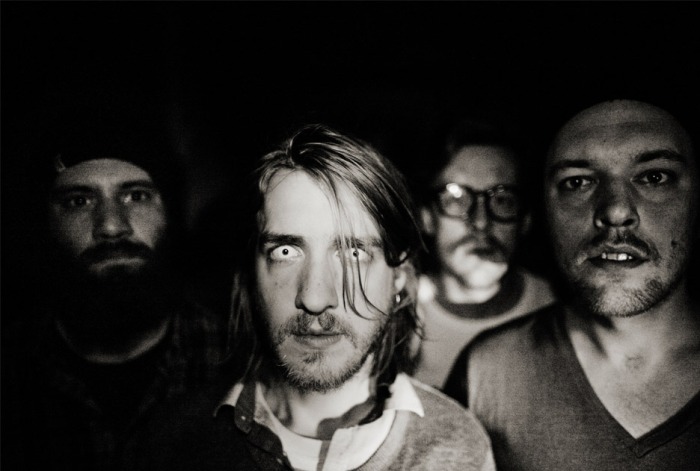 Barely a handful of weeks back, Belgium band Raketkanon not only ignited but incinerated the passions and imagination with the single Florent. A warped rhythmic dance immersed in a startling and ridiculously compelling tapestry of noise, the song not only announced the introduction to one compelling band but made a riveting and exciting appetising to the album it came from. Now that the release has arrived, and though Rktkn#2 does not always quite live up to that first initial seduction, it makes for one blissfully thrilling proposition.

To be fair when we say the album does not match the earlier appetiser it is not strictly true as where Florent was a swift explosive dig in the ribs of attention and lust, many of the songs within Rktkn#2 provide a slow and intensely simmering temptation which need time to convince and seduce. Ultimately they do though, ensuring every listen is a fresh and perpetually unveiling exploration that is very easy to rigorously enthuse about.

With their name meaning rocket cannon in Dutch, Ghent hailing Raketkanon create an experimental incitement seeded in a wide array of sounds and flavours. From sludge and doom to noise and psychedelic rock, the band’s music has a distinct character and invention which defies comparisons on the whole. Some have offered Melvins and Tomahawk as references whilst we could suggest the likes of Kabul Golf Club, Joy Division, Coilguns, and Young Gods as a hint to their sound but only listening reveals the dark majesty of the compelling drones, incendiary rhythms, and dramatic textures fuelling tracks and release.

The album opens with the aforementioned single and after a torrent of listens when first released, Florent still makes the greatest magnet for the band. As feedback and sonic enticement lead into discord kissed enterprise surrounding an unrelenting prowl of invasive rhythms, the track preys on body and emotions. It has a threat, a danger, and a fascination which just engulfs the ears and psyche. The quartet of Jef Verbeeck, Pieter de Wilde, Lode Vlaeminck, and Pieter-Paul Devos continue to entrance as scowling vocals from Devos spill from his throat over the expanding web of noise. A post punk tone to the bass also emerges more prominently as the song takes to a meditative respite midway; it’s tempting aligned to twanged guitar endeavour and a calm which is almost as portentous as the returning deranged dance of noise. The song never turns into a raging fire though; its droning reserved and its croon certainly unhinged yet controlled, with only the vocals a bedlamic fury.

With each song titled by a name, Nico Van Der Eeken comes next and it too opens on an immediate bait of slow but focus grabbing beats before creating a spiralling weave of synth brewed intrigue. The effect coated vocals also have a restrained introduction though it cannot stop them bringing inviting mania into the mix. They surprisingly remain ‘subdued’ as the song raises its intensity and voracity, taking centre spot in the quieter moments of a song which despite its energetic pursuits is also nothing less than mesmeric. A flush of hardcore like influence eventually ignites the vocals in an inflamed finale to a song, and end and song leaving thoughts and emotions startled and enslaved.

The following Suzanne has an instant swagger to its lively entrance and a more stoner-esque air to its melodic sultriness, both aligned to the ever vocal and enticing down tuned coaxing of guitars. The track is a more recognisable rock proposal initially, stomping with aggression and energy before wrong-footing with a drop into calm evocative waters, a simple melodic caress accompanying similarly gentle vocals. Of course all that we suggest has another lining to it, a generally indescribable one which festers and grows into something different, here a psychedelic wind of stark and uncomfortable but mentally and physically stimulating trespass growing from the calmed storm.

The albums adventure twists around again with Mathilde, the song a gentle embrace of cold but welcoming guitar and wistful low toned vocals over repetitive and wonderfully hypnotic bait. For three minutes its sombre yet magnetic temptation enthrals before lifting its muscular head and weight with a new angst in riffs and vocals matched by a dark fuelled bassline and fiercely jabbing beats. Doomy and embracing essences of post rock, the song is one of those longer to persuade but emerges as a spellbinding and ever changing sonic emprise of emotional and physical evocation.

Elisa is another long term simmering in regard to getting under the skin but with a spine of rhythmic repetition and eruption into an angst pooled vat of intensity and sonic rapacity it wins out. Exploring a more alternative rock premise whilst continuing to throw in a constant barrage of musical and inventive curveballs, it takes time to grip the passions unlike Ibrahim which has them enslaved within the first few moments of its driving and almost sonically mystical opening. The track is sensational, a rival to the opener and a tantalising maze of spicy endeavour with an imagination bordering on the chaotic yet staying within a sculpted framework, though to be honest that in itself is bordering psychotic.

Straight away another irresistible triumph is unleashed through Harald, a contagion loaded song which is as funky as it gets in a noise woven, distortion fed, and sonic crazed enterprise. Its opening minute is sheer infection but it is when the band unleashes a rhythmic stalking bred from the same wells of invention of a Wire or Gang Of Four that the track kicks off a torrent of lustful reactions. Entangling disorientating sounds, raw vocals, and sonic disturbances, the track sculpts the most enthralling and mouth-watering demented soundscape.

The album closes with the epic Hanz, a track maybe too long for personal tastes though not one moment of its nine minutes is lacking certifiable invention and engrossing ideation. Its low key emergence is soon a continually growing and intensifying brew, harsh but gentle sounds gaining an edge and attitude in many ways before finally breaking into more tempestuous scenery, though that too is just a stage in the evolution of the song. Cinematic, transfixing, and atmospherically brooding, the track eventually finds its heaviest, intrusive touch at its climax. It is a fascinating end to the album if not the most easily accessible without plenty of attention.

As we said at the start, Florent brought high and excited hopes for Rktkn#2 and the scintillating encounter has not let us down. The single forged a plateau for the band’s music which was always going to be hard to persistently match but plenty of tracks within the album do and those missing its ledge still leave a seriously enjoyable and creatively innovative experience to greedily devour. Bottom line is that Raketkanon is a must for all fans of noise, discord, and experimental challenges.

Rktkn#2 is available now via KKK Records @ http://raketkanon.bigcartel.com/ on CD and vinyl and digitally @ https://itunes.apple.com/us/album/rktkn-2/id972774371