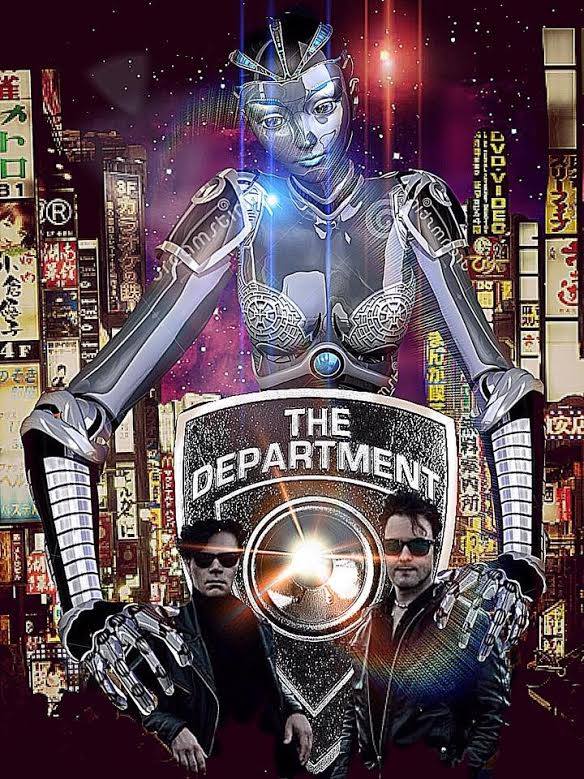 Like an A-Z of synth and electro pop bred in a parallel universe, the debut album from Swedish/British synthwave band The Department is one of those introductions which simply absorbs attention. A feisty mix of nostalgia and fresh imagination with a perpetually virulent infectiousness, Alpha blossoms with familiarity and new invention, embracing past decades whilst opening up new adventures. Two years in the making it is mostly though, one fascinating and exciting proposition leaving ears and pleasure with seriously greedy appetites.

The Department is the creative project of Londoner Rob Green (vocals / synth), who used to make progressive house records in the mid-nineties under several monikers, and Gothenburg musician Magnus Lindström (synth) who also plays in Swedish electro band called Mr. Jones Machine. United as The Department in 2012, the pair has since played with the likes of Naked Lunch, The Woodentops, Ekkoes, and Kids On Bridges, and at such venues as Romo Night club in Sweden, the 100 Club, Analogue Nights, The Hope & Anchor, and The Macbeth, all to increasing attention and acclaim. As mentioned they have spent the past two years working on Alpha, a release which in return immediately thrusts the duo into the full gaze and frontline of modern electro rock and pop.

From the first embrace of opener Don’t Give Up, the band’s album is a revolving kaleidoscope of recognisable sounds and flavours crafted into original and bracing exploits. Song one makes a slow and suggestive entrance as electronic percussive coaxing brings a slightly portentous feeling to the immersive and stark breeze of the synths. As their presence and melodic expression expands, so does a warmer underbelly to the emerging song, spreading and intensifying with every passing melody and hook. Not only musically but also through the Dave Gahan like vocals of Green, there is no escaping the Depeche Mode essences flirting from within the melancholic yet vibrant landscape the song. It is a transfixing spice embraced by the expressive and evocative imagination of The Department.

The potent start to the album is straight away reinforced by both Take My Hand and Glass Houses, the first of the two opening with chilled synthesiser minimalism reminding of The Normal. Its industrial lilt leads to broader endeavour and a breath of early Human League to tempt the imagination, and if you had to pick any general if loose reference to describe Alpha, the late seventies era of the Sheffield band alongside Fad Gadget would be our choices. The song itself is a wonderfully small yet again busily lively encounter, sparking in ears and the imagination with its gentle revelry whilst its successor provides a more anthemic pulsing and melodic catchiness which offers hints of the synth pop days of Al Jourgensen and Ministry. It too remains a restrained and reserved romp of energy yet has plenty to urge feet into action, and at barely two and a half minutes long, is one sublime slice of synth pop.

Come Inside has a great steely twang to its opening rhythms and opening hook, their union making for a compelling lead into another minimalist terrain as pungent and provocative as any full-blooded sonic rampage. Infection loaded, a given with every track upon Alpha, the song has a swing to its body and energy to its melodies which is almost Heaven 17 like, a whisper backed by the equally catchy essence of Green’s vocals.

The album’s debut single As If Transformed comes next, a captivation of cyber drama driven by effect wrapped vocals, sonic niggling, and a fuzzy bluster of electro wind around an endearing weave of melodies. The repetitive nature of lyrics and sound only adds to the theatre and shadowed heart of the encounter, an emotional edge which definitely has a Frank Tovey like exploration to them. Its dark fascination is mesmeric but instantly outshone by the tenacious beauty and vibrancy of Days Of Liberty, a song on an addictive rhythmic march whilst draped in just as irresistible and vivacious melodic radiance. It is pure addiction with NEXT SINGLE all over it.

Through the cooler air and emotion of Not For You and the wonderfully sinister seduction of Skin Vultures, the album’s magnetism is only compounded. The first of the pair provides a mellower tone and smoother flow to its presence compared to the previous song, with synths gliding over the senses as the baser elements of the track pulsate with heavy emotion and suggestiveness matched by Green’s equally expressive tones. The second of the two is seeded with a Fad Gadget like provocative drama, every slither of electronic bait and melodic entangling of ears, offering new avenues of reflective and emotive exploration. It is a dark caress of a song but again magnetically loaded with bewitching echoes and touches of warmth and captivating light.

The enchanting beauty and shadowed emotion of Slow Down keep thoughts and emotions gripped next, its elegant sonic poetry followed by the just as finely textured and enthralling Let It Go. It too opens its heart with a merger of light and dark, continuing the personal and musical intimacy which veins the whole album and arguably finds the most dramatic and traumatic depths within The Waiting Room. There is a thick Martin Gore feel to the songwriting and voice of the song; it’s haunted dark tones a seemingly volatile yet firmly bound incitement within the inescapable threads of melodic temptation lighting the gripping encounter. The track is gorgeous, a croon come dark serenade earning its place as the pinnacle of the album and as the most immersive and incendiary proposal for ears and imagination.

Even The Sun offers a potent and pleasing encounter next, though after the last song it is a paler incitement through no real fault of its own. It still feeds appetite and satisfaction nicely before The Gothenburg Reprise Remix of As If Transformed brings the album to a close. Anticipation for Alpha from fans has been eager and no one has been left short in pleasure and enjoyment by the outstanding release. The Department had some big expectations to live up to but they surpassed those with ease whilst giving us all a very welcome dose of nostalgia.

Alpha is available from March 27th via Hard Cell Records, digitally and on CD @ https://hardcellrecords.bandcamp.com/releases