If there is one perfect example of something doing and providing what it says on the tin then it has to be the debut album from US aggressive fury Unrest. Called Grindcore, the twelve track ravishment is the genre in full voracious assault, a vicious and hostile incitement as raw and uncompromising as it is virulently compelling. It and the band has a sound which is stripped bare of all unnecessary deceits, a proposal revealing the raw heart of the songs and inspirations breeding their fury and voice. It is an incendiary persuasion embracing caustic vocals and a primal passion, and one of the year’s mightiest insatiable roars so far.

The album has been one long awaited and highly anticipated offering, its origins going back to 2006 when vocalist/guitarist Steve Jansson and drummer Chris Grigg unhappy at the demise of Nasum, decided to try writing their own grindcore thickly inspired by said band. They soon enlisted friend and bassist Brooks Wilson and produced a horde of songs, played numerous live shows, and recorded their debut album in 2011. It was an offering never released, the band deciding it would need to be heavily recorded at some point in the future. Other projects and opportunities came up for members in the meantime, Grigg continuing with black metal band Woe which he founded in 2007, whilst Jansson and Wilson went on to found TrenchRot, Crypt Sermon, and Infiltrator. Last year the original mixes to the album were re-discovered and found to be usable. New vocals were recorded that summer, followed by the album’s new mixing, and now via Unspeakable Axe Records, Grindcore sees the cold light of day, and in return gives us a merciless snarl. 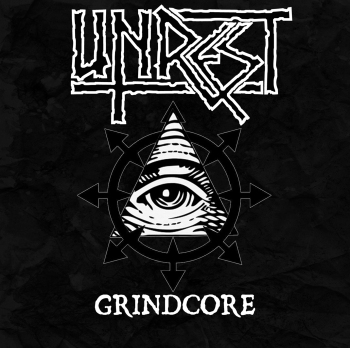 As soon as opener We’re Calling You Out unleashes its rage and sonic ire, thoughts of Nasum, as intended, surge forward, as do hints of bands like Napalm Death, but equally and continuing over the rest of the release, there are plenty of new essences and blistering invention which makes it so much more than a homage to its inspiration. The first song slips in on a piercing sonic lance of pain, threatening and gripping attention ready for its subsequent forty seconds or so of grindcore toxicity. All three members bruise ears in their individual ways, rhythms a hellacious onslaught whilst the guitar singes the senses. The infernal raging led by Jansson’s vocal squall continues into You Take and beyond, the second song battering ears with a muscular rhythmic intent from its first breath, inviting a carnivorous bassline and tone within the next, and casting a rabid assignation between it and the psyche thereafter. The bass grooving is pure predation, equalled by the furious scourge of guitar enterprise and its own grooved tempting, but ultimately the track is a malicious conquest of senses and emotions.

The seriously brutal Inaction, as well as the following grievous violation posing as Quit raises the ante and intensity of sound and pleasure. The first is a riveting tsunami of spite and rancor which merges sheer unbridled savagery and slow venomous stalking into one addictive raging. Its inhospitable hardcore tendencies only add to the gripping persuasion whilst its successor is simply bestial in tone and aggression, carrying a rancor which makes the brutality of its predecessor almost lightweight in comparison. Once more the trio toy with gait and ideation within an intensive tsunami, never deviating too far from its core rampage but bringing plenty to challenge expectations and ignite the imagination. The track flows straight into Protest Culture, though it is no simple continuation but an individual torrent of musical bad blood bred from the same inventive and instinctive grudge.

Through the tangy and provocative, almost doomy terrain of Faith Is A Hearse, the thrash/death tirade of Anything To Shock, and the swaggering violence of Nothing (That’s All You Have To Give), band and album uncage further creative adventure, merging new stirring flavours and spilling thicker antipathy across the individual grudges. Each offers a new twist in sound and invention within the album too whilst still flourishing in that Nasum inspired base camp, and all leave ears and appetite greedier, a hunger Identity In The Internet Age and Consumption feed with their respective blackened hardcore ravaging and thrash fuelled rabidity. Both are also virulently contagious as they bruise and scar the senses with their ruinous appetites.

The album comes to a formidable close via firstly the exhausting and sonically scalding False Brotherhood and lastly with the rhythmically addictive and antagonistically crabby Drown, and though neither quite matches what came before, both bring a fine slab of delicious nastiness to create a thoroughly enjoyable close.

There are some tracks upon Grindcore which hit the sweet spot more than others but all impress and prove the long wait for the album, indeed a release from Unrest, was really worth waiting for. Hopefully the band can remain an on-going provocation hereon in with more sounds bred in thrilling and pungent toxicity.