The Great Game – Self Titled 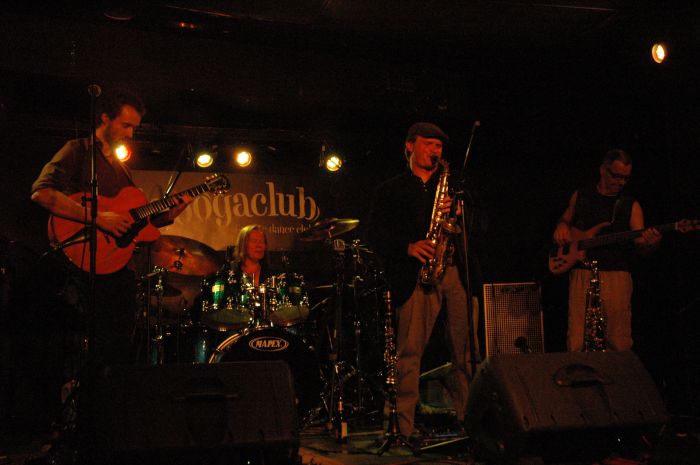 It is a kaleidoscope of diverse sounds, a maze of unpredictable twists, and a tapestry of imagination bred adventure, but most of all, the self-titled album from The Great Game, is one captivating joy. Consisting of thirteen fascinating and invigorating celebrations of world bred sounds, the release is a delicious creative devilry which at times has the passions sighing in lustful pleasure and always has ears and imagination engrossed.

The band is the creation of Belgian composer and classical guitarist Mounzer Sarraf, and a union of musicians from across Europe, the Middle East, as well as North and South America. The band’s songs draw on the background and musical influences of each band member, entwining it all into exploits which defy precise description whilst creating aural travelogues which again embrace a myriad of flavours and styles in each individual creative emprise. Created from May 2014, when the full band came together for the first time, they make up one fun and mouth-watering introduction to The Great Game. Now released as a free download to “give as many people as possible the chance to get to know the music”, the band’s album is a fascinating and thrilling entrance by The Great Game.

The album opens with Science, and instantly has attention in its grasp with its opening electro like dance. It is a keen enticement which continues to coax ears as a warm caress of brass and the magnetic lure of rhythms unite with the instantly likeable tones of vocalist David Hastings. Its straight forward start is soon showing signs of unpredictability, warped essences teases in the background of Sarraf’s guitar enterprise and the continuing lively shimmer of Paul Chamberlain’s accordion which set it all off. Evolving through a blend of funk, jazz, and worldly sounds, to name just three of the textures, the song forcibly bewitches before making way for the rawer rock of Religionism. Crisp jabs from drummer Bruno Meeus and an understated but vocal bassline from the strings of Manuel Saez Canton shadow the scuzzier touch of Sarraf’s guitar. It is a tempting start if lacking the spark of its predecessor, but takes little time in welcoming flames of sax from Martin Fell and an animated stride into an emerging gypsy punk like proposal. Melodies and vocal causticity combine as a mellower rock croon also breaks out, it all again combining for a fluid and intriguing, not forgetting enjoyable encounter.

The Turning Of The Wheel Of Dhamma steps up next, its jazzy swing and rhythms a new twist in the album’s scenery. Vocally there is an intoxicated lilt whilst the guest trombone of César

Ralleyguieb and trumpet of Jimi Garcia croon with melancholic expression within a smoky atmosphere. That sombreness is a deceit though, a creative smile and brass vivacity wrapping its charm around ears with an almost mischievous glint in their melodic eye. It is a bewitching offering, if one not quite holding its grip in the livelier finale, and matched by the folkish embrace of Television straight after. Featuring the lead vocals of Inbal Rosenblat, the entrancing song moves from a gentle sway into an energetic shuffle, ignited further by great and slightly psychotic backing vocals.

Another peak is hit with Bipolaroid next, the track initially a grunge seeded proposition bringing a feel of Tool to ears, which suddenly drifts into a second long quiet before returning with a psychotic look on its creative invention. It still roars with that grizzly rock breath and attitude but is soon discovering an agitation in its rhythms and a bedlamic character to its devilry, especially in the guitars and Fell’s blazing sax calls. Thoughts of French band Toumaï spring to mind at this point, the track an ingenious web of slightly disturbed twists and that fiery rock roar, vocally and musically.

Calm returns with the sultry Elhechizo De Hoy next, a kiss of Parisian charm blessed by the returning mesmeric vocals of Rosenblat alongside the more dour but as alluring tones of Hastings. Its endearing melodic flame brings a smile to ears and emotions whilst the fuzzier Poetry in Motion sparks another slither of greed in the appetite with its fusion of funk, reggae, and progressive pop. Featuring the also captivating voice of Medina Whiteman, the track dances with body and emotions, offering a flavoursome seventies tang to its appealing vivacity. Both songs are like melodic magnets and matched by the Eastern European spun revelry that is Hungarian Dream. Carrying a whisper of Les Négresses Vertes to its spicy melodies and especially its robust gypsy swing, the song transfixes ears and imagination whilst setting down another major moment in an already thrilling album.

There is that glimmer of real mischief in Pax Romana which sidles in next, guitar and bass a restrained devilment against the more solemn vocals. An essence of Yello also tints the swiftly riveting encounter though as the brass gently but vocally spread their heated expression, they spark a fiercer yet still controlled rock ‘n’ roll tenacity in the track’s heart. It like so many simply grips attention and emotions, though soon shaded a little by the sensational And The Blind Man Lead The Way. It opens with a reggae honed enticement, a UB40 like tempting, before digging into a fierce and raw rock sculpted bellow. It is the discord which flirts with vocals and hooks which steals the passions though, its angst fuelled derangement and the aligning raging, twisting a strong song into an inescapable favourite.

The enjoyable melodic and harmonic croon of Elemental Raven Storm comes next, another smouldering landscape of reflective melodies and brass colour over a bracing and unpredictable canvas of rhythms and enterprise. With a seriously compelling vocal climax, the track departs for Slave Magic, an enthralling mix of rock and blues colours. It might not quite light the flames as previous songs but burns away with craft and enticing endeavour to ensure ears and thoughts are fully satisfied.

Final track is The Great Game. Listed as a bonus CD track on our promo but included on the download version too, the closing is a solid shuffle of melodic and vocal invention combined with a jazzy pop crooning. It can be described as The Tom Tom Club meets Spandau Ballet in some ways, and again offers a pleasing companionship though not quite on the par with anything before it. Nevertheless it is a good end to a great release from a band already facing an eagerness to hear more from.

The Great Game has a sound with something for everyone, though arguably that might also be a hindrance in their appeal for some who want more stable offerings. Safe to say though that this is a band we will welcomingly be hearing a lot more of and easy to suspect with increasing clamours of acclaim and eagerness.

The Great Game is available now on CD and as a free download from http://www.the-great-game.com/