The Reveurs – Take a Bow

Hailing from Manchester, indie rock band The Reveurs reveals their new single this week, a potent and resourceful slice of melodic rock with an intensive edge to its sound and nature. Consisting of two tracks, Take a Bow is not a spectacular explosion in the ear but an easily endearing and persuasive encounter only aiding the potent emergence of the British quartet.

Formed late2013, The Reveurs has certainly become an eagerly followed local proposition with a sound spiced by the influences of bands like Kings of Leon, Arctic Monkeys, and The Strokes. Their presence has been seeping into the appetites of those further afield too, something Take a Bow has the potential to take to a much broader success. As mentioned, the single does not leap out in an attention grabbing exploit but more smoulders and lingers, sparking a keen appetite and want to hear more of the band’s sound.

Take a Bow bounds in with energy and vivacity from the off, hooks and rhythms a feisty yet undemanding invitation. The song soon has ears and imagination intrigued, aided by a brewing 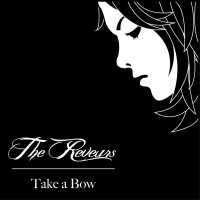 drama in those self-same opening lures and the melodic expression of song as well as the strong vocals of guitarist Gary Nelson. The punchy beats of drummer Ben Devenport command attention too, as does the throaty bass of Adam Molyneux, whilst the melodic strains cast by the guitars of Nelson and Iain Brewster create and colour the dramatic canvas of the song with magnetic hues. There is a sense that the song wants to explode into a more riotous endeavour at times but is held in check by the band for a fascinating and ultimately alluring proposal. There are moments you wish it would escape its reins but equally embrace the restraint and imagination of the band’s songwriting as the track leaves satisfaction full and ears keen for more.

This extra enjoyment comes in the accompanying Harriet, a more raucous but still melodically fuelled romp of catchy rock ‘n’ roll. More contagious than its predecessor though arguably less involved, the song takes the listener on a warm and vibrant stroll framed by a great rhythmic enterprise lined by an evolving bait of tangy hooks and spicy melodies. The track makes a highly agreeable and infectious companion to Take a Bow, both tracks showing why the band is held in high regard in their home city.

The single will certainly awaken a wider interest and awareness of The Reveurs, something the band has the potential to exploit to even greater degrees ahead, that an expectation already firmly assumed here.

Take a Bow is available from March 16th

Upcoming Live Dates for The Reveurs include: