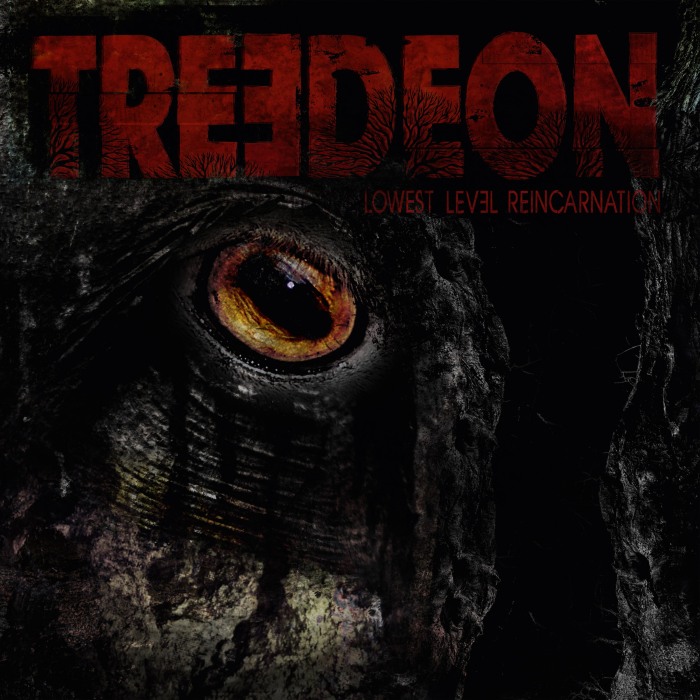 Surely bred in the depths of hell, Lowest Level Reincarnation is the ultimate seduction. Like a Hieronymus Bosch painting, the new album from German noise abusers Treedeon is a visceral kaleidoscope of vibrant addictive aural colours and inescapable temptations within a landscape of sonic and emotional torment. It is bestial, it is carnally intimidating, and it is an all-consuming swamp of savage confrontation but most of all it is one exhilarating trespass of the senses.

Treedeon emerged in 2012 when vocalist/guitarist Arne Heesch and vocalist/bassist Yvonne Ducksworth linked up after the almost simultaneous demise of their respective bands Ulme and Jingo de Lunch. Initially Treedeon was an acoustic proposition and made its live debut at 2012’s South Of Mainstream festival filling in for the by now disbanded Ulme. At this point Christian “Boomer” Böhm linked up with the duo, pledging himself as “the missing link” as he offered to play drums in the band. As songs were written and created, leading to an early demo, there was no escaping the heavier voracious element fuelling their sound, fury audiences soon heard at events like the infamous Roadburn Festival, where the band played as part of Exile On Mainstream’s 15 year anniversary showcase. The digital unveiling of the demo swiftly brewed up attention and buzz around the Berlin trio though it was a mere taster of more corrosively impressive things to come. Recorded at Studio Wong in Berlin last November, Lowest Level Reincarnation sets a striking marker for not only Treedeon but doom/sludge spawned noise punk in general.

The eight track sonic tsunami begins with Love Turns Liquid and immediately has ears and attention on board as the punch of Böhm’s premeditated slow swings rock the senses. It is not hostile bait he lays down but it is imposing and highly anthemic as each incessant jab awakens a keen appetite which is swiftly fed further by the grouchy voice of Ducksworth’s bass and the abrasing causticity of the guitar. Hooks are already flirting from within the building tempest of noise, leaping out on the subsequent sonic smog as Heesch’s grizzled vocals croon expressively and angrily. The rhythmic persistence of the eight minute plus track creates an inescapable trap for instinctive and primal needs whilst the doom soaked crawl of the song simply ignites ears and imagination; the encounter the perfect blend of erosive persuasion and addictive invention.

The following Blankapitation similarly attacks on two fronts, its rhythmic and grooved taunting a commanding contagion whilst the thick sludginess of the guitar’s enterprise is a suffocating and alluring raw embrace. It is the vocals of Ducksworth, who takes the lead this time, which strikingly ignites the track though, her delivery pure punk with an attitude to match. It is a thrilling contrast to the highly pleasing caustic attack of Heesch in the previous song and in his backing here, a creative aural stabbing of ears at times from the lady and a constant roar of belligerence.

Satan’s Need takes over next and within seconds consumes the senses in a tempest of fiercely heavy riffs and matching intensive rhythms, all bound with inflamed heavy grooves. The two singers share the track, duelling rather than dueting across its ravenous and exhausting turbulence. It has a harsh and acerbic canvas but also reveals an underlying swing to beats and grooves which does not temper the tempestuous nature of the encounter but certainly makes its punishment bewitchingly palatable.

Through the superb Extinction with its a rhythmic tempting, which is almost like a call to arms for body and emotions, and a sinisterly hued grooving, and the snarling Wendigo, band and album only heap on further corruptive influence and pleasure. The first of the two is the kind of flirtation you know will only lead to destruction but with the deepest carnivorous bass growl and tart grooves, not forgetting exceptional vocal endeavour, the track is the master of lustful submission. Its successor again embraces a stronger punk rancor in its erosive sonic squall. Ducksworth vocally is a fiery temptress and with basslines predatory confrontation as Heesch creates a warlike maelstrom of antipathy with voice and riffs, the song is an animus which flows in all ways into the equally venomous and scarring Venus With Teeth. There is no shelter from its sonic and intimate enmity or from the transfixing rhythmic craft and enticing of Böhm. It writhes like a plague ridden scavenger, spilling and spewing sonic spite and magnetic invention with every intensive and exciting twist.

The album’s title track worms into the psyche next, its insidious crawl of sound and malevolent emotion encroaching ears like a tar thick virus, consuming every pore whilst immersing the senses and thoughts into the darkest pit of depressive and oppressive toxicity. The song is spellbinding, an infestation of sound and intent you only want to devour more of, even if it provides the longest and darkest twelve minutes of your life.

Lowest Level Reincarnation is completed by the outstanding Terracide, another imaginative torrent of crippling and gripping rhythms aligned to incendiary grooves and impressive vocals from both Ducksworth and Heesch. That imagery of a Bosch composition again seems to fit the track, its presence and premise a sonic opening of hell’s pits.

Treedeon is that nightmare you can never be rid of but truthfully you look forward to, its challenge and adventure a dark and dangerous endeavour but cathartic and seriously rewarding. The same applies to the magnificent Lowest Level Reincarnation, an album sure to expose one intensively exciting prospect to the fiercest spotlights.

Lowest Level Reincarnation is available now via Exile On Mainstream digitally and on CD/vinyl @ http://www.mainstreamrecords.de/shop with its US release in April.