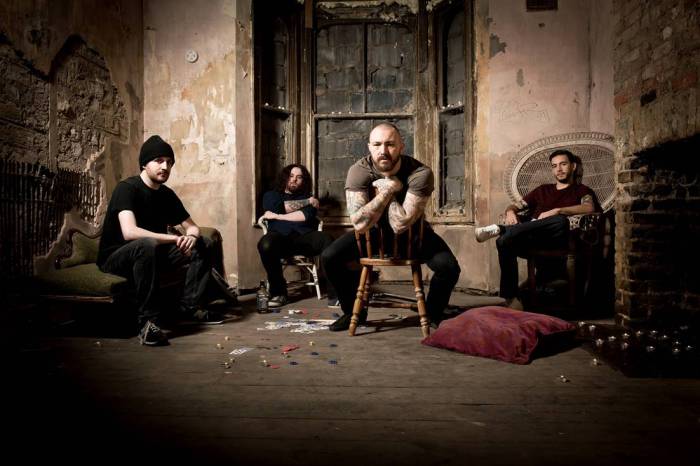 As Faceless Ghost, the new single from UK metallers Stoneghost furiously and creatively bellows in the ears, there is no escaping offering a hearty thank goodness. The reason being that the song and album it comes from, was written at a moment it is fair to say which was pointing to the demise of the band. This had come about because, in the words of vocalist Jason Smith; “I was having a kid and I couldn’t cope with it, I didn’t think I would be able to carry on with the band too, I wasn’t in a good place.” Deciding to go out with a bang and show the world the most potent essence and fury of what was Stoneghost, the South East London quartet created debut album New Age of Old Ways. Thankfully the band’s sound and new offerings found their way to the attention of the Mascot Label Group (Black Label Society, Volbeat, Gojira, Joe Bonamassa), and here we now are with the album scheduled for release in April, its lead single poised to stir up the European metal scene, and Stoneghost seemingly back on compelling course.

The Bromley band began in 2007 and swiftly made a potent impression on the London live scene. Forging a ferocious blaze of rock ‘n’ roll bred from varying strains of metal and a hardcore voracity, the foursome of Cris Finniss (drums), Jamie Nash (bass), Andrew Matthews (guitar), and Smith continued to grip attention and increasingly so across the UK, making highly successful appearances at Bloodstock in 2009 and 2010 with equally impressive performances at the Wacken Open Air festival and Metal Hammer’s Hammerfest IV in their wake over the next couple of years. It was 2013 when the band’s frontman had his ‘crisis’ and turmoil reached the band. Fighting through it though to subsequently record New Age of Old Ways with Russ Russell (Napalm Death, Evile, Dimmu Borgir, Sikth, New Model Army), Stoneghost is now ready to take their place at the forth of British metal and again we can only give thanks.

As the majority of songs gracing the album, Faceless Ghost was bred in that troubled time for band and Smith, the singer talking about the song recently saying, “It’s about my daughter, she was on the way, I was feeling apprehensive and scared about the responsibility and seeing a therapist at the time, I was having some really low points, but because I had a daughter on the way it gave me the reason to sort myself out.” There is a definite personal angst and passion behind the song which echoes that moment, an intimacy to its tempest which rages as potently as the ravenous sounds.

The song opens with a dazzling weave of guitar enterprise, a spicy melodic colour which captivates from around just as swiftly established and equally compelling rhythmic predation. Things only intensify and grip tighter as Smith’s punkish roar spills emotion across the thrash toned canvas. Grooves and hooks add different and fascinating flavours and textures to the song next, the proposition already transcending various metal subgenres whilst brawling with its own aggressive individuality.

Matthews’s superb sonic and melodic designs continue to ignite the imagination as does the lyrical force of the song, whilst bass and drums are predators within the magnetically spiced triumph. Across track there are glimpses of bands like Pantera, Bloodsimple, and Overkill, but only whispers in a sound which leaps out like a beast and incites body and emotions with tempestuous majesty.