It is hard to get enough of out and out heavy booted rock ‘n’ roll, especially when it comes in the kind of shape of the self-titled debut album from Italian rockers Madre De Dios. Consisting of eleven tracks which blaze away with all the instinctive and prime essentials any thumping rock song needs, the quartet’s introduction is a stomp of impassioned energy. The band is not interested in break down walls of originality it is probably fair to say but in bringing a release which anyone can give their bodies and pleasure to, the band has an undoubted success on their hands.

Hailing from Bari, Madre De Dios was formed in 2010 by guitarist Stefano Pomponio aka S.P. Jesus (Natron). The band’s first line-up was completed by bassist Gigi D’Angella (Anuseye), vocalist/guitarist Gianpaolo di Stasi (Stainer), and drummer Marco Ninni (Swedish Death Candy), a foursome who’s live presence was soon luring in increasing masses of devoted fans. Over time a more stoner-esque character emerged in their heavy rock ‘n’ roll propositions, their sound continuing to evolve as a shuffle in personnel saw vocalist Frank Bizarre (The Missing, Cafè Bizarre) and drummer Vince Floro (Stainer) replace di Stasi and Ninni respectively; the latter joining the band after his predecessor had recorded the album in 2013, and a year’s break for the band soon after. As the album, swiftly shows, the band’s sound draws in numerous spices from varying decades to create something familiar yet fresh and compelling. With shows with bands like Bud Spencer Blues Explosion also on their CV, 2015 is looking like turning into a potent and break-through year for Madre De Dios, especially as their album grips many more appetites like ours week by week.

The albums gripping devilry opens with The Evil Guide, a song exploding from a crotchety riff into a full on assault of bracing grooves and pungent rhythms within a blaze of melodic enterprise and tenacity. There is an immediate snarl to the song but equally a captivating infectiousness, every element an anthemic lure in the rigorous persuasion of the excellent incitement of feet and appetite. Just as swiftly the craft and creative attitude of the band is an open temptation too, every swing of the sticks, casting of tangy grooves, and vocal expression drenched in a stirring energy driven by personal adventure.

The same applies to the following High Living in the Sunshine, well every song on the album to be truthful, the track making a more deliberately controlled entrance but loaded with thick 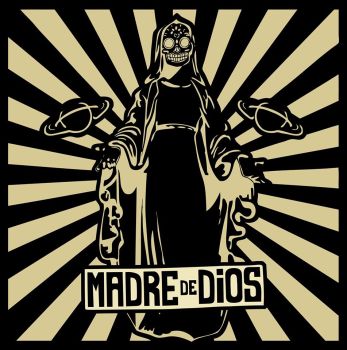 spicy grooves which make slavery of ears and imagination right away. Exploring a potent mix of hard and classic rock, the song is soon leading the listener in a sing-a-long chorus and head nodding participation for the slower but catchy stroll of its surrounding verses. Not as dramatically persuasive as its predecessor maybe, the song is still soon a masterful treat, and even more so once bluesy stoner bred temptation begins to colour the song’s increasingly appealing canvas.

That blues tang is just as ripe in Flamingos! which comes next, its rich spicery again merging with a more classic roar of rock as jabbing beats keep an antagonistic edge to the rhythmic side of the infectious encounter. This virulence is exploited further in the similarly sculpted Big Head. Coming straight out of the previous track there is an unmissable similarity to certainly the riffs and grooves of the song, though that is tempered by the excellent grizzly growl of D’Angella’s bass and the ever engaging dusty vocals of Bizarre, not forgetting a grunge meets stoner air which at times has a slight feel of Kyuss and Gruntruck to it.

I Crashed Your Car opens up our favourite part of the album, its rhythmic agitation and fiery melodies an exciting and inventive embrace for the magnetic vocals and creative majesty of Jesus’ solos. The throaty bassline also adds further irresistible bait for ears, its dark presence contrasting and complementing the increasingly imaginative weave of raw and spellbinding melodic ingenuity. As great as it is though, the song is just the appetiser for the delicious exciting meals of Shake it Baby and Mad City. The first as so many, just slips out of the song before with seamless and natural ease, and straight away unleashes an enthralling and invigorating rock ‘n’ roll dance. Like a sonic epidemic, the track is soon infesting ears and psyche, not to mention body and soul, as riffs and beats unite in a merciless temptation whilst grooves and vocals toy with the passions. Hooks are spilled left right and centre across the adventure whilst the bass has lips licking in excitement even just thinking about its lures. The brilliant proposition is matched by the just as insatiable tempting instrumental which follows, Mad City a foot to the metal juggernaut of toxic riffs and just as venomous grooves within a tempest of rhythmic and sonic charging. If you are aware of the equally addictive Buzzcocks track Late for the Train from Love Bites, you will understand the unrelenting potency of the track.

A mischievous nature adds to the raucous bellow of Ordinary Man next, the song another creatively stormy and exhaustingly fun rock ‘n’ roll romp matched by the excellent cover of The Beatles’ Helter Skelter, renamed Mater Skelter here. The Siouxsie and The Banshees version still holds the heart but Madre De Dios’ cover definitely gives it a run for its money at times, the band not twisting it around too much but still giving it their own spirited slant.

The album is completed by the stoner blues breathing Merry Go Round Song, a song which seems part Pearl Jam and part The Black Crowes, with a scent of Clutch but again finding something more to stand out, and lastly by the spatial adventure of Orbit. The final track seems to draw on all the flavours permeating album and sound so far, casting them all into its own individual escapade of eighties, nineties, and modern day rock ‘n’ roll. Like the album as a whole, it makes no demands and makes accessibility and enjoyment a done deal within the first handful of seconds, but as on all tracks it offers plenty of imagination and enterprise to be an intriguing and thrilling proposal at every turn.

If you want ground-breaking stuff, want to have your boundaries pushed into new realms, Madre De Dios will please to a certain extent but if you want rock music to leave you bloated on undiluted pleasure and fun then band and album is a must.

Madre De Dios is available on most digital music platforms and CD through Red Cat Promotion.