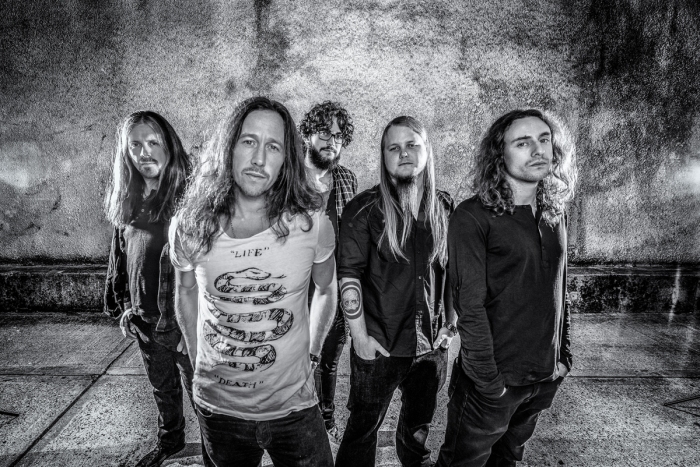 Anticipation for the successor to 2012 debut album Gravitas has been pretty much in top gear from almost the release day of that acclaimed success, and even more so after a four track cover mounted CD on Classic Rock Magazine UK last year, gave a very potent teaser for Furyon’s sophomore full-length. Now that Lost Salvation is upon us, it is fair to say that an already impressive and skilfully accomplished band has come of age, in sound, craft, and songwriting. Furyon is ready to stand with the big boys of classic rock and heavy metal, and show a few of them just how exciting rock ‘n’ roll is done.

Not being an instinctive fan of either heavy metal or classic rock, certainly of the more old-school styled offerings, we have demanding and probably unfair requirements and needs in order to be really impressed and even more so truly excited by a release but Furyon, as they did with their first album, succeed with ease. Again their songs upon Lost Salvation come with no excess baggage and are as hungry and at ease either forging big epic anthems or more intimately nurtured and designed propositions. This time though they feel like they come with more personal connections and inventiveness behind them; a new maturity to an already mature enterprise which is unafraid to explore broader essences of rock music within its core seeding. Produced by Rick Beato (Shinedown, Fozzy), Lost Salvation is Furyon’s aural masterpiece, but it still feels like just one more step in a continuing ascent; damn that anticipation is already kicking in again.

The album grips attention immediately, the tasty electronic infused opening of All That I Have inciting intrigue and appetite, especially once it blooms into a coaxing of riffs and firm rhythms with a delicious rich groove right through the middle. Relaxing a little as vocalist Matt Mitchell brings his fine delivery back to ears, the song seems to grow in weight and height with every subsequent chord and new flush of sound. It never explodes though, even in the chorus, just raising its temperature and intensity enough to enthral as the guitars of Luca Faraone, Tiago Rosado, and Chris Green, weave inventive designs. The song is the first anthem of the release, one as pungent and gripping as any peddle to the metal charge.

That kind of stampede comes with the album’s title track, the following Lost Salvation emerging as a thumping and contagious stomp which seamlessly blends vocal and sonic roars with predatory incitements, as well as a mystique woven solo which leaves lips licked and imagination lit. The dark tones of Alex Bowen’s bass go a long way to adding that sinister and intimidating edge to the song, backed by the sinew swung beats of Lee Farmery and a heavier growl of riffs from the guitars. This is anthem two and swiftly followed by the third in These Four Walls. To be

honest every song can be talked of in that way, even the more involved and exploratory tracks still holding that inescapable bait which has feet, neck muscles, and voice enlisted. The song is also partly a prowling croon, musically and vocally leaning heavily on the senses and emotions around more expressive crescendos. Maybe not as instant a persuasion as its predecessors, the song immerses ears and impresses more with every listen, leaving satisfaction brimming with pleasure.

The already in full flow invention and diversity makes another strong bow with the outstanding Scapegoat next, the track almost grouchy with heavy rock influences and grunge bred enterprise as it roams the psyche with its menacing rhythms and antagonistic riffs. Tempering its dark side though psychedelic rock like colours which ignite around the impressive tones of Mitchell, the song is a creative blaze to get happily lost within before Resurrect Me leads the listener into familiar Furyon territory with the kind of grooves and sonic adventure the band is renowned for. Flames of guitar invention are a persistent temptation to the band’s songs too and once more light up a not exactly startling, but definitely a thoroughly compelling slab of fiery rock ‘n ‘roll.

Left It with the Gods is another which maybe does not torch boundaries but definitely leaves ears and pleasure afire with its bellowing mixture of rock and metal whilst Good Sky calls in dark clouds and tempestuous intensity to leave thick pleasure in its wake. Epic in presence and tone, the track reaps some power metal tenacity with classic rock enterprise, as well as a slither of seventies metal spicing, moulding them in a potent roar which sets the appetite up for the excellent Dematerialize which casts its own dramatic shadows next. A far more intimate offering compared to its predecessor but also able to spread into a more expansive presence, the song bewitches with its blending of dark invention and sonic fire.

Lost Salvation is brought to a fine end by firstly the slowly strolling and richly grooved What You Need, a song suggesting an energy and anthemic potency to unite crowds in a live setting, and lastly the outstanding Wiseman. Again grooves and virulent riffs align to powerfully inciting rhythms and diversely delivered vocals, ensuring the album goes out on not only a bang but in a thought provoking tempest of invention.

The last growl of Lost Salvation is another of its loftier peaks, whilst the album itself is destined to be one of the classic rock pinnacles of 2015. It will take some special offerings to surpass it and convince our testing demands that is for sure.

Listen to the best independent music and artists on The RingMaster Review Radio Show and The Bone Orchard on Reputation Radio @  http://www.thereputationlabel.today