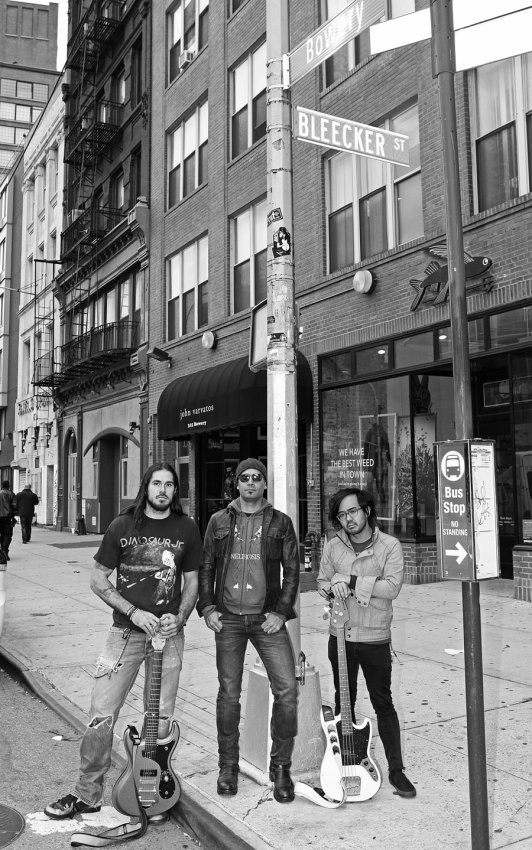 US noise breeders Fashion Week have a sound which is as scathing as it is caustic yet treats the listener like a king with regal melodies and provocative nuances within the ferocious encounters they call songs. As proven by new album Prêt-à-Porter, it is a striking and intimidating proposition but one that ears and emotions, certainly with the band’s fresh provocation, find hard to get enough of. The NYC trio prey on the senses, torment the psyche, and persistently inflame the imagination, whilst through Prêt-à-Porter provide one of the year’s most compelling releases so far.

Fashion Week consists of guitarist/vocalist Josh Lozano (Inswarm, Jarboe, Cobalt, Family), drummer Carl Eklof (Victory at Sea, Lidia Stone, Inswarm), and bassist Oscar Albis Rodriguez (A Great Big World, No Way, Nakatomi Plaza), and began its sonic explorations, if you go by the band’s bio, supposedly around the late 1980s. Three albums have been tucked under the band’s belts, though we can only find evidence beyond their words of the excellent EPs, Applicator (2011) and Coextinction #11 (2013), whilst and similarly again according to their bio, 1994 saw the death of Lozano, though this tragedy has been apparently followed by his ghost ripping up sounds and invention in bands like Family and Inswarm. There is a ripe confusion and humour to the band which certainly in the case of the latter, spreads to the music in many ways and adds to the fun of digging and exploring deep into debut album Prêt-à-Porter to reap all their inventive twists which come with the choicest rewards.

Opener Fendi Bender instantly treats ears to a sonic smooch before expelling a flavoursome blast of agitated rhythms and spicy riffs aligned to a delicious growl of a bass presence. A respite is in place as the clean tones of Lozano open up the lyrical narrative over those still highly tempting beats, a moment carrying a definite Nirvana-esque whiff to it. It is soon immersed in a wall of sonic hostility and vocal ferocity but gains a foothold again as the raw wave ebbs back readying itself for another intensive return. It is a captivating slice of diversely flavoured noise rock which swiftly has ears and appetite enlisted in the album’s potential and soon to be revealed addictive adventure.

Chorusace is the first to reinforce and feed that promise; its vocal sufferance an angst driven squall over transfixing rhythms and seductive grooves, both courted by just as magnetic shards of 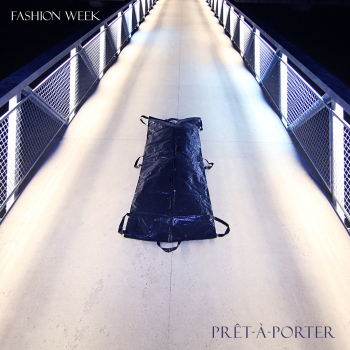 sonic ingenuity. Thoughts of Converge and Melvins come to mind during the track’s brief tenure, but also suggestions of the inventiveness of bands such as At the Drive In and Coilguns. It is the same with the excellent Meek is Miznabble which follows, the song’s beats and sonic tenacity, a maelstrom of unpredictable and furiously agitated ideation, though it too embraces a calmer and more relaxed passage of clean vocals and winey grooving.

The slow enticing of Summer Line keeps the fire of album and enjoyment burning next. The carnivorous tone of the bass is a thick instigator of the song’s prowling gait and oppressive shadows whilst Lozano’s guitar winds melodically around them with seductive tendencies. Again the eye of the storm moments of the provocation has a Cobain and co spicing whilst the tempestuous roar and corrosive brawl of the track is all Fashion Week designing.

The swinging sticks of Eklof provide a contagious trap as Fur Free Friday leaps into ears next, his inventive enticing an infectious lead into the melodic intrigue and creative maze of the song. Its sinews and bellow is not far from the surface though, expelling ire and antagonism within the magnetic landscape of the outstanding encounter.

The piano led Klosstrophobia explores a web of sound straight after; post and noise rock colluding with elements of death and post hardcore for an enthralling and intensive examination of songwriting and listener. It takes time to fully reveal its strengths, casting a slower persuasion compared to other songs but finding powerful success ultimately, which is not quite the same for “FASHION”=~S/(\$)/COLLAPSE/GSO. A patchwork of vocal samples over a mist of sonic distortion, the track is more an intro to the closing Haute Topic, though if not meant that way its intent was missed by our understanding. It is ok but easy to pass over after a couple of runs of the album foiled by the urge to dive into the triumph of Haute Topic. Grunge, noise, and melodic escapades all twist around each other for a thrilling and explosive conclusion to the album. It is the pinnacle of the release, helped further by the incendiary mixes of vocal delivery, sonic styles, and simply warped imagination, and almost alone gives the reason why Fashion Week should be on the catwalk of your attention.

Prêt-à-Porter is a treat which might take time to steal your ardour but eventually will become one of the year’s favourite events.

Listen to the best independent music and artists on The RingMaster Review Radio Show and The Bone Orchard on Reputation Radio @  http://www.thereputationlabel.today