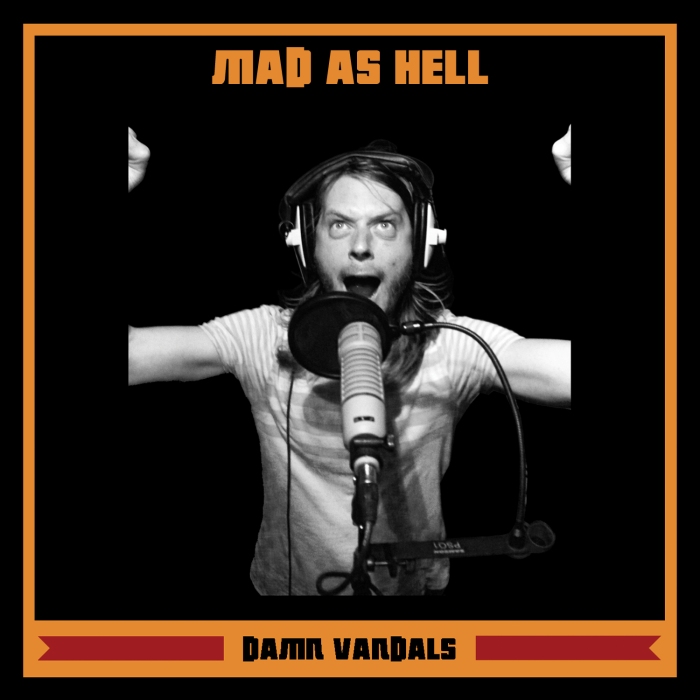 The British rock scene is not short on some rather exciting prospects and artists right now, bands which are stripping away its current landscape to create new primal and instinctively imaginative adventures. To the front of these propositions for the past few years, certainly since the release of their debut album Done For Desire in 2012 is Londoners Damn Vandals. They are the source of raw and aggressively inventive rock ‘n’ roll which seems to increase in virulence and creative rigour across every release, a success proven and reinforced once again by the band’s new single Mad As Hell. It is trade mark Damn Vandals yet again finds the band pushing new twists of sound and enterprise whilst providing another heady temptation into their warped sonic world for all newcomers.

Mad As Hell and its B-side, This Music Blows My Tiny Mind, both come from the band’s second album Rocket Out Of London, which as its predecessor was no stranger to widespread acclaim. In fact all Damn Vandal releases earn eager praise and it is hard not to suspect Mad As Hell doing the same. From an opening muscle bound grouchy bassline, the song has ears and attention firmly gripped ready for the distinctive and highly expressive tones of vocalist Jack Kansas. Just as swiftly his and Frank Pick’s guitars are weaving their flaming sonic seducing, a temptation ripe with spicy blues flavouring within a climate which shimmers and sizzles with melodic drama and fiery enterprise. Right away impressive on the album, the song has grown in stature and persuasive weight over time and now as a single, Mad As Hell sets the imagination and emotions sparking with pleasure. Within the embrace of the whole stunning full-length, its potency as a single initially might have been questioned but any doubts are soon tossed aside as the song revels in its spotlight proving that Rocket Out Of London in many ways is nothing but potential singles and essential slabs of rock ‘n’ roll.

The irresistible rhythmic frame of the single, cast by bassist Adam Kilemore Gardens and drummer Chris Christianson, is emulated in the equally contagious success of This Music Blows My Tiny Mind. Stretched sinews drive an even paced gait loaded with thick drum swipes and throaty bass riffs as vocals and guitars flirt with their caustic swagger. Littered with abrasing hooks and dirty melodies, the song is soon immersing ears into a unique tapestry of garage punk, psyche and raw punk with a stoner-esque tang, and swiftly infesting senses and psyche like a sonic virus. Charmingly psychotic and addictively feverish, the song is a creative brawl which again is only the strongest enticement into the ingenuity of Damn Vandals.

If you have yet to discover the quartet either Mad As Hell or This Music Blows My Tiny Mind provide a doorway to a theatre of original rock ‘n’ roll, and together make an inescapable sonic tempest. Though not labelled as such, the Julian Simmons (Midlake, Ed Sheeran, Guillemots, Goldheart Assembly) produced single is really a double A-sided offering in quality and striking impact, and proof that Damn Vandals still lead the current march of real rock ‘n’ roll.

Mad As Hell is released on 23rd February