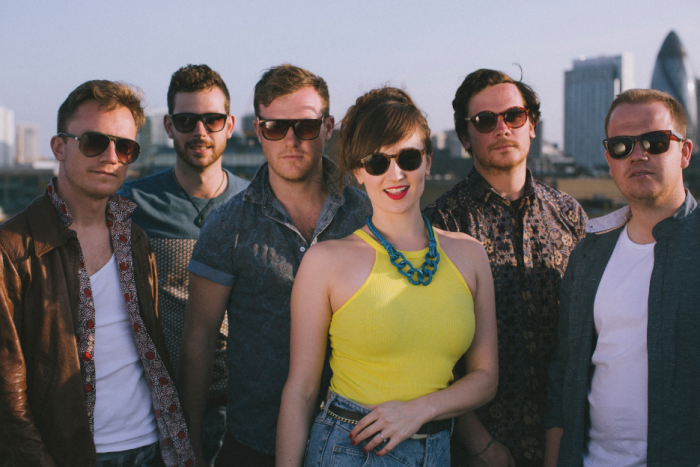 Back in the day, the UK was once under the spell of the South African kwela song Tom Hark. It was an encounter uncaged by The Piranhas which gripped the feet and bodies of a large chunk of the nation, an infectious scourge impossible to resist. Now the same kind of epidemic has been unleashed to infest the psyche and passions of the country again, only this time in comes in six insatiable devilments from London bred Cable Street Collective. Led by lead single Can’t Take Me Under, it alone an unscrupulous temptation, the band’s recently released debut EP The Best of Times is a decade of summers rolled into one addictive slice of worldly contagion, or as they call it, Carnival Pop.

Cable Street Collective formed in 2012, emerging at the same London open mic night that produced Denai Moore. With two of its members growing up in Swaziland and Malawi, inspirations and musical passions provide a varied weave from which the band’s dramatically compelling songs are bred. The same kwela influences which fuelled the success of the song from the Brighton band we first mentioned, finds an equally welcome home in the music of Cable Street Collective, but also do other rich flavours and styles from that part of the world alongside Latin enticements and more European bred spices from funk to ska, indie pop to swing, and that is still to peel all the layers from their music. Drawing acclaim with their energetic performances at festivals such as Bestival, Secret Garden Party, Boomtown Fair, and the Lake of Stars Festival in Malawi, the band has been laying down a trail of creative revelry since forming, one coming to its first gripping crescendo in The Best of Times.

The opening twenty second Intro is just a searching of a radio dial to find some flavoursome sounds, a success coming with the sultry sway of Wasted Hours which sidles up to ears in a seductive manner. The instantly magnetic vocals of Fiona Jane cast a warm welcome, an invitation matched by the throaty tones of the bass and the holiday flirtation of the guitars. Rhythms and

beats energetically pop across the bubbly landscape thereafter as a dynamic revelry begins busying itself. Just as you get a handle on things and hips prepare to swing though, a great unpredictable mischief wrong-foots expectations. It is a brief and pleasing detour which returns again from time to time, but mere moments in a track which is soon back into its refreshing and magnetic shuffle as Fiona almost siren like incites the melodic temptation around her.

It only takes that one song, certainly here to be bound and enslaved by band and release, but to make sure escape is not an option, He’s on Fire erupts next with a thick rockabilly snarl of guitar. Rhythms are swiftly adding their tenacious bait, the bass especially virulent alongside just as dramatically alluring vocals. A song to bring the tenants of cemeteries to rigorous festive life, it is a rhythmic maelstrom complete with an addiction breeding melodic hex and vocals which stir up the devilry like a harmonic carnival barker.

Yin & Prang has a tangy ska like rascality to its kwela sculpted merriment whilst the twining of female and male vocals adds another great twist to an already individual romp. The bass once again lays down a delicious dark throated coaxing over which percussive adventure and diversity relishes its freedom, gripping bodies like a puppeteer as melodies and riffs spark with firework intensity across the mouth-watering escapade.

The sultry seventies funk kissed Interlude (Feel It Fall Apart) bridges its predecessor and the following Can’t Take Me Under, the pulsating instrumental a cauldron of feistily simmering magnetism. Seamlessly slipping out of its climactic heat, the new single sways its rhythmic hips under the song’s virulently smiling melodic enterprise. There is also a slight punkish edge to its character, the track coming over like a tasty mix of Sonic Boom Six and Molotov Jukebox whilst entertaining a wealth of other styles and essences in its infectious alchemy.

The EP is brought to a thrilling end by Two Cities, a more indie pop lined offering with a Holly Walker essence to the vocal and lyrical character of the song. Lyrically across the whole release, the band is just as vivacious and colourful, numerous lines and picture-esque word crafted scenes making their own flirtatious and memorable contributions to the breath-taking encounter.

The Best of Times is a festival in the ears and a party in the emotions, and one of the most riotously thrilling proposals likely to be enjoyed this year. Cable Street Collective is edging to be our new favourite band, more offerings like this and it will be a done deal.

The Best of Times EP is available on iTunes @ https://itunes.apple.com/gb/album/the-best-of-times/id942762566 and as a physical release now @ http://www.cablestreetcollective.co.uk/?product=best-of-times-album whilst new single Can’t Take Me Under is available from February 16th again through iTunes.