They can try to call it groove metal, progressive metal maybe, or even avant-garde death metal, but quite simply the Damballa’s Voodoo Doll EP is swing metal in all its fresh faced glory. The six track dance of voracious metal rabidity and ridiculously virulent contagion is the new hex cast by French metallers Trepalium, a band no strangers to unleashing some of the most blistering and imagination stretching extreme metal over the past decade. French metal is in the midst of an innovative heyday right now, with seemingly every corner offering a new proposition to devour. It is also producing some of the most startlingly inventive proposals, unique experimental /avant-garde offerings from the likes of 6:33 and Carnival in Coal through to Pryapsime, Hardcore Anal Hydrogen, and Toumaï. One of the most rabid and nastily inventive of them all is Trepalium and their death metal bred sonic pestilence.

The band across four albums has persistently pushed their and metal’s boundaries with a raw hunger to infest viciousness with a seductive multi-flavoured originality, an intent bearing the most compelling fruit on Damballa’s Voodoo Doll. Cloaked in the allure of arcane mysticism and bursting with the tenacity and energy of vintage New Orleans jazz and swing, the EP is a nonstop stomp through fiercely grasping shadows and insidious black-hearted temptations, commanding feet and emotions like a maniacal puppeteer.

Voodoo Moonshine sets the sorcery in motion, a violent barroom the scene for big imposing and alluring beats to tone up ears and appetite ready for the salacious flames of brass and the throaty vocal malevolence of Cédric ‘KK’ Punda. His tones, as the music comes with a swagger, a demonic confidence which even in short grunts has intimidation and temptation dripping from every sound. The guitars of Harun Demiraslan and Nicolas Amossé are soon spinning a web of grooves and swing induced revelry, every flirtation and melodic toxin embraced in the rhythmic contagion of bassist Ludovic Chauveau and drummer Sylvain Bouvier. Embraced in the seductive heat of a full complement of brass and caressing keys, the track is a festival of sound and creative devilment, like a brawling romance between Gojira and Cherry Poppin’ Daddies with Destrage and Mucho Tapioca in close attention to give some hint of its infectious alchemy.

Talking of the first of those bands, Gojira’s Joseph Duplantier appears on the following title track, another taking a mere breath to enthral with its swinging 30’s big band 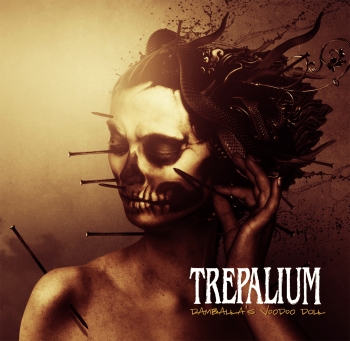 like entrance clad in a just as immediately imposing and ferocious but catchy aggression. As in its predecessor, grooves bind and vein the track like vines, creeping deep into the passions and psyche as keys conjure their own individual demons. Imagination and emotions are just as swiftly inflamed by the villainous tapestry of sound, every unpredictable note and twist as well as boozy growl, an epidemic of incitement, though it is soon over run by the dark majesty of Possessed by the Nightlife. Twenties seeded keys paint the landscape before beats and riffs prowl and lurch up on the senses, their danger and menace as inescapable as the anthemic bait provided by the increasingly punchy rhythms. The song is brutal and uncompromising. from the pestilential tone of the bass to the barbarous predation of the guitars a merciless threat but again pure viral addiction leaving feet exhausted and thoughts ignited.

Guédé Juice provides its own enslaving irreverence next, rhythmic swings and acidic grooves the frame to dirty jazz colours and a feverishly sultry climate of enterprise and creative rapacity. By the end of the song exhaustion and bliss are in overload and the spell keeps being casted as Fire on Skin broodily appears. Offering an opening impression or certainly the spark to thoughts of Creole like prohibition and dark magic in an embrace of the Dirty Thirties, the track is a muggy affair initially before the fetid mists part and the band bursts through with a metal driven rampage. Still employing eruptions of jazz endeavour, the track roars and bellows with extreme metal hostility and melodic rock enterprise, though it is a devious savaging as again there is a swing to much of its intensity and a venom which simply seduces body and soul.

Damballa’s Voodoo Doll is dangerous; it is bad for the health of the body with its ridiculously infectious tempting and lethal for the psyche with its serpentine seduction and mystique. Ultimately though, the EP is one of the most exhilarating and lustful things likely to be heard this year, the next, or whilst the sun still warms our souls.