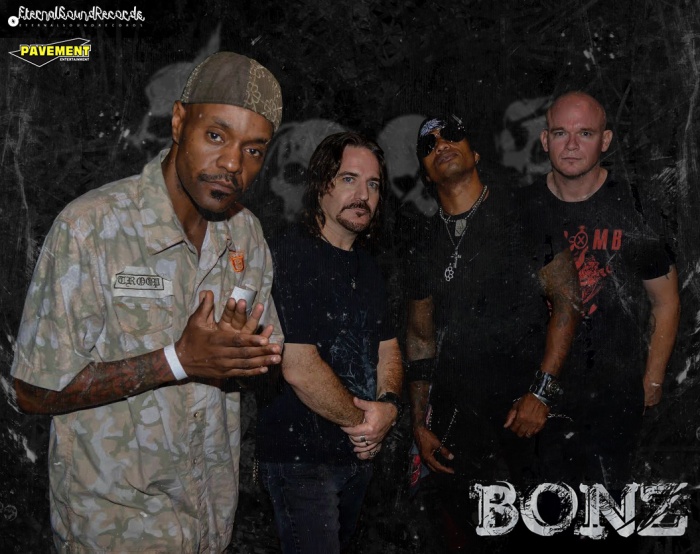 With Stuck Mojo deeply entrenched in the passions maybe it is no surprise that Broken Silence, the debut album from BONZ, immediately felt like an old friend returning to stir up trouble and the passions. Led by the original frontman of the former, and welcomingly dosed with all the recognisable tones, raps, and roars vocalist Bonz offered in the major protagonists sculpting and ferociously driving rap metal forward, band and album swiftly set a lively spark in the passions. Around him though the sounds offer plenty more than an echo of former glories; twisting rap, nu, and southern bred groove metal into one riveting and ridiculously contagious proposition. Think Stuck Mojo, Body Count, and (Hed) PE in a passionate collusion with The Union Underground and you get a colour of the creative blaze of BONZ. It is familiar in many ways but still dramatically fresh and best of all, ridiculously anthemic and instinctively compelling.

The band came about after Bonz played with ex-Primer 55 guitarist/bassist Curt Taylor in Killer in the Workplace in 2009. With the band coming to an end in 2011, the pair wanted to continue working together and BONZ was the outcome. Early demos suggested something tasty was brewing, a realisation now openly unleashed on the world through Broken Silence. Last year saw the band sign with Germany’s Eternal Sound Records and the creating of the band’s imposing full-length debut, showing in the words of their bio that “the “Mouth of Mojo” is indeed back in fine form.”

If any album in recent times has started with as potent and irresistible a stomp as Broken Silence we missed it. Opener Sinister Grin is pure virulence, from the wonderful earthy lone bassline which sets it in motion, the song is the seeds to addiction. It is almost rockabilly in tone at the start but just the simple lure into the furnace of rap metal tenacity which explodes upon the listener soon after. Grooves are as immediate in appearance and captivation as the distinctive provocations of Bonz, their united bait framed by the punchy rhythmic trap laid by drums and bass. Body and thoughts are increasingly seduced as the track romps with anthemic fury and enterprise, every lyrical spit and tangy hook the inescapable kindling to a fiery ardour for the punk infested 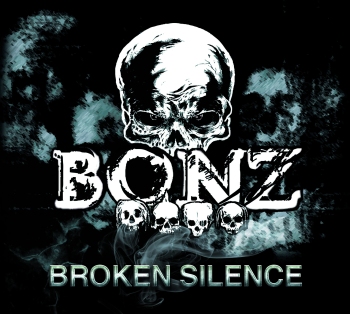 Such a powerful gripping entrance was bound to be followed by a slight dip, not that Comes Over Me gives it much room to breed with its mustier breath and heavier rock infused protestation. Slim but strong diversity from the vocals adds to its inviting drama whilst the guitars scrub up a great dusty atmosphere to the riled encounter. It keeps the potency of the album high as does the excellent Godshine which follows. A thick vine of southern rock flaming veins the track, infusing the stormy attitude and intensity of the encounter with a sonic colour which flames nicely against the infectious vocal conflict.

The album’s title track like the opener is baiting and binding ears and imagination within seconds, this time with another delicious toxic groove which is belligerently unrelenting in its persistence. It cores the track from start to finish, shifting its shade of colour only as Bonz almost duels vocally with the listener. The rhythmic stomp of the track is just as gripping and incendiary, beats punching ears with a middleweight’s consistency and accuracy as bass and guitar prowl and flirt respectively. There is no denying you cannot escape the Stuck Mojo comparisons but it is hard to remember that band finding the same depth of swagger and epidemic like temptation in as many songs on a single release as already shown upon Broken Silence.

30 Seconds To Swat is a punk metal brawl, the bass providing a dirty groove whilst riffs blister and inflame the air with a budding fury. Not as unique as other tracks but a thoroughly absorbing incitement to neck muscles, the song makes way for the exceptional stalking that is Take It Personal. Bass and riffs prowl around the listener, leery and combat ready. They do step back for the rap of Bonz though, the bass accompanying his vocal contention as beats equally slow their assault. It is going to erupt at some point of course and does in the ridiculously addictive chorus which has voice engaged in its call within one round of its rivalry. The track sets another pinnacle in the heady heights of the album, easily sparking thoughts that if live audiences bellow for one song it would be this mighty antagonist.

There is enough diversity to the album to make Broken Silence more than a rap metal revival, the great melodic charm and chant of Sour Diesel teasing with a bluesy groove and Insane Clown Posse like vocal sway whilst Bad News stamps and seduces with a feisty fusion of hard and melodic rock. Jared Gomes and Co come to mind during the song but equally a loud whisper of P.O.D. shows itself, both mere spices to the rock ‘n’ roll roar. Their pleasing successes are surpassed by the great punk causticity and dirty rock ‘n’ roll bellow of Bad Love, where essences of hardcore and melodically infested rapcore collide within the furious climate of the song.

Completed by a great live version of Take It Personal, it is easy to suggest Broken Silence will be sheer joy for fans of rap and nu metal, and for sure those of Stuck Mojo even as BONZ unravel their own identity with their debut. If you are looking for flaws, maybe not enough striking diversity to the delivery of Bonz could be offered, though why change something which works, and surprisingly the release never gets as nasty and spiteful in its anger as expected. When it is this much fun and thrilling though, it simply does not matter.