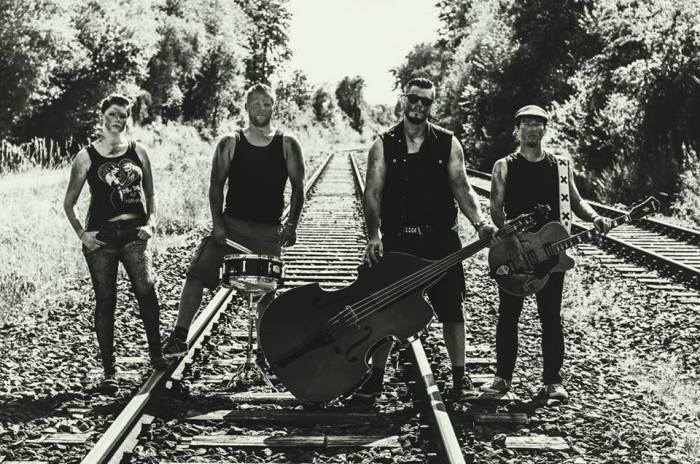 It is hard to miss the buzz emerging around German band The Bloodstrings, especially after the release of debut album Coal-Black Heart. Now having been infected by its seriously accomplished and salacious mix of horror punk, psychobilly, and just plain old dirty rock ‘n’ roll, it is easy to see why. With a sound which is again more than the brief description above, the Aachen/Stolberg hailing quartet is beginning to kick up a storm which their album’s CD release via British indie Undead Artists can only accelerate.

Formed in 2009 and consisting of the seductive yet predatory tones of vocalist /guitarist Celina, the thumping beats of drummer Festus, the predatory bass slaps of Doctor Nick, and the melodic toxicity offered by lead guitarist Krösus, The Bloodstrings have a bloodlust to, and horror driven imagination in their songs which leaves ears and emotions only wanting more. Coal-Black Heart is contagious proof of this seductive quality and of the anthemic voracity which steals the resistance of limbs and energies with consummate ease.

The End Of It All is the first to explode from the album, its initial sonic yawn evolving into a rigorous shuffle of crisply delivered beats and tangy grooves all around an infectious rockabilly riffing. With the fine voice of Celina beckoning with every alluring syllable, as do her skills with keys, the song is soon leaving expectations behind as it sculpts a tasty bait of spicy melodies on the way to a slower more salacious swing for its finale. It is a magnetic start surpassed by the raucous swagger and enterprise of the outstanding Better Drop Dead, a song which romps like a mix of Horrorpops and Midnight Mob. It is an instant anthem for ears and feet to enlist in, and with highly flavoursome endeavour from Krösus across its contagion soon after, has the passions fully entwined.

Both Cannibal and Skeleton bring fresh and infectious devilment to the party, the first merging melodic and classic rock essences into its horror punk tenacity whilst the second unleashes a 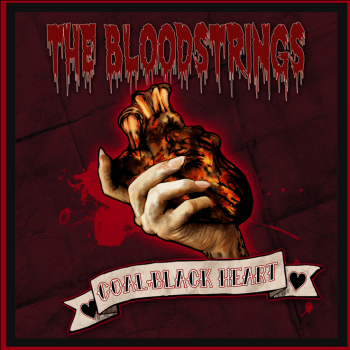 rhythmic jungle of temptation courted by a just as compelling bassline. Both tracks draw their share of limb and voice activity, especially the latter with its psychobilly theatre and virulent magnetism. Once again vocals and guitar endeavour bring juicy and captivating colour to both romps before the pair makes way for the prowling predatory charm of Stalker. A hint of Guana Batz spices the song’s entrance before everything turns into a menacing and fiery blaze of melodic and sonic drama, with group vocals calls to match.

By this point band and album have done all the convincing needed to recommend its toxic glory, but does itself only further good with the wholly satisfying rampancy of In Love With A Monster, which has a great air of Spanish horror punks The Monster Ones to it, and the pungent rhythmic stamp of Devils Wine with its web of sonic and melodic liquor. The two tracks in their different guises both have feet pounding upon the floor and blood coursing just that faster through veins, a success taken to greater heights by the metal lined Soul Eaters. Steering through ears on a wave of feistily rolling beats and vocal tempting, the song proceeds to entertain melodic metal vivacity through the guitars and bruising punk metal voracity in its turbulent tempest of a body.

Any Last Words comes forward next with a delicious musical and vocal croon to ignite any graveyard and death stalked romance. Its smooch though is just the first step to a bedlamic rampage, riffs and rhythms a flurry of aggression and gripping attitude bound in mesmeric flames of melodic invention and the dark seduction of Celina’s voice. Revolving through the calm and stormy passages a couple of times, the song sets itself up as another best song contender and a long-term romance for the passions.

Der Nebel Steigt with its traditional Germanic whispers and narrative lights ears next, the lack of lyrical understanding easily compensated by the hypnotic dance of rhythms and the tender yet lively addictive caresses of the guitars. The similarly potent resonating slaps of the bass do it no harm either nor the exceptional riot of Til Death Is Coming which bursts in right after. Thoughts of The Creepshow show themselves in the strenuous blues kissed rock ‘n’ roll side of the song whilst its punkier elements has a feel of dragSTER to their insatiable enticements, the result being yet another irresistible and thumping treat.

The album’s title track has a surf and dark country feel to its melodic and atmospheric climate, a bewitching sultriness which sparks the imagination as potently as the sounds excite ears. A pleasure continued in the closing Digging Our Graves which ensures Coal-Black Heart leaves on a final hellacious furore of sound and energy. Anthems on the album or indeed horror punk/psychobilly do not come more feverish and voracious than with the last fury of adventure.

Coal-Black Heart is an encounter which leaves ears ringing, energies breathless, and satisfaction brimming over. It might not be quite a classic but The Bloodstrings ensures that few storms of rock ‘n’ roll revelry will surpass it in passion and instinctive persuasion this year on their way to creating that future major triumph you can just feel brewing up inside them.

Coal-Black Heart is available digitally and on CD via Undead Artists @ http://undeadartists.bandcamp.com/album/coal-black-heart