Ever had those nightmares which feel so alive that they are virtually stalking thoughts and sanity? If so then you will recognise those same menacing traits in One Eon, the new album from Finnish metallers 0 X í S T. Exploring even richer, more dangerous territory than on their acclaimed debut full-length Nil, the Riihimäki hailing quartet has turned their already oppressive dark metal into a new inescapable predator. Every one of the new album’s six tracks preys on the listener’s fears, escorting them into the darkest corners of mind and soul but with the resourceful craft and startling imagination which the band is already renowned for.

Formed in 2008, 0 X í S T (pronounced zero exist) was soon setting about creating intense and dramatic sounds inspired by essences to be found in bands such as Triptykon, Celtic Frost, Ajattara, and Deinonychus, the first broad invitation to which came with first EP Unveiling the Shadow World via Ostra Records in 2010. The release was followed by the band’s venture in the live arena, quickly taking in successful shows across southern Finland and Estonia. An extremely limited edition CDr two track demo followed as the band began working on Nil, its teasing the appetiser and taster to the subsequent seven track album. Again out through Ostra Records, the band’s first full-length was the spark to a much stronger spotlight upon the band, as was the wealth of live shows which followed taking in furthers countries such as Belgium, France, Germany, Holland, Latvia, Lithuania, Sweden, and Poland.

Recorded last year and now self-released on Death Shrine Offerings, One Eon is the next gripping step in world metal of 0 X í S T’s slowly invasive and absorbing dark metal. It is a proposition which in many ways continues where its predecessor left off but goes far deeper and further into the creative and malevolent depths of the band. The evidence is immediate with opener In the Hood of the Clan of Tombs. Its opening embrace of sonic tempting instantly has a welcoming yet toxic tone to its lure, the guitars of Jani Koskela and Juhani Jokisalo swiftly sharing an intimidating leer in their melodic coaxing. As expected it is a slow enclosing of ears and senses, given weightier substance and menace by the slow lumbering riff of bassist Sameli Köykkä matched by the restrained but intensely premeditated swings of drummer Mikael Ahlstén. The song is a crawling intrusion with vocals to match, but bound in increasingly seductive and unpredictable sonic grooves and creative taunting giving an invigorating nature to its insidious character. 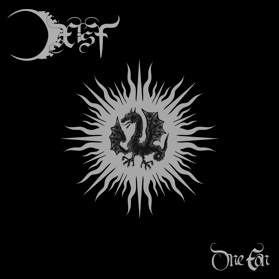 The excellent track continues to twist and flex its animosity with compelling and inventive enterprise, seducing and ravaging the senses before making way for Enshrine which is straight away emulating the success and inhospitality of its predecessor through its own ravenous embrace. Without lumbering into a doom bred gait, the track is unhurried in its overwhelming of ears, almost finding a swagger to its creeping intent and aural consumption along the way, especially when slipping into a bewitching melodic passage with a great mix of blackened and heavy throated vocals. Soon back into its darkest cavernous depths though, the track bruises, seduces, and suffocates the senses and imagination for another thrilling trespass of the listener.

Neither the following Conclusion nor Instincts of a Serpent can find the same heights of the first pair of songs, though both explore riveting new creative journeys to devour heartily. Cleaner vocals are brought into both alongside the raw caustic growls, working well enough but soaked in a little too much theatre maybe for personal tastes. It is a minor personal niggle though as, like in the first of the songs, a delicious melodic endeavour from guitars tempers its ferocious and rabid nature to enthral and inspire thoughts. It’s successor has an almost leech like touch, wrapping its treacherous tendrils of sound and narrative firmly to the psyche whilst leaving body and emotions captivated and fearful of the song’s increasingly blackening touch.

Leaving no Prospect for a New Dawn takes best track honours next, the bestial roar and creative causticity of its proposal an unrelenting stalking. To its determined rancorous intent though a sonic and melodic charm binds the fears and wounds bred, as in most tracks providing a balm to the overwhelming and intoxicating animus fuelling the encounter. The track is engrossing leaving closing song No Life to Bother a challenge to match up against, which it does with its own smog of lumbering rhythms and towering shadows veined by a contrasting merger of sonic predation and melodic seducing. Enticingly tempestuous with its own sobering and villainous cavern of antipathy, the song brings a fine album to an impressive end.

Having an increasingly deeper rooted soft spot for Nil, it is in some ways hard for One Eon to match up to the first 0 X í S T album for us. Openly though, there is an exciting new exploration to the band’s sound which brought with their open technical skills and intensive imagination, ensures it is going to be one of the most fascinating and satisfying propositions you will hear this year.

Since the recording of One Eon, original bassist Ossi Leino, who played on Nil, has returned to 0 X í S T after the departure of Köykkä.

One Eon is available digitally and on CD from February 4th @ http://0xist.bandcamp.com/album/one-eon