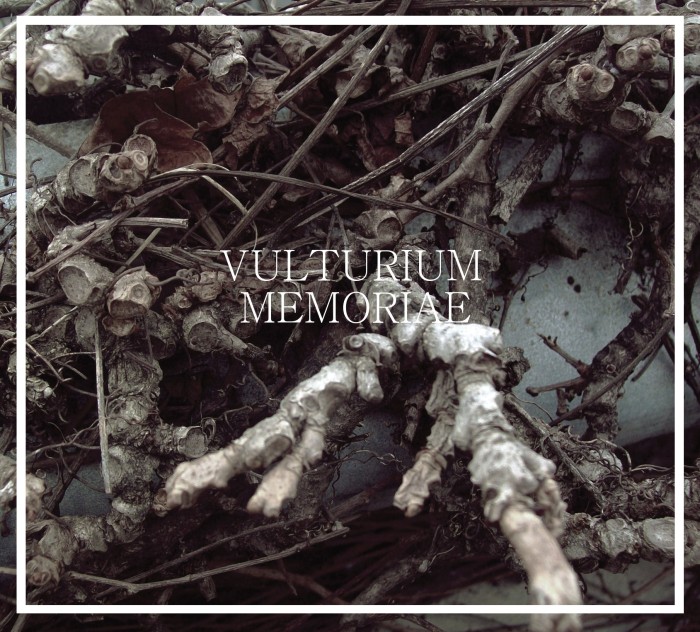 Dark shadows and melancholic immersions can be quite meditative, certainly in the hands of Vulturium Memoriae. This is exactly what the one man project of Italian musician/composer Mirg reveals with new album Nato per ragioni ignote, which translates as “born for unknown reasons”. Consisting of six simultaneously mesmeric and oppressive landscapes converging into one epic soundscape of emotively intense instrumental exploration, the album is a fascinating and at times breath-taking encounter. Creating a haunting and proposition for ears and thoughts, not forgetting emotions, cast in a weave of sound seeded in dark wave /post black metal ambiences, the release is as intimidating as it is seductive and perpetually a compelling flight for thoughts to ruminate and get lost in.

Each track upon Nato per ragioni ignote is fuelled by repetition and tides of melancholia, yet at no point from opener Dissolvenza della ragione onwards does it become a doom clad drone or lack a light kissed tempering to the brooding darkness explored. The first track looms with an urgency which is never quite repeated throughout the song and release again. It is a hectic sonic and almost bedlamic start which provides the springboard for a slowly turning sonic and emotional contemplation with a just as swiftly emerging nag of heavy restrained beats and smouldering shards of acidic guitar expression that engulfs senses and imagination with equally strong persuasion. Already though there are numerous levels and textures to the piece, a great bass prowl tempering the sharp touch of the guitars but enhancing the heavy intimidating air of the track.

Its sink into cavernous darkness cultured emotions is given a new shade of colour and angst by the similarly languid yet stirring embrace of Onde psichiche di coscienza. For almost twelve minutes the track permeates every thought and emotion with its psyche challenging sonic and rhythmic iteration and for the same time it enthrals and lures the listener into their own cornered off shadows. Sonically lighter in tone but no less a potently simmering trespass, the track bewitches and intrudes before Miraggio attraverso i ricordi steps up with its arguably calmer emotional distress. As in all pieces of music, you feel yourself floating across or falling into the jaws and clutches of places you maybe wish to avoid with rewards which only invigorate and fascinate. Carrying a greater noir clad danger and threat than its predecessors, the track is wonderfully cinematic and gloriously epic in its breath, Mirg creating smog of absorbing invention and emotional provocation over a surprisingly understanding drum machine spawned bait of rhythms.

The album’s title track seduces next, its brief presence, in comparison to other songs, a radiant soar across more gentle and eerily romantic terrains before drifting away into the following and scintillating Grigiore a cielo aperto and its heavier, darker, more unearthly scenery of blackened musings. The most suffocating track on the album, it is equally the most invigorating physically and emotionally, its every imposing twitch and scorching tendril a transfixing narrative to explore and interpret.

The release closes with the morose drift of Lungo l’orizzonte dell’addio, a piece which seemingly floats across the senses but leaves barbed hooks and startling abrasions to linger in ears and thoughts long after its departure. It is an immense end to a ravishing sonic incitement, a release which leaves scars as it ignites every aspect of the listener.

In some ways the album is easier to listen to as individual tracks or in stages but this does lose the towering impact and effect of the encounter, so be brave and let Nato per ragioni ignote take you to places inside even angels fear to tread.

Nato per ragioni ignote is available now via Avantgarde Music digitally and on CD @ http://avantgardemusic.bandcamp.com/album/nato-per-ragioni-ignote