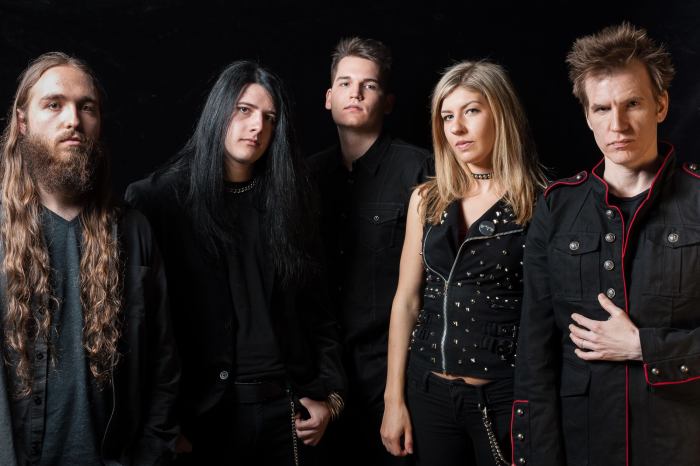 Over a decade since their last foray into ears and imagination, Sweden/American metallers Armageddon return with new album Captivity and Devourment, their most compelling and fascinating work to date. As to its strength against the band’s previous albums, that will be down to the individual and their appetite for the different stages of the continually evolving and exploratory invention of the band, but it is a creativity imposing and magnetic proposition which even when its persuasion ebbs a touch simply enthrals and when in complete tantalising majesty is a sonic masterpiece.

Formed in 1997 as a studio project by then Arch Enemy guitarist Christopher Amott, the Halmstad hailing project swiftly grip attention and fevered support with the release of cult album Crossing the Rubicon that same year. A sci-fi themed concept album, its lure and success was followed by the potent presences of Embrace the Mystery and Three of 2000 and 2003 respectively. Each release saw new line-ups in their individual persuasions and a shift from the bands initial melodic death metal explorations into power metal coloured landscapes. With another new line-up alongside Amott and a fresh creative emprise across technical and heavy melodic metal pastures, the now New York City based band and their album turn on ears and imagination to Armageddon once again with a bewitching tempest of emotion and sonic intrigue.

The album’s title track explodes in ears first, grooves and riffs an instantly virulent savaging as a hellacious rhythmic assault keeps pace with the track’s ferocious yet infectious start. The guitars of 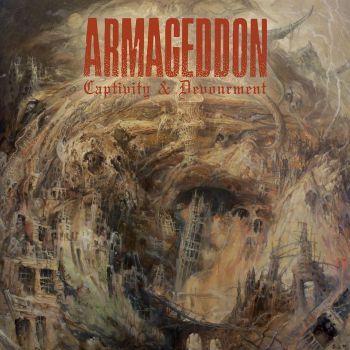 Amott and Joey Concepcion swiftly cast a web of melodic and technical temptation as the raw caustic tones of vocalist Matt Hallquist abrase with varied and potent hostility. It is an impressive and gripping start to Captivity & Devourment, the dark hearted basslines of Sara Claudius and the unrelenting and creative swings of drummer Márton Veress adding antagonistic depths and appealing shadows to the dominant lure of grooves and the sonic ingenuity. Technically in craft and invention, song and band fascinate and seduce; the theatre of the song, as in most tracks, providing inescapable persuasion alone.

The great start is backed up if not quite matched by Locked In next, the portentous emergence of the encounter the appetiser to scenery of blackened malevolence courtesy of the vocals within a sonic tapestry of melodies and emotive colour. Carrying a classic heavy metal air at times, the track flirts and entices with every wash of melodies and bait of restrained rhythms with only the again caustic and this time not so adventurous squalls of Hallquist a tempering factor. It is enough though to accentuate the missing spark in the song compared to its predecessor, and the indefinable but prevalent essence which ignites the following Rendition. The third track, as the first, is a colossal beast in ears and attention within its first breath. The vocals are back on diverse form and riffs a rampant predation as they unite with the just as brutal rhythmic provocation. It is a formidable and addictive intimidation which finds a new plateau with the burst of impressive clean vocals from Amott and his subsequent tendrils of breath-taking sonic invention. The song is magnificent, everything about it as engrossing and seductive as it is venomously inhospitable, every flaming groove, unpredictable twist, and barbed hook a theatre of ingenuity and passion sculpting a canvas for body and emotions to greedily immerse in.

Its epic persuasion though casts a shadow which neither Fugitive Dust nor Conquer can evade next, though each provides plenty to keep an already potent appetite for the release satisfied. The first of the two rumbles with a great throaty bass threat from Claudius as guitars again burn air and sear the senses. Again though the vocals of Hallquist reveal little enterprise, certainly in comparison to the previous song, and dampened the seventies psych rock and progressive climate of the encounter. Its successor challenges and assaults with another breed of toxically enchanting and malicious intent where this time vocals find that enjoyable and inventive extra as they help enhance the internal conflict of the track where rage and melodic seduction entwine like creative lovers. The relatively short but exciting track makes way for the masterful drama of Thanatron. A gorgeous opening of acoustic guitar beauty swiftly has ears and emotions enthralled, and still tightly gripped as riffs and rhythms emerge from within its light to prowl and stalk the psyche. Equipped with seriously addictive grooves and scythes of melodic tempting, the song simultaneously bullies as it spellbinds, another incitement where every predacious shadow and melodic coaxing comes with thick virulence.

One triumph leads into the instrumental beauty of another, Background Radiation a warm yet haunting caress casting its own sublime provocative spell before making way for the scintillating and epically weighted grandeur of The Watcher. Brutal rhythms and riff driven scourges assault the senses with rapacious tenacity but have to submit to the welcome return of the clean vocal flames which erupt within the tempestuous soundscape. It is another mouth-watering tsunami of invention and craft which seems to grow broader and more impressive with every listen, just like next up Equalizer with its cantankerous threat of sinew sculpting rhythms and melodic exploration. Dipping into a mix of progressive and heavy metal, power and folk seeded enterprise, the track also captivates without restraint even though the viciousness it offers is held down by the warmth elsewhere in comparison to the absorbing turmoil of the last track.

Completed by Giants, though the CD version of the album has bonus track Stone Worker included, Captivity and Devourment is an invigorating confrontation and temptation. The last song is another missing that final intangible ingredient which turns great songs into insatiable treats within the album, but it is still a fine end to a release that can only be heartily recommended. As we said previously, you can expect differing views and tastes when comparing the might of the album against Armageddon’s previous offerings, such their open uniqueness to each other, but for us it has to be seriously considered as maybe their finest moment.

Captivity and Devourment is available from January 26th via Listenable Records @ http://www.shop.listenable.net/fr/143_armageddon