Two years on from their acclaimed second album Horizontal Life, British heavy blues metallers Desert Storm unleash a new cauldron of ridiculously addictive temptation in the ravishing shape of Omniscient. Before listening to the new release we would have been ecstatic to announce that the album was an equal to its brilliant predecessor. But it is not; just like the last album was a fascinating and thrilling step forward from the band’s outstanding debut full-length Forked Tongue, the glorious Omniscient is a leap to new plateaus. Everything about the encounter is a gripping evolution of adventure and maturity; riffs are dirtier, grooves keener edged, and it has a contagion which borders on slavery, all without losing any of the blistering uniqueness and raw power which has always soaked Desert Storm’s sonic invention.

Where many similarly styled bands seem like servants to the riff, in that it predominantly consumes their songwriting, Desert Storm enslave that feature of their sound and twist it into a web of just as forceful and potent grooved and melodic exploration. As proven by their previous album it means each track has a distinct character and creative emprise of its own, and in Omniscient all songs come from an even broader canvas of imagination and craft. Since forming in 2007, the Oxford quintet has challenged and lit ears right through to the passions with their persistently gripping releases. Equally they have earned a formidable reputation for their live presence through shows and tours with the likes of Karma To Burn, Nashville Pussy, Peter Pan Speedrock, Honky (ft. members of Down/Melvins/Butthole Surfers), Orange Goblin, Red Fang, and American Head Charge, not forgetting igniting festivals like The Bulldog Bash, The Desertfest, Brisfest, and Roadkill. Their stature and reputation already goes before them but now with Omniscient global recognition and spotlight has to be on the cards.

The band’s fans are sure to break into a broad smile as opener Outlander instantly collides with ears through excited rhythms and imposing riffs. As spicy grooves swiftly join the revelry it is prime Desert Storm psych blues flavouring, intent on seducing senses and imagination with concussive beats and intoxicating sonic temptation. Already there is a sense of new adventure though, 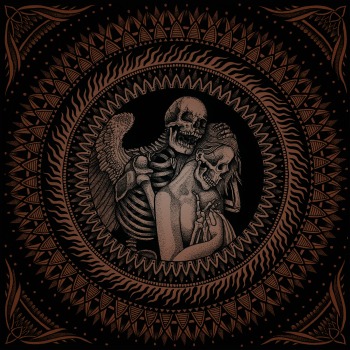 background melodies and atmospheres adding their suggestiveness as vocalist Matt Ryan roars. His voice is as bracing and gruffly coated as ever but also seemingly carried on a new clarity and variety. As expected it is impossible to escape the lures of guitarists Chris White and Ryan Cole or their weave of sinew driven riffs and toxic grooving, every note spilling temptation and virulence to match the similarly seductive dark throated tones of Chris Benoist’s bass and the anthemic heavy footed swipes of drummer Elliot Cole. It is an enthralling and incendiary start to the album, body and emotions already aflame from its creative bait and blues spirit.

The following more predatory Queen Reefer is just as irresistible. The source of the band’s new video, it is a ruggedly charming temptress with bulging beats and acidic invention. Far heavier and threatening compared to its more devilish predecessor, it casts a darker more volatile demonic air in its breath around a corrosive touch. In saying that though, the song is still irresistibly catchy and commanding, and with a mesmeric slip into a gentle embrace of expressive melodies and low key drama cast by guitars and bass at one point, mouth-wateringly adventurous.

Horizon continues to spread thick almost doomy textures of intensity and emotion next, drums creating a clash of percussive disorientation which only adds to the power of Elliot’s swings and the tangy blues grooving binding song and senses. It is just one part of the track’s scenery though as halfway it explodes into an explosive rhythmic tango which in turn seems to incite greater energy and venom to flush through the brawl of vocals and sonic enterprise. The track never quite ignites into the fury you suspect it might but is the better for it, the relative restraint adding to the dramatic tension of the song, a scintillating theatre which again turns Sway of The Tides into a battlefield of hostility and contagion, and Home into a folk ballad of sheer beauty. The first of the pair comes with flared nostrils and a rhythmic blood lust as heavy metal and stoner-esque blues rock clash in ears. The song is breath-taking, especially when it switches to a folkish pasture of cleaner vocals and a simple but expressive melody midway. It only impresses more as the scene and sounds start building back up to another fire of intensive emotion and searing grooves. Its successor is even more tantalising and enslaving. Voice and guitar again align to create a mesmeric smoulder of blues folk and southern tinged melodic rock which simply delights. Whereas the last album had the transfixing unexpected melodic delights of Gaia, Omniscient has this absorbing treat to wrong-foot, surprise, and thrill.

Not that the album has a moment where it does not do all those things in varying degrees anyway, as proven by the boozy swagger of House of Salvation which stomps in next. The track with its bar room like blues grooving and abrasing riffery reminds of N Ireland band Triggerman in some ways, especially in the melodic toxicity veining the devilment and the magnetic flame of a groove which has the appetite licking its lips and body swerving in subservience. The excellent temptation is matched straight away by the funk nudged stroll of Night Bus Blues. Making the perfect soundtrack to those times after a show where the cold flirts as you wait for the over-due conveyance to take you home and that is only part of the recognisable drama, the track proves humour is never a missing ingredient in the recipes Desert Storm conjures. Obviously it is not lacking addictive sounds either, an adjective which perfectly fits both Bandwagon and Blue Snake Moan which follow.

The first revels in a seventies blues rock seeding, spawning its sonic tempting from a psychedelic scent as fresh as it is familiar. The song provides yet another shade of colour and striking originality to the album, Omniscient easily the bands most excitingly and enjoyably diverse and expansive offering yet. The second of the two bristles and bellows with the heavy rock ‘n’ roll sound that the band has always bred its imagination through. Again though, it is widely spiced and commandingly robust with an array of rock bred flavours inviting feet and soul to roll with its rigorous devilry.

The album closes with Collapse of The Bison Lung, a summing up of things in a way as ripe grooves and intimidating riffs collude with rampant rhythms and snarling basslines to bind attention and light fires in the passions. A masterful end to a mighty release it reinforces and confirms what Omniscient suggests and we declare, that Desert Storm should be mentioned in the same breath as bands like Black Tusk, Red Fang, The Sword, and yes maybe even Mastodon.

Omniscient is released worldwide via Blindsight Records on January 26th.

Following the album’s release Desert Storm will be going on a short European tour: