The Sick Side – Born to Kill 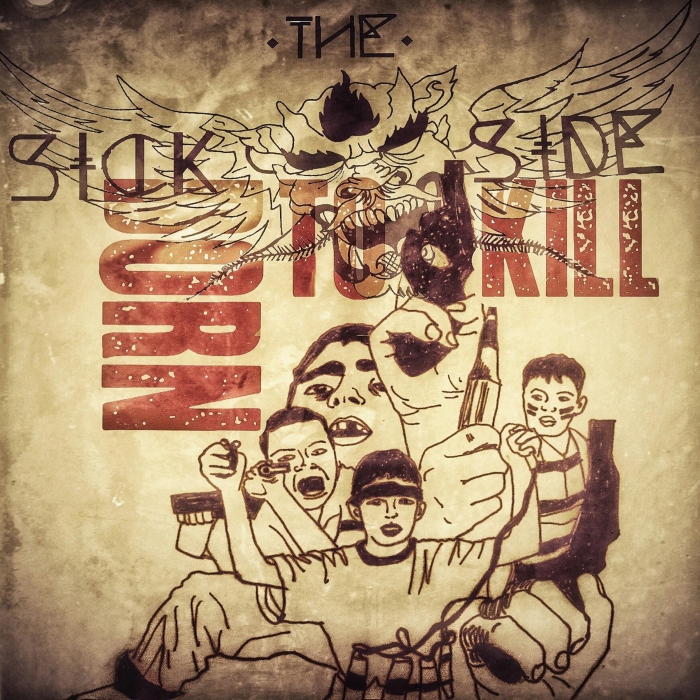 Bracingly raw and with an attitude and character as mischievous as it is antagonistic, Born To Kill the debut album from Spanish rockers The Sick Side, is like one of those companions you know you should not hang out with as they will only get you into trouble but you just cannot resist the anarchic and brazen seduction. A brawl of hard rock and heavy metal with a very healthy fuelling of punk rock, the release is a potential soaked riot of fun, unclean rock ‘n’ roll from a band which breeding a keen appetite for is very easy.

Storming out of Montblanc, a town in the Catalonian province of Tarragona, the quartet of Xavi Granados (vocals /guitar), Xavi Nuez (vocals /guitar), Sergio Martinez (bass), and Joan Pérez (drums) equip their album with a middle finger driven sound and adventure which demands and commands attention. Formed in 2012 and conducting their first rehearsals and song writing exploits in a garage right next to a cemetery, the perfect landscape for the creation of their devilish brew of sound it is easy to suggest, The Sick Side spent the following year working towards and on Born to Kill. Recorded at the Más Allá Studios in Valls, the album is an instant ear grabbing and furious incitement of energy and tenacity. As mentioned it is a raw and rough around the gills encounter but one we suggest fans of filthy punk and rock ‘n’ roll will get a real kick out of.

The album’s first track Looking For quickly lays down a tasty indication of what is in store within Born to Kill. Though not the strongest track on the release, its snarling vocal led weave of sonic enterprise and thumping rhythms within a caustic wall of riffs is a flavoursome appetiser for bigger things. Essences of Judas Priest like metal, Motorhead bred antagonism, and melodic toxicity collude from within the song to add further bait to the not remarkable but solid opening, an entrance backed forcibly by the Turbonegro like She Is A Whore which follows. As the first song, the craft and imagination of the band is captivating bait within the caustic rock ’n’ roll shaping the proposition, but there is a brighter spark of energy to it which sets up ears and appetite perfectly for the next step forward which comes in the fiery shape of Hanging Around.

The album’s third track has feet and emotions hooked from its opening lure of bass and a swiftly aligning roll of beats. Both Granados and Nuez share the vocal lead across the album, a mix and variety which only adds to the unpredictable nature and adventure of songs, and as shown here when those vocals come in hand in hand with a spicy blaze of guitar sculpted sonic design it works a treat. The hints of punk which whisper in the opening pair of songs is a broader and louder anthemic roar here too giving a great simplistic balance to the skilled and inventive veining of guitar endeavour alongside. Ramones meets Crashdiet; the track is a contagious stomp pushing the album up yet another notch with ease.

Both the heavy rhythmic stride and imposing presence of Jenny and the tangy blues shading of Alice hold ears and appetite firmly bound in catchy intriguing persuasion. The first of the two has a more serious nature to its character, parading a less rebellious and slightly more composed weight to its presence whilst its successor toys the senses with a blues garage rock spicing, both adding variety and fresh adventure to the album. Each also has glimpses of a more Billy Idol like glam punk spicing at their hearts, just whispers but proving more colouring to their resourceful and pleasing offerings.

Things continue to grip body and thoughts as Lights Are Always Bright romps with pop punk devilment, well pop punk caked in scowling vocals and riffs which collude with unpolished barbed littered hooks. It results in a tightly grabbing contagion which is emulated by a song called Track 1, where again heavy rock and melodic punk unite to create an abrasing confrontation with searing heavy metal veining alongside attention holding craft from the band. Both tracks keep things moving along enjoyably before the devilry of A Crime Against Humanity with its distinctive vocal delivery and addictive rhythms, steps up to forge another peak in the presence of Born To Kill, a new level reinforced by the album’s title track and the outstanding War. With a touch of hardcore punk teasing in the first, and heavy metal rabidity colouring the brilliance of the second of the three, the band leave the third to add the juiciest onslaught of the album. War is a belligerence of riffs and rapier like beats from its first breath, the band uniting them and the subsequent roar of vocals and bass predation in a thrash inspired stalking of the senses with a nice feel of Testament to its voracious heavy rock tempest.

The final two songs of Lady Pheromon and The Sick Side impressively and easily ensures Born To Kill ends of a high. The first is an addiction forging slice of punk rock with another chorus to swiftly succumb to whilst the latter stomps around with stirring attitude and a punk metal swagger helped along by another excellent dark bassline courting a potent weave of riffs, hooks, and acidic grooves.

The two tracks make an enjoyable and ruggedly persuasive end to an outstanding introduction to The Sick Side. The album is unpolished and hostile, organic and ready to tear your head off, exactly as all dirt smothered rock ‘n’ roll should be from a band which can only grow and develop an even more striking and dangerous nature…something to eagerly anticipate on the evidence of Born to Kill.

Born To Kill is available now as a name your price download @ http://thesickside.bandcamp.com/releases