Having ten years or so to hone a flavoursome and attention grabbing sound around Southern Saskatchewan and beyond, Canadian rockers Maxstone finally released their debut a few months back, a stirring encounter going under the name of The Decade EP which all fans of metal and punk infused rock ‘n’ roll should add to their must investigate lists. Bringing two older songs with a couple of newer written encounters, the release is a seriously enjoyable bruise of the ears bringing a mix of Strung Out, Red Tape, and Thrice like ferocity to their rugged party. At times there is even a hint of Reuben to the creative fire of songs and though the EP is not flushed with striking originality, it only leaves thick satisfaction and fierce appetite for more in its wake.

Made up of Nathan Fafard, Gelvis Sheldon, Brett Marit, and Jordan Godson, Maxstone sets things off with Battle and immediately guitars are a blaze of sonic enterprise amidst a bracing provocation of rhythms. It is a sturdy ear catching entrance which soon embraces similarly raw and impassioned vocals without breaking stride. Punk at its heart but with a delicious veining of 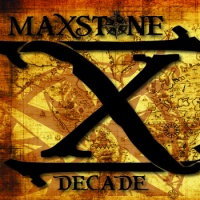 metal seeded grooves and sharp hooks, the energetic and at times almost chaotic bluster of the song is as appealing as the technical craft and imagination flirting from within the impressive opener.

The following Mystery Whiskey is built from the same template, its intensity and passion as forceful and busy as in its predecessor. Musically there is less of a roar in the second track than the first, but with the vocals losing none of their thick expression and the chorus finding stronger virulence, the song keeps the EP on a potent and magnetic course before being eclipsed by the final pair of songs.

Panic stomps in first, beats a scything provocateur against the spicy grooves of the guitars. Vocally there is a slight restraint which works a treat as bass and guitars cast their web of melodic punk and metal seeded sonic enterprise. Group calls back up these potent aspects as the song progresses, its anthemic strength accentuated by their roars within another enjoyable weave of fierce melodies and punchy rhythms. Completed by a brief but great classic metal toned solo, the track makes way for the outstanding Greed. The best track on the release it is a blast of punk hostility and heavy rock predation driven by the blistering and skilled force of the drums. Full to the brim with searing sonic hooks and throaty bass grooves aligned to another dose of anthemic vocal persuasion, the track is a rampant incitement which only increases its lure, weight, and intensity as it heads into a heady climax fuelled by the exhausting and scintillating assault of the drums.

The Decade EP is an impressive start to the band’s recording career, the first of many potent encounters a great many will be hoping as it gains broadening attention. It is not going to set the world on fire but for heart felt antagonistic punk ‘n’ roll it will leave no one wanting, only hungry for more Maxstone.