As much as we all hope the next new thing we listen to will be an inflamed love affair for ears and the passions, sometimes a just as enjoyable contemplation is a proposition which manages to leave thoughts and emotions balanced between high praise and dissatisfaction. The new No Love Lost EP from UK post hardcore band A Room Swept White is such an encounter. Consisting of five tracks which at times with their raw persuasion ignite a lusty appetite for the band’s imagination and attempt to stand out from the crowd, the release is a potential soaked and ultimately promising first look for us to a band beginning to brew up a buzz. Tempering its success though, those same songs also provide a senses smarting abrasiveness in certain moments which rub personal tastes the wrong way. It all results in a sizeable confrontation which as it twists and tries to find its feet, provides a presence that ensures A Room Swept White will not be simply a passing interest.

Hailing from Crawley and Horsham, A Room Swept White formed in 2011 with the intent “to create a sound that inspires and attacks the senses.” From the first few seconds of the new EP it is fair to say that the quintet has that angle covered quite potently. They create a persuasion which live has impressed forcibly, as shown by gigs alongside the likes of Heart In Hand, Hacktivist, Bury Tomorrow, Feed The Rhino, Bleed From Within, Soulfly, POLAR, and many more persistently drawing strong praise. They have a stage power and intensity which you can suggest has not quite been discovered on No Love Lost, but as implied earlier, their promise is all there to be heard on the band’s new release.

It opens with the evocative melody fuelled Recollection, a brief caress of emotive guitar and cleanly delivered vocal angst over rugged rhythmic scenery. It is an inviting lure taking the listener 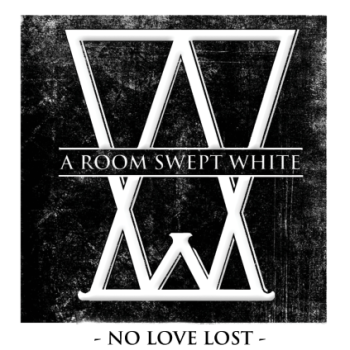 straight into the hoarsely throated This Life. The second track immediately assaults with heftily swung beats from drummer James Farrant against just as antagonistic riffs. Twists in the already inventive designs of guitarists Alex Kirrage and Michael Flood catch the imagination before the coarse vocal rage of Ryan Elliott adds to the antagonistic intent. It is a strong start which finds greater energy as the frontman expels his angry breath, an increase in intensity matched by the guitars great enterprise and the darker moodier basslines of James Nicoll. A further enticing colour comes with the clean vocals of Kirrage, firstly as a backing aligned to the calls of the band. It is a great mix and the track is soon winning over thoughts and appetite, especially as it slips into something melodically and atmospherically more comfortable at one point.

The song flows into the EP’s title track and it too is soon badgering and energetically squalling over the senses. Bulging with uncompromising rhythms and vocal predation courted by coarse riffery, the song is a maelstrom of fresh ideas and at times genre familiarity. It works well but is missing something compared to its predecessor, though the clean vocals and imaginative endeavour of the guitars is a tasty extra.

Vocally is where the EP seems to be raising most debatable points with people, though most seem to praise the hostility of Elliott over the warmer tempting of Kirrage. Personally it is the other way round where the band on this encounter flourishes; the latter providing great and impressive contrast to the less adventurous assault of his band mate. It is all down to taste of course but it would be good to see Elliott mixing up his venomous stance in the future to break the almost overwhelming causticity which at times defuses the success of the creativity elsewhere. Songs like the next up Time Heals especially blossoms from the angst soaked ire dripping from Elliott’s fine attack though, and just as pleasingly from the sonic adventure and melodic flames which wrap around the impressive bait set down by Nicoll and Farrant.

From the best track on the release, No Love Lost ends with the more than decent if slightly underwhelming Better Days. Like the third song on the EP, despite highly agreeable ideas and skilled enterprise, the song is missing the fire of certainly the previous incitement of ears. As No Love Lost as a whole, there is still plenty to get strong satisfaction from and things to be unsure about with the final outcome being that A Room Swept White is a prospect needing more keen attention. Both band and release provide pleasing and enjoyable company but are accompanied by a feeling it is still early days and there will be stronger and more exciting things to judge ahead.

The No Love Lost EP is available from January 12th through all digital platforms.