Home › Music › Album › Grandchaos – We Suffer When The World Changes

Grandchaos – We Suffer When The World Changes 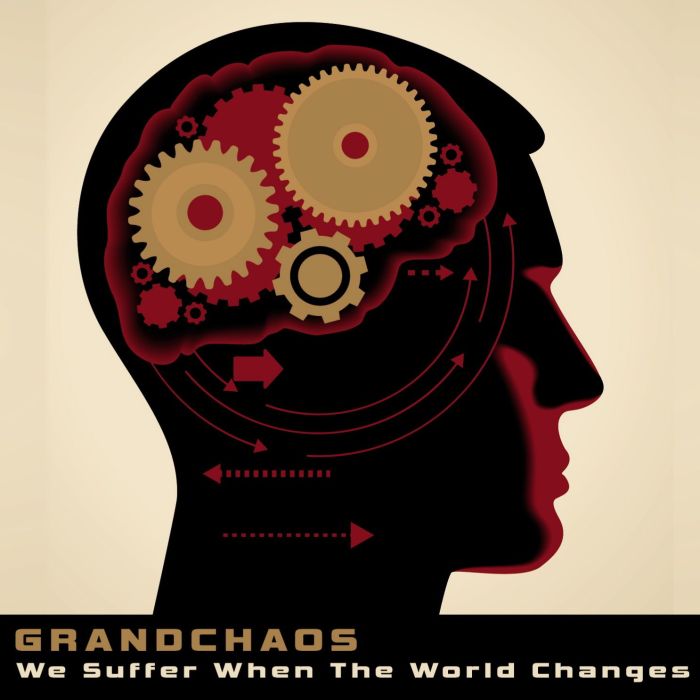 Though We Suffer When The World Changes is our first real confrontation with Belgium based Grandchaos, it did not take long to show that the praise of others was deserved as the thoroughly addictive lure began stealing the passions. For fans and on the musical reputation of its creator Russian composer/musician Tcheleskov Ivanovitch who has been setting inspirations and templates within EBM for over three decades, its weight and quality was maybe unsurprising but it is still provided a fresh and impacting encounter once directly in the ears. So consisting of sixteen tracks, including a clutch of remixes, the album showed itself to be a riveting dance for body and imagination cast from a tapestry of sounds which as Ivanovitch’s career, spans the years of electronic temptation.

Tcheleskov moved to Brussels in 1982 with brother Trevosky, where the pair formed Ivanovitch Dans L’Ombre and were soon heading towards cult status for their irrepressible creative sounds and releases. The early nineties saw the duo bring the band to an end to focus on their professional careers but after time Tcheleskov had the itch to pursue a solo musical adventure and founded Grandchaos. Exploring a minimal electro sound, the artist quickly found attention and support which led to the release of the acclaimed debut album Open Source in 2007. The following time saw him link up with and play live in Jacky Meurisse’s EBM band Signal Aout 42, release second album Rumours of My Life and earn further acclaim for his inspiring sounds. We Suffer When The World Changes has, just a few weeks after its unveiling, already made the biggest impact yet for Tcheleskov, its weave of eighties electronic melodies alongside new beat and techno vivacity under dark but alluring shadows, a primal calling for ears and emotions.

The album opens with The Light and features Meurisse helping shape its shady character and swiftly riveting presence. A slightly desperate vocal breath aligns to the heavy pulse of the track from the start, toying with the imagination nicely before finally settling into a transfixing mesh of sound. It is a vibrant tempting but elevated by the instantly compelling baritone bred vocals of Tcheleskov. Menacing and inviting, the song continues to sonically flicker in ears, lighting their hunger before making way for the similarly drama cloaked Man On Fire. The shadows are darker and heavier on the second song but it counters by offering a busy scene of electro revelry and virulent catchiness. At times slithers of Rammstein antagonism seep into the enthralling electronic narrative but also the edge of a Cynical Existence and most of all the flirtatious tenacity of Yello.

Love And Hate moves down a different avenue with its eighties synth rock and progressive electro gait, though it’s spatial soundscape and low key festivity is wonderfully tempered by the ever pleasing and bordering on morose vocals. Like a wallflower in a dance hall, the song is siren-esque in its voice and reserved in its energy but another seriously engrossing encounter sharing its charm before the sonic and expressive palpitations of The Death Of You And Me embraces feet and senses. With new diversity to the vocals as Meurisse again adds his skills to its masterful flight, the track sparks a wave of warmth ready for the spicy static taunting of The Tempest. The Swiss electronic genius of Dieter Meier and Boris Blank return as a spice and comparison in the first of these two but even more so in the fuzzy and dazzling dark waltz of its successor.

The anthemic dance of both incitements is replicated in the haunting and intimidating Pulse (909 version). It has an industrial rawness which aligns itself to a melodic radiance, a merger bringing rich life to the danger washed body of the track. As in most songs, there is plenty for ears to interpret but more for the imagination to run with and set about casting their own noir bred adventures with the music as their soundtrack.

The inescapable virulence of We Suffer is next, its body sparking bait infusing eighties electro pop into another addictive flirtation with the dance-floor. A song which could even bring the residents of a cemetery to life it is the obvious lead lure into the release and if not already should be a single. Just as contagion soaked is the following and also outstanding Memory Is A Poison. Unafraid to bring a vein of post punk, Tcheleskov finding an Ian Curtis lilt to his monotone voice, into another eighties inspired hypnotism, the song ultimately steals top track honours from the throat of its predecessor and the earlier peak of The Tempest.

Both Tell Me You Love Me, with its angst rubbed croon and energetic skittishness, and the melodically syrupy Pulse (808 version) keeps satisfaction and feet fully involved whilst End Of Transmission is a potent if less gripping relaxed tango for the senses. Though not the end, it makes for a fine conclusion to the main body of the release leaving some decent remixes from VV303, #366 : A Live Lifed, Parade Ground, and a couple of thumping alternative views of songs on the album from Ethan Fawkes and Atropine to complete the impressive encounter.

The album is a masterful instigator of bodies and unbridled enjoyment. Grandchaos has injected fresh blood into the already flavoursome world of EBM but more so it has the potential to open the scene up to a new audience. We suggest everyone should seriously contemplate plunging into We Suffer When The World Changes if only to make their feet happy.

We Suffer When The World Changes is available now via EK Product @ http://www.ekproduct.com/artists/grandchaos